Tornadoes have hit Wales and the Midlands, driven by a cold front blasting in.

Interestingly enough, Britain actually experiences more tornadoes than America does per area, but few of them ever reach above F2 in strength, a mere 157 mph wind speed not really grabbing the same headlines, or for that matter threatening nearly as much damage, although they still can and do cause damage and injury. Birmingham was hit in 2005 by a tornado which did about forty million pounds worth of damage, for example. However, most of our tornadoes simply whip lightweight items into a vortex, and then dissipate having caused nothing more than rustled feathers and overturned garbage cans.

The tornadoes striking Wales and the Midlands appear to have taken down some trees, overturned some caravans, and caused a bit of havoc generally, but no deaths have been reported as of yet. I would hope that trend continues as the weather calms down, which it is reported to do throughout the rest of the afternoon.

posted on Nov, 17 2016 @ 09:26 AM
link
a reply to: TrueBrit
Wow True I didn't realize that you guys also got them. No way would I want to live in Tornado Alley. I love to watch their power but only from a distance and hopefully when it is crossing an empty field.

posted on Nov, 17 2016 @ 09:27 AM
link
Our topography and geography usually prevents the winds reaching US tornado speeds but that geography and topography can on occasion have a wind funnelling or concentration effect. Like you say not unheard of, but always of interest and ignored at peril.
edit on 17-11-2016 by CulturalResilience because: (no reason given)

posted on Nov, 17 2016 @ 09:29 AM
link
I was sat at my usual spot watching the Kingfishers when that front moved in. Thought I'd sit out the wind and rain but as it got heavier and the trees really started swaying I thought it best to move rather than risk being battered by a falling branch or tree!
The wind really picked up even more as I made my way back to the car along the canal path and the rain was really stinging my face where exposed.... got absolutely drenched, but the camera and lens are weather-sealed so not worried on that count.

Now back to bright sunshine again so might head out at dawn tomorrow as there may be a frosty start to the day and a few more photo opportunities!

We get them here in Australia as well but i prefer to call them by the name i knew them as growing up . Willy willy . Rarely are they very destructive fortunately as on some hot summers days you might see several at the same time .

nice and only posted on BBC 36mins ago. Quick job .

i live in the midlands and the wind has sounded crazy, not gone outside much today though.

Ah HA! A member on the scene!

Well, if you would not mind offering us an up to the minute update on the state of the weather where you are, I would be extremely grateful!

posted on Nov, 17 2016 @ 10:32 AM
link
I was visiting on the phone with a friend who had commented on the stalled jet stream. Prior to that there was a discussion about the lack of Sun Spots and solar activity. It has been recorded and is said to go in cycles. Seems we are in an absence cycle.

Weird weather ? It seems about like average here on the east coast beyond the lack of hurricanes in recent times. Of course the weather we have reaches your location a couple days after we experience it, much like the Pacific current.

Stay safe, and keep doing what your doing.

Good thing there was no-one in these caravans. 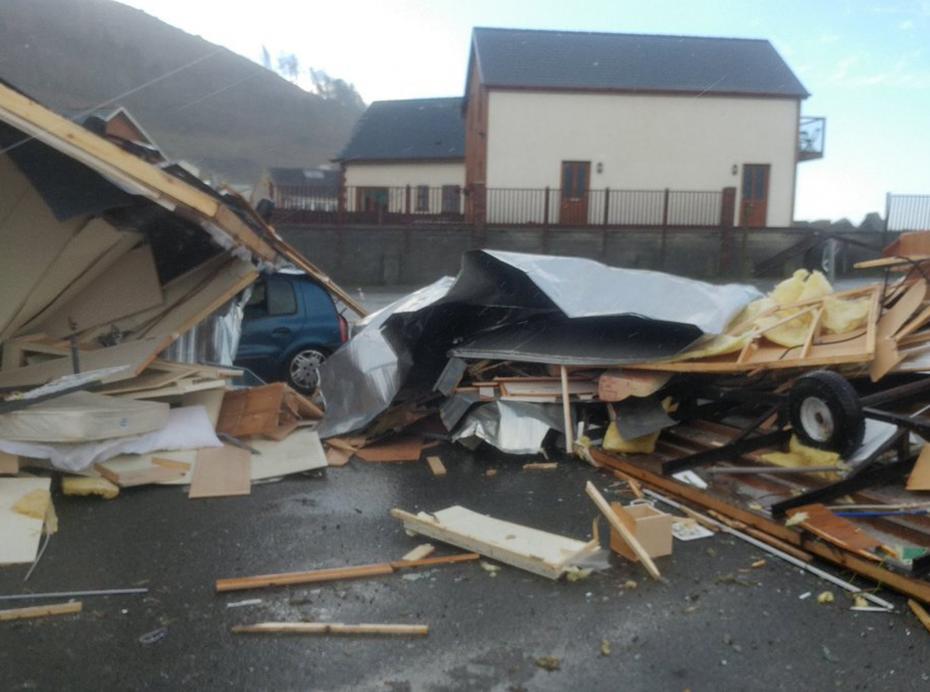 From what I understand, that shot was probably taken at the caravan park that got hit yesterday. If I recall the article correctly, it stated that the park was closed for the off season anyway, so no one was actually in the toppled shelters.

Love your work mate, yes it is unusual for you to have tornadoes where you are, what about cyclones ?

Its always time for !

But it is not at all unusual for us to have tornado activity in this country, except ordinarily speaking, the most they do is whip up lightweight trash, cigarette ends, crisp packets, paper products and plastic bags, into swirling vortex shapes.

I recall being at a rock festival about thirteen years ago, where such a vortex trundled across the campground, picking up all the detritus left by many tens of thousands of music fans. I remember thinking to myself that the chances were that the vortex ruined someones weekend in all probability, but also that its gentle twisting, the motion of the material it swept up, was quite elegant and graceful.

It sounds as if you like a good mother nature event as i. We both live in fairly safe areas in regards to heavy contact, though unfortunately you get more rain, we need some more here, i have mates over there, alot doing bar work , haha, and they miss the sun they tell me, but i do agree, there is nothing like a good storm, they are elegant and graceful, and look forward to every event mother nature grants me.... apologies for the commas.....BEER

posted on Nov, 18 2016 @ 12:57 PM
link
I must've slept through this, although I did notice yesterday that the clouds looked rather menacing at some point. Birmingham is a raised area so it can be vulnerable to extreme weather, it can see a lot of snow as well. Not too long ago we had some "shelf clouds" or something, I forget what they're called now, very dark on one side and clear sky on the other, throwing about a lot of lightning with virtually no thunder - that freaked me out, I thought we'd gone to war.

posted on Nov, 18 2016 @ 01:11 PM
link
Although tornadoes do hit Britain (although oddly there has been a drop in annual numbers in recent years) - indeed, we get more per square mile than the US - there is as yet no confirmation that any of this damage was caused by one. The damage occurred during the passage of a squally cold front and in most case straight lines winds are more likely to have been responsible.

Ironically, and increase in public knowledge that we get tornadoes - albeit not as strong as some other parts of the world - has led to an assumption that any sudden wind causing damage must be a tornado. Making the job of investigators more difficult.

One local newspaper did publish a video of a funnel cloud but this has been dismissed as it was clearly taken earlier in the year (trees in full leaf).

Hey, sorry i was away from ATS for a while. Personally i have not much to report here in Nottingham. other than my car is really dirty maybe from all the dust and dirt. Sorry i had nothing more exciting to announce

did not even see a wheelie bin fall over.