Thousands saw a plane circling the Denver metro area late Wednesday morning, questioning where it may have come from and what it may be doing. Officials at a host of federal organizations had few answers. Denver7 began tracking a flight named IRON99 as it traversed from California over the pacific. It traveled over the Rocky Mountains and eventually over the Denver metro area.

When contacting the military, including both U.S. Northern Command (NORTHCOM) and United States Strategic Command (STRATCOM), neither organization could confirm the identity of the plane, or even locate it.

"The North American Aerospace Defense Command (NORAD) also investigated the flight, however they couldn't locate the flight or confirm its existence. When asked if the flight might have been a high-profile person, officials said the only high-profile flights in the air were in New York and Indiana.

When asking the Federal Aviation Administration (FAA) about the flight, there was no information immediately available, however the organization said it would continue to investigate.

It's not known what the flight's purpose was, but Denver7 can confirm its destination wasn't in Colorado."


Im surprised Zaphod58 hasn't posted this already. I can't believe I beat that guy to the punch on a aircraft related post LOL.

But this is pretty weird. They are saying it was prob a military flight but neither NORTHCOM or STRATCOM could locate it or identify it. So much for feeling safe at home if this plane can just fly over an airforce and several states base without checking in.
edit on 17-11-2016 by PraetorianAZ because: (no reason given)

originally posted by: carewemust
RE: www.dailymail.co.uk...


LOL Good luck with saying that.

posted on Nov, 17 2016 @ 01:37 AM
link
a reply to: PraetorianAZ
Intriguing. This sort of thing is why I signed up for this site.
Am I wrong? It appears that it is coming from Travis Air Force Base: 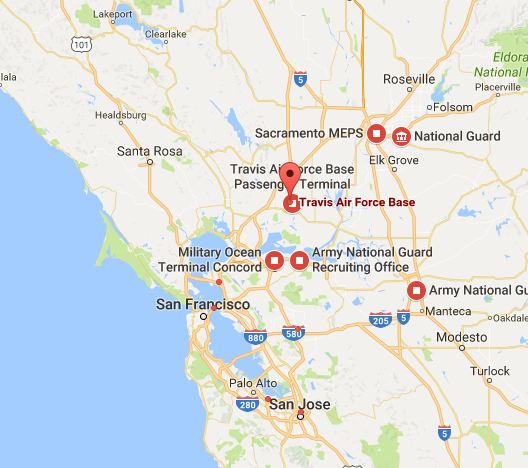 posted on Nov, 17 2016 @ 01:50 AM
link
So am i correct in thinking that local ATC where unable to get a response from the aircraft?, if that is indeed the case there has to be some protocol when flying within the airspace of a busy city?? Esp one like Denver that has by all account a very busy commercial airport...

Then again, I thought they used small Cesna-type planes for that.

I've flown all over US airspace listening in on both civilian and military freqs and I have never heard of something this weird.
edit on 17 11 16 by projectvxn because: (no reason given)

That's an interesting idea. But I assume a Cessna would be power limited and therefore not be able to intercept as many signals due to limited equipment. However something large like this with those big, powerful engines could produce enough power to maybe tag an entire cities worth of cellular and wifi data.

ATC doesn't always talk to aircraft en route. If they're on a VFR flight plan or MARSA and didn't request flight following services. As long as they don't enter controlled airspace they only have to have an active transponder.

In this case they were probably talking to him since they have a callsign.

Mercury has very limited SIGINT capabilities. It's a command and control aircraft.


In this case they were probably talking to him since they have a callsign.

Could they have been on one big ass holding pattern? If so, for what? And Denver airspace is class B, so not talking isn't an option.

Also, why would they fly VFR in broad daylight with zero clouds in the sky while maintaining a very long holding pattern after coming across the pacific? They didn't even land there, and no one seems to have any answers as to who it was...On the MARSA aspect, I don't see it either if it wasn't a military aircraft. Doesn't seem to be secret either considering how conspicuous it was.
edit on 17 11 16 by projectvxn because: (no reason given)

A holding pattern like that, with a military aircraft is most likely a refueling track. They probably came in, hit a tanker for a little extra fuel to have on board, and headed back to Offutt. They go VFR/MARSA for refueling. They said they were at around 32,000 which is a common refueling altitude, because it's below the normal commercial routes.
edit on 11/17/2016 by Zaphod58 because: (no reason given)

Sorry I got VFR mixed up with IFR. I'm tired right now.

You'd think we'd see the tanker in the video.

originally posted by: projectvxn
. Doesn't seem to be secret either considering how conspicuous it was.

Mercury and NAOC are almost never discussed with the media because of the nature of their mission and their capabilities. You can't really hide them when they're flying though.

I said most likely, not certainly. They may have had to hold for something at Offutt, so they held over Denver. Or it could even be that he was waiting for the tanker and it broke and didn't make it.

Daily Mail is a tabloid. Of course the headline is outrageous.

posted on Nov, 17 2016 @ 05:16 AM
link
If it crossed the Pacific I am sure it was challenged at the boundary of the US air defence zone. The military cleared the entry or combat intercept aircraft would have been on it.

Class B air space is like an upside down wedding cake. I have flown under it many times.