I still think my prediction would be valid.

Even with all that dirt against sanders.

You and I will disagree then. But having seen the GOP smear their own members at times in the past, I see things differently.

Here are a few tastes of what was in store for Sanders, straight out of the Republican playbook: He thinks rape is A-OK. In 1972, when he was 31, Sanders wrote a fictitious essay in which he described a woman enjoying being raped by three men. Yes, there is an explanation for it—a long, complicated one, just like the one that would make clear why the Clinton emails story was nonsense. And we all know how well that worked out.

Then there’s the fact that Sanders was on unemployment until his mid-30s, and that he stole electricity from a neighbor after failing to pay his bills, and that he co-sponsored a bill to ship Vermont’s nuclear waste to a poor Hispanic community in Texas, where it could be dumped. You can just see the words “environmental racist” on Republican billboards. And if you can’t, I already did. They were in the Republican opposition research book as a proposal on how to frame the nuclear waste issue.

Also on the list: Sanders violated campaign finance laws, criticized Clinton for supporting the 1994 crime bill that he voted for, and he voted against the Amber Alert system. His pitch for universal health care would have been used against him too, since it was tried in his home state of Vermont and collapsed due to excessive costs. Worst of all, the Republicans also had video of Sanders at a 1985 rally thrown by the leftist Sandinista government in Nicaragua where half a million people chanted, “Here, there, everywhere/the Yankee will die,’’ while President Daniel Ortega condemned “state terrorism” by America. Sanders said, on camera, supporting the Sandinistas was “patriotic.”

The Republicans had at least four other damning Sanders videos (I don’t know what they showed), and the opposition research folder was almost 2-feet thick. (The section calling him a communist with connections to Castro alone would have cost him Florida.) In other words, the belief that Sanders would have walked into the White House based on polls taken before anyone really attacked him is a delusion built on a scaffolding of political ignorance.


originally posted by: monkeyluv
And yet they voted for a billionaire who became wealthy thanks to government support. 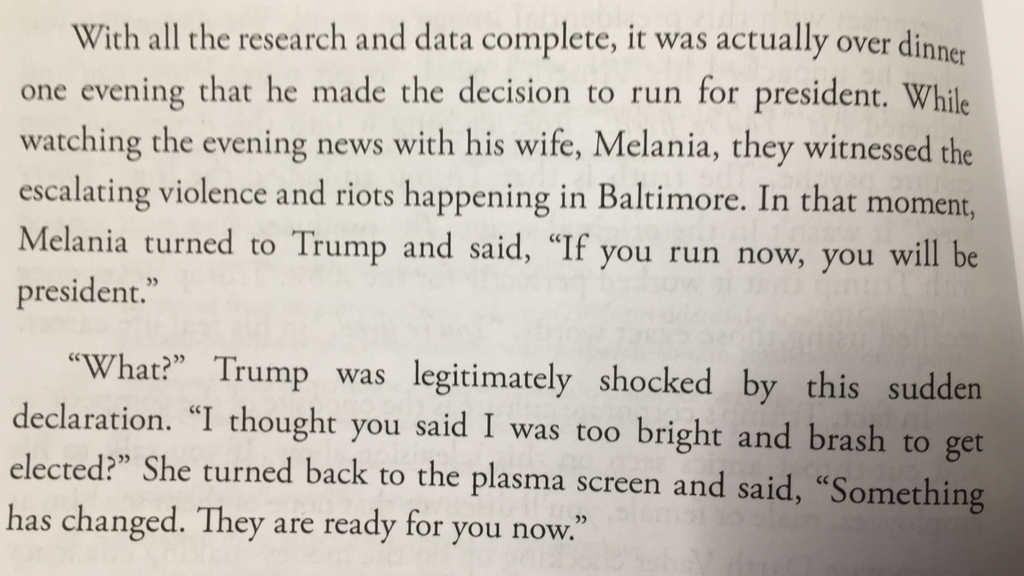 Sound bites and the "blame game" don't work anymore. The spell is broken. Try and keep up.


I googled the baltimore riots.


My greater source of personal concern, outrage and sympathy ... is focused neither upon one night's property damage nor upon the acts, but is focused rather upon the past four-decade period during which an American political elite have shipped middle class and working class jobs away from Baltimore and cities and towns around the U.S. to third-world dictatorships ... plunged tens of millions of good hard working Americans into economic devastation and then followed that action around the nation by diminishing every American’s civil rights protections in order to control an unfairly impoverished population living under an ever-declining standard of living and suffering at the butt end of an ever-more militarized and aggressive surveillance state. The innocent working families of all backgrounds whose lives and dreams have been cut short by excessive violence, surveillance, and other abuses of the Bill of Rights by government pay the true price, an ultimate price, and one that far exceeds the importance of any kids' game played tonight, or ever....


Quote is also sourced here:
www.newsweek.com - As Riots Consume Baltimore, Orioles Postpone Baseball Game...
edit on 11/16/2016 by jonnywhite because: (no reason given)

originally posted by: 727Sky
As Trump said he payed for that support with money given to career politicians .....
And a career politician with two hundred and fifty million in the bank (favors and speeches and the all important Clinton foundation) does not raise eyebrows by the devoted; give me a break !

Given the fact that I also don't support Clinton, then I think you just proved my point.


originally posted by: monkeyluv
And yet they voted for a billionaire who became wealthy thanks to government support.

Sound bites and the "blame game" don't work anymore. The spell is broken. Try and keep up.

This, from someone who just posted the equivalent of a sound bite. Talk about irony.


You work in the office with HVAC on 24/7/365. You go to gym after work, watching news from CNN or NBC on the treadmill. Then you eat your dinner out somewhere with a friend, probably not cooking at home. Sometimes you fly between NYC/Boston and LA/SFO for business. When you look down from the plane window and see those endless farmlands and mountains in the midwest, you are thinking “I can’t imagine living a life down there.”
When you saw Trump won, you were shocked. Holy !@#% There’s not a single person around me who supports Trump, how could he win?
That’s where the problem is. You are living in a completely different world than those Trump supporters.

Sometimes it takes somebody who is not emotionally tied to the situation to evaluate it more accurately.
How many middle aged men that were college educated managers supported their families on 60K a year before 2008 and are now working at some lousy service job at some big box store with low wages and terrible hours.


Not based in reality.

Wtf is that guy talking about? Fantasy weirdos. No sympathy for his targets either. Middle management in America is the most poorly performing group in existence. Overpaid and filled with idiots. You're talking about 8 years ago. You can get an MBA in a 1/4 the time. The real question is, what did these people do to better themselves and get ahead while they were working their crap overpaid Walmart manager job? Nothing, which is exactly why they got left behind. Anyone who has worked in a big company knows about those useless $60k a year managers. Worthless positions. They work at Best Buy and never got asked back to the big show because they have no real skills and suck up all the oxygen. They were surpassed by younger, smarter, harder working people with skills that we can use for the future. I know because I'm one of them that surpassed these lazy slugs. There's good jobs out there for go getters and people who have in demand skills. I interview all the time for great positions. There's just no need for generic people who can only offer uselessness. They got too comfortable telling younger people what to do and some of these newly educated kids offer so much more as human beings. Sorry you got beat in the field of battle Best Buy managers. You sucked to begin with.


originally posted by: grey580
Now if Bernie would of run vs Trump. We'd have Democrat as President Elect.

I have seen the opposition book assembled by Republicans for Sanders, and it was brutal. The Republicans would have torn him apart. And while Sanders supporters might delude themselves into believing that they could have defended him against all of this, there is a name for politicians who play defense all the time: losers.

The Myths Democrats Swallowed That Cost Them the Presidential Election

For a read on Sander's "dirt", read the source. Brutal. Republicans are not beyond political torture.

That was an interesting article, but it lost its power once I read