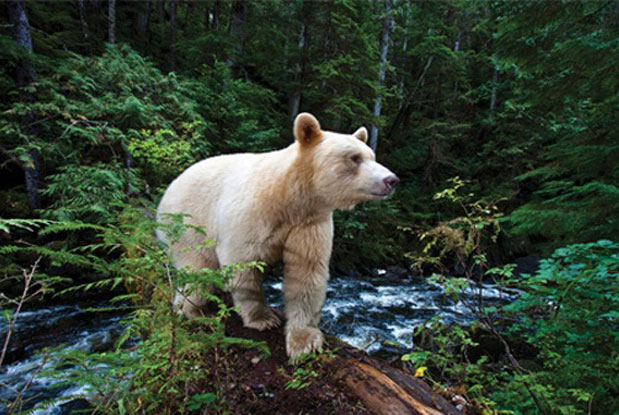 I watched a documentary yesterday evening about a bear, more to it, a unique bear in the forests of British Columbia, its called "The Spirit Bear"
--

The Kermode bear (Ursus americanus kermodei), also known as the "spirit bear", is a rare subspecies of the American black bear living in the Central and North Coast regions of British Columbia, Canada. It is noted for about  1⁄10 of their population having white or cream-coloured coats like polar bears. This colour is due to a double recessive gene unique in the subspecies. They are not albinos and not any more related to polar bears or the "blonde" brown bears of Alaska than other members of their species. Sometimes, a mother Black bear can have a white cub.

In the light of day, the spirit bear is a special species of black bear known only to a select few that live in the British Columbia area as well as a handful of islands near Alaska. It is an all-white bear known as Kermode Bear. However, for the Native American culture, the Kermode bear is known as the Spirit Bear.

According to one of many Native American stories, the spirit bear was made white by the creator of the universe to remind its people the past period of time known as the ice age. It was said that the creator did this to remind the native people of the previous hardship living in all the snow and ice. In addition, in some tribes, the white spirit bear stands for harmony and peace.

It is thought that a spirit bear exists in about ten percent of all black bear births. In actuality, the existence of the spirit bear can be blamed on a recessive characteristic in their genes. The spirit bear really is not all white. In truth, it is more off-white or creamy in color. The spirit bear, also known as the Kermode bear, exists in British Columbia as mentioned before.

The number of sightings dwindled for years due to a lower spirit bear population. However, thanks to some protection from the Canadian government, the Kermode bear is slowly climbing in numbers. It is mostly found in the British Columbia area of Canada, specifically the islands of Prince Rupert or Princess Royal.

This legend starts ten thousand years ago when the world was covered by frozen glaciers. The glaciers were covered in ice and snow. No one knows how long it had been like that, but the first story recorded was of Raven, The Creator.

The stories remembered and told today, all began at that time.

Raven or Ravin, North American or European, we all have roots with ravens as powerful iconic figures in our cultural and personal mythologies. Ravens are still kept, caged in the Tower of London, to ensure the throne’s future.

In this Kitasoo First Nations story of Raven, long after he had descended from the heavens and created The Green. Then along came the humorful Fire theft story. No one’s trusted Raven since. Then Man started popping out of seed pods along with the first woman. Raven had created it all. And yet…

Raven was not satisfied. Raven wanted something to remind him of the Long White Time of before. So he chose Bear, the keeper of dreams and memory to help him out. Raven sought Black Bear out. He didn’t have to go far, as he is always seen as a constellation of the stars in the night sky.

Raven made a pact with Black Bear. Black Bear agreed after he was given huge assurances from Raven, that he could live in peace and safety for all time, by letting one out of every ten Black Bears turn white. This was for a reminder for Raven of the misery of the great ice age of before. The White Bears to this day are still called Moksgm’ol, by the Kitasoo and T’simshian people.


The Legend Of Moksgm'ol: The Spirit Bear - Documentary Films
--

Kermode Bear
Indians.org
edit on 20161115 by tikbalang because: image