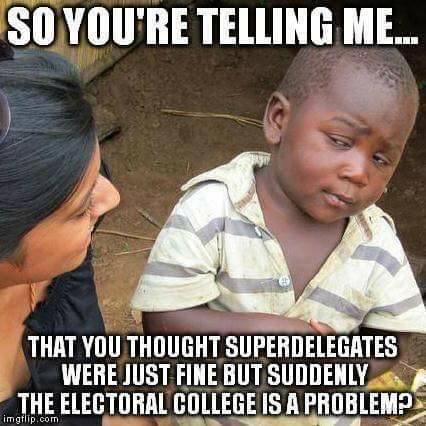 I do not think that Mr Sanders is in any way backing the protestors.

What he is trying to make clear to Mr Trump, is that what you are seeing in the crowded streets of American cities during these protests, is inevitable given the position that Mr Trump is placing people in, by being the sort of person he is and approaching the White House closer every day.

I would suggest that many of these people are very angry with Mr Sanders right now also, since he backed Clinton, and what the people want is leaders they can trust not to compromise on their values, AND leaders whose values reflect or at the very least roundly defend their own.

I would have thought that this is an appeal to Mr Trump to make amends with the people he built his campaign around the dehumanisation and vilification of.

He's supporting the right to assemble and free speech. More than half the population of the U.S. supported Clinton, so protests are to be expected.

Anybody who doesn't question our current system, the reason the electoral college was designed and if it is now obsolete, doesn't know how to think.

Take a look then at what Bernie Sanders supports!

Basically the overthrow of the US government. Screw the rule of law, let anarchy rule until we get our way.

This is being promoted by groups like Revolutionary Communist Party, Answer Coalition LaRaza, and the list can go on and on and everyone of these groups want to destroy this country.


Hopefully every Democrat who is encouraging these lawless demonstrations, will be arrested for treason and sedition!


More than half the population of the U.S. supported Clinton


that is not true her total is around 47%

neither candidate got over 50%

the gop did win the house and senate tho

I can't exactly put into words how happy I am for the underhandedness of the DNC and the backstabbing of bernie done by hilary and her traitorous anti-American cohorts.

Their stupidity in dropping bernie for hilary was monumental.

But,shouldn't he be sending the liberal terrorist protestors to go after the dnc or hilary?

No-that would make too much sense.

Without the cowboys parade I fully agree. I feel those at the top of the left don't mind the riots so much as long as it's against Trump. They would let the country burn instead of handing over power if they could. Imo that's why Obama had such a hard time with his words during his meeting with Donald. Although I don't blame him for not being friends with Trump, as president he should be willing to work with his successor, which I feel he is willingly being forced into by the scrutiny of his position and not because he feels it's his duty.
The great orator lost for words.

posted on Nov, 15 2016 @ 10:49 AM
link
As things are progressing I wonder how long till we have a real life purge where a day or week is allowed for everyone to do anything they please. I mean after Baltimore stepped back and allowed riots to the current riots along with Chicago having no problem being a sancuary city no wonder leading to their numbing murder rate, why not go all out and forgo all our laws?

Only 1/5th of the population voted for Hillary.

originally posted by: tribal
a reply to: Kukri

Bernie is a politician, surely one with a good working knowledge of the english language and syntax and the nuances of communication. For him to not specify which protests he is referring to in the current social climate is reckless.

I won't assume to know what his meaning was whether implied or otherwise. I can however presume what he meant by his history and legacy in politics. I have serious doubts he would ever incite or condone any type of violence simply because of his very public and well recorded beliefs.
edit on 11/15/2016 by Kukri because: minor corrections for clarity

Please, there's been riots, civil protest and lawlessness continuously through the Obama years. If the dems at the local levels Especially the mayor's did more to prevent this horsesh#t there would be more order.
If the president did more to show intolerance for these actions would be a good start but why would I think he would take a lead or stance on anything of purpose?

originally posted by: jadedANDcynical
a reply to: Kukri

Well, considering that they only have to meet one of the criteria to qualify, does that mean they're double terrorists?

Bernie, like Hillary and Barrack, have not come out against those causing destruction and mayhem.

Instead he says that they should expect "more street protests." And while there are indeed non-violent protestors, the ones who are causing mischief are not being dealt with or addressed.

As of this moment, there are 65 days 13 hours 45 minutes or so until January 20, 2017 when Donald Trump is issued the oath of office of president of the United States of America.

The only ones I see being divisive are those who oppose him.

I beg to differ! The preceding snippet would make it quite apparent that you need all three to be considered domestic terrorism.

I figured you'd demonstrate your lack of understanding and live down to that expectation.

Let me break that down for you:

and
Occur primarily within the territorial jurisdiction of the U.S.

I can see how someone with a lack of understanding would be confused, so you're welcome.

See the key word, "or," in the second characteristic, that is what tells you that only one of the three sub-characteristics need be met for condition [2]
edit on 15-11-2016 by jadedANDcynical because: more

This is why the electoral college exists.

originally posted by: jadedANDcynical
a reply to: Kukri

I figured you'd demonstrate your lack of understanding and live down to that expectation.

Let me break that down for you:

and
Occur primarily within the territorial jurisdiction of the U.S.

I can see how someone with a lack of understanding would be confused, so you're welcome.

See the key word, "or," in the second characteristic, that is what tells you that only one of the three sub-characteristics need be met for condition [2]

Just a second but did you add an or? site won't load for me so I need to locate another source.

ETA:
Wow had to go back to the original comment but I see your math is as horrid as your reading comprehension. And you dare to criticize me! it requires all three conditions to be considered terrorism I should of stuck with my original far less polite reply.

originally posted by: Kuroodo
About 52% of Americans did NOT vote for Hillary.

This is why the electoral college exists.

Incorrect! About 75% of eligible voters didn't vote for Hillary Clinton. Just as the same for Trump. So no, by definition neither party got a clear popular mandate.

Regardless, the same point is being made!