Who benefits from civil unrest?

posted on Nov, 14 2016 @ 05:45 PM
link
If you were someone like George soros, Obama or Hillary how could a bunch of idiots rioting or causing civil unrest benefit you? Make it terrible for trump? Financial crisis? martial law or something? Why aren't they denouncing the riots?

My question is who benefits and how? I know there's a way for money to be made in this or an ulterior motive, just can't quite put my finger on it.
edit on 14-11-2016 by omniEther because: (no reason given)

It's all about making America look good to the rest of the world.

The media benefits. Some are owning their misguided ways and doing something to change. Others are holding fast to the narrative and saying "SEE! This is what you get!"

The protesters are unwittingly marching right into bigger more authoritarian police states with their protests/riots. When it gets bad and the NG is called they'll wonder how it all happened and blame Trump more.

Why let a bunch of people choose their president? Why not create a situation where the people were/are fed up and DEMAND that they change the laws. The people demand it so it has t be right, right? So what happens each time the voting laws are changed? Why not the constitution? Then they can throw their hands up and say, "Hey, America wanted this!" and their hands are kinda kept clean.

A quick, and legal way, to get the masses to demand changes to the constitution. Very cynical method but then stack the cards in favor for the future. In the end, Americans give away their freedom to pass a law to make them feel good. Until it comes back later to haunt them then an act of the Stay Puff Marshmallow Man himself is needed to change that change.

I wonder what the "suggested" changes will look like? Maybe remove the "two terms only" for the president? Maybe "hey the popular vote has to count for some electoral college votes" type thing? Any other guesses?

This video will help explain everything you've ever wondered about Soros. It really deserves it's own thread and separate discussion. When you invest billions into a solution to a problem that you create, the only hurdle to get past is the reaction.

posted on Nov, 14 2016 @ 07:11 PM
link
A year ago this website would have said that ANYTIME the government has you looking this way something is happening in that direction. Now we all just stand in here and fight and no one turns around to see what's really going on.

The government. That way they can use that for an excuse to crack down on more freedoms.


" As a Human Being , I am Concerned about the Society In Which I Live . "


This is a Highly Suspect Statement . If he Really was that Concerned , he would be Helping People Around the World make a Better Life for themselves by Philanthropy in a Positive way Instead of Fomenting Dissent in Every Country he tries to Manipulate . A Godless Evil Man by his Own Admission .
edit on 14-11-2016 by Zanti Misfit because: (no reason given)


" As a Human Being , I am Concerned about the Society In Which I Live .


This is Highly Suspect Statement

" As a Human Being , I am Concerned about the Society In Which I Live . "

"I am basically there to make money. I cannot and do not look at the social consequences of what I do." 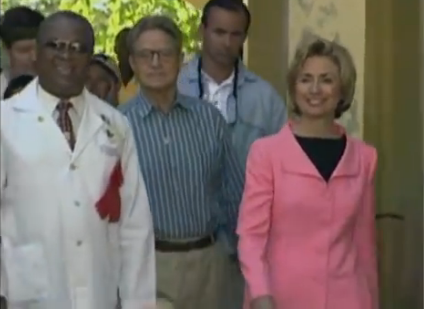 The future of Haiti has been bought by foreign interests and is being procedurally manipulated to make Soros and Hillary a tidy profit (with a side of pizza). Didn't you get the memo? Third world countries are HOT investments if you are a billionaire philanthropist agitator. F**king scumbag.

posted on Nov, 14 2016 @ 08:15 PM
link
We can only imagine the outrage if Clinton had won and Trump supporters took to the street threatening another civil war.
The establishment media coverage would be wall-to-wall.
President Obama would be denouncing the candidate and his supporters.
Clinton herself would claim she was right about Trump voters being "deplorable"

posted on Nov, 15 2016 @ 02:06 AM
link
This has been set up for a while as the cards were worked into place. I think the plans of unrest run much deeper than the left / right divide, and that divide is merely being used as a means to an end. Just a hunch.