posted on Nov, 14 2016 @ 12:51 PM
link
Thought this may be of Interest to some ? It just highlights what can happen if Nuclear facilities are not looked after with care and The magnificent Universe forbid an earthquake , Extreme weather event or a Terrorist hit with over 450 nuclear reactors in operation and 60 in the pipeline. 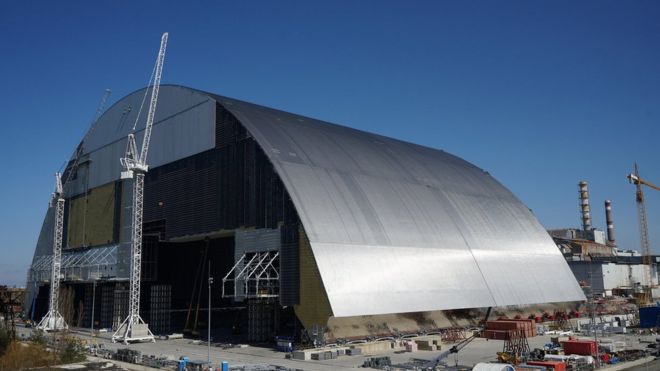 Work has begun at Chernobyl in Ukraine to move a giant shield over the site of the world's worst nuclear accident. The concrete and steel arch will eventually cover the remains of the reactor which lost its roof in a catastrophic explosion in 1986. The blast sent a plume of radioactive material into the air, triggering a public health emergency across Europe. The shield is designed to prevent further radioactive material leaking out over the next century. It measures 275m (900ft) wide and 108m (354ft) tall and has cost $1.6bn (£1.3bn) to construct. The European Bank for Reconstruction and Development (EBRD), which is leading the project, describes the arch as the largest moveable land-based structure ever built.

It's about bloody time this situation was at least capped in a long lasting fashion. I had hoped that by now, there would be a concerted effort to apply all existing world resources of science and technology, to the problem of actually neutralising the radiation and the fallout covered area surrounding it. But as per usual the worst of us (governments) have prevented the rest coming together to make significant headway, such that this structure, which at best is a temporary measure to replace a temporary measure, is the best we have to offer at present.

As usual, Fukushima did not happen...at least to MSM "all the news that's print to fit" types.

What? Look, it took thirty years to get to this stage with this incidents clean up procedure. Everything in its proper order. I do not like it at all, but the reality is that with things being what they are, the best we can do is hope that Fukushima is dealt with a little faster than this incident was, and that the solutions we apply to it are better than those applied to this.

But it's not going to happen over night or even over a decade. The Fukushima event is going to be the work of decades to correct as well. It's not been long enough for the site to be "cool" enough to even install a sarcophagus yet. This crap takes time, lots of it. Unless the world comes together to create scientific unions, stateless groups with huge resources and manpower the equal of entire nations to solve these issues, they will not be dealt with at the pace we would like, something we must accept as rapidly as possible, or face stomachs ulcerated through stress.

posted on Nov, 14 2016 @ 01:54 PM
link
Should've invested all their money into fusion reactors and other green energy reactors. A lot safer and no worries of a nuclear melt down that will wipe out 4 whole cities in a blink of an eye.

Nuclear Reactors are a prehistoric energy invention. So many other inventions such as Fusion Reactors and Gigafactory Buildings.

The nuclear age needs to go.


I hope this serves as a good reminder of what a failed and dangerous innovation looks like.

posted on Nov, 14 2016 @ 02:04 PM
link
The Channel 4 ( UK ) You tube video done before the one above is of interest also and deals with Sellafield Europe's most radioactively contaminated site. £54 Billion decommissioning costs, not a wonder our energy costs are so high.


Sellafield, the nuclear fuel reprocessing plant, reveals major development in a scheme to clear up radioactive waste at the controversial site in Cumbria.

posted on Nov, 14 2016 @ 02:13 PM
link
a reply to: skywatcher44
Wishes the planet the best with this mess also.
It may help to install some digital building mechanism to add some radioactive neutralizing agent inside as its sealed.
It would be great if somehow beneath the structure they built a containment enclosure that the structure could eventually sink into. As its poison is still leaking beneath
I cannot believe there are money issues with this

Glad to see they're finally getting it in place , it's taken long enough.

posted on Nov, 14 2016 @ 02:34 PM
link
It took them long enough. I suppose Japan is taking long enough to fix things too. Wouldn't you think that fixing these things right quickly would be a legitimate concern?

originally posted by: Lazarus Short
"...a giant shield over the site of the world's worst nuclear accident."

As usual, Fukushima did not happen...at least to MSM "all the news that's print to fit" types.

Fukushima is at minimum 10x worse than Chernobyl. But probably more like 100x worse.
It's hard to tell when there's a huge information blackout and what info we do have is inundated with lies and propaganda trying to hide the truth.

originally posted by: rickymouse
It took them long enough. I suppose Japan is taking long enough to fix things too. Wouldn't you think that fixing these things right quickly would be a legitimate concern?

There is no way to "fix" these things (nuclear meltdowns) with current technology.

At best we can mitigate the damages by something like 5 or 10%. But it's completely out of our control.

We need to develop new technologies to contain, to clean up, to more accurately detect and track, etc. We simply don't have the capacity to handle even one meltdown right now, even if we devoted way more resources to the situation.

Heh... My attitude to most things, is that there are two ways to do them. Quickly, and properly.

With Fukushima, you have a series of buildings which are structurally compromised, meaning an unsafe working environment from a structural point of view, you have the risk of water coming into and reacting with the contents of the buildings, you have the fact that the area is so hot that people working on the site even now, are literally shortening their own lives to get things done at all on the site...

Basically, acting too quickly right now could result in structural collapse of the buildings, which could lead to further volatile reactions, or it could damage the mechanism by which sea water is being kept at bay currently (and less effectively that is ideal) which could have even more disasterous consequences, and if they simply throw wave after wave of human resources at it, without regard to safety, they will be signing death warrants on every brave soul who gets involved.

They cannot even get gear down to where the nuclear fuel is, to see what state and situation it is in directly at the moment as far as I know, it's so hot down there. It's a tricky problem, and the solution that works for one building might not work for all of them. It's risky to leap before they look, and as frustrating as it is, this is the price of nuclear fuel. I for one would rather we went about in the dark, than take that risk ever again.

posted on Nov, 14 2016 @ 06:47 PM
link
Fukushima is much worse. I'm really getting sick of the gov and corporate types refusing to face this fact.

They could have hauled out the spent rods and some of the spares right away in Japan, but because they made the system they were using illegal and they had not developed a new system that met the standards, they were forced by law to leave the rods there. The old system was still in place but they could not use it. In that emergency they should have made an exception to relocate the rods. If it had happened a year before they could have transferred them to a stable place safely, but because the people who made the rules wouldn't budge, they endangered the citizens way more than they should have.

I read an article explaining the problem. They should have never banned the system if they hadn't developed a new one. No common sense exists in the places that make the rules anymore.

posted on Nov, 14 2016 @ 11:12 PM
link
wow its finally ready..
I was there in 2011 and it was half way complete... it was huge and workers walking in and out was quite a surprise for us considering they wore no protective gear and worked daily only 100m from the reactor.

for those interested, BioNerd on youtube has some amazing video's of her trips there'.
She's brilliant when it comes to radiation and nuclear materials...

They did that originally , they built a concrete sarcophagus to entomb the danger area but over the years water has leaked in and undermined the structure leading to the threat of collapse which could be lead to an event worse than the original disaster.

Hopefully this metal structure will contain the threat and make the plant safe.

you rock - that was awesome
thanks