MASSIVE Protests Being Planned For The Inauguration of Donald J. Trump on 1.20.2017

posted on Nov, 13 2016 @ 01:03 AM
link
As the relatively small Anti-Trump protests in U.S. cities start to wind down, group leaders are planning Huge protests in Washington D.C. on Friday, January 20, 2017..the day that Donald J. Trump will be inaugurated as President of the United States of America.

""One protest is being organized by the group ANSWER, which stands for Act Now to Stop War & End Racism.
The group’s Facebook page announcing its “Protest at the Inauguration: Stand Against Trump, War, Racism and Inequality" event on Saturday showed that nearly 7,000 people have already committed to attending and 24,000 more have expressing interest in the event.""


The Washington D.C. police department is preparing for at least 30,000 protesters, but the actual number will likely be much larger, with plenty of violent thugs and agitators mixed in, courtesy of Billionaire trouble-maker, George Soros.

Anyone want to wager what percentage of MSM coverage on that day will focus on the transition of power from Obama to Trump, vs. the protests? Maybe 100,000 of us "deplorable" Trump supporters should show up, to help keep the protesters in line.

-CareWeMust!
edit on 11/13/2016 by carewemust because: Donald Trump will Be an Amazingly Effective President!

originally posted by: carewemust
Maybe a 100,000 of us "deplorable" Trump supporters should show up, to help keep the protesters in line.

Absolutely not, This is exactly what Soros wants.


originally posted by: carewemust
Maybe a 100,000 of us "deplorable" Trump supporters should show up, to help keep the protesters in line.

Absolutely not, This is exactly what Soros wants.

I hope President Trump is strong enough to have SOROS brought to trial. Someone that evil has to have broken several laws, but no-one has had to balls to bring him to justice.
edit on 11/13/2016 by carewemust because: (no reason given)

Other than starting a ruckus you have to wonder what they think they can accomplish ? Trump won the election so they might as well get over it..... their pathetic misguided attempts at destroying the results of the election is about as effective as pissing into the wind.. Only in their case many will get arrested if they start their normal progressive violence when things are not the way their emotions dictate they should be..... instead of a face full of piss which IMO they deserve..
youtu.be...

Moore claims Trump will impeach himself through breaking laws regarding national security and his personal financial gain.

All I see are shady, Koch Brother or Russian sponsored sources, or personal opinions based on ... nothing.

originally posted by: IgnoranceIsntBlisss
Michael Moore is in on it:
Michael Moore’s To-Do List: Take Over, Occupy, Impeach Trump

This guy has really fallen from grace.

From an opponent of the established order to one of its most vocal supporters.

Sold out to the highest bidder. A shameful excuse of a socialist.

He only uses non-Union labour on his film projects too. Way to take a stand for the working man, Michael.

He makes me sick.

I wonder if he'll have any future films coming out that are funded by Soros?

And to hell with these protests. What are they even protesting? Do they even know themselves? I think not.

Moore claims Trump will impeach himself through breaking laws regarding national security and his personal financial gain.

I wouldn't discount that as a possibility. His business ties might compromise national security...

He claims he'll put his business assets into a blind trust, but I still think many in the defense sector view him as a high security risk.

It will be interesting to see what occurs the moment after President Obama signs over the Presidency to Donald Trump and heads for his new home.

All the police and law enforcement authorities might run to their trunk, put on their RAMBO gear, and get to work restoring peace and law-n-order to the nation's capital!

originally posted by: IgnoranceIsntBlisss
Michael Moore is in on it:
Michael Moore’s To-Do List: Take Over, Occupy, Impeach Trump

That guy needs to be tossed into a 4x4 cell he's an idiot. The rest of the people protesting are as well, they have no clue just how brainwashed they've become under the Obama government these past 8 yrs.

I love how the "new" thing is to call something "establishment" if it doesn't agree with one's beliefs.

Honestly, What if this escalates even more? North and South , again, a great rift between them. Those that want Hillary and those that want Trump, and all of this escalating so much to homegrown terrorists who want to ruin Trump?

originally posted by: Kettu
I still can't find actual, definitive proof Soros has any real ties to any of this.

posted on Nov, 13 2016 @ 01:24 AM
link
There is a saying that Obama may be the last president (Maybe last black one) and we have time untill January 20, 2017 to see what will happen. Officially Trump will be a president then.

If Michael Moore was anything he claims to be, which he isn't, he would not, under any circumstances, have supported Hillary Clinton.


originally posted by: Kettu
I still can't find actual, definitive proof Soros has any real ties to any of this.


Not seeing it. That's not proof. Sorry.

Opinions aren't facts. And biased sources aren't reliable.
edit on 13-11-2016 by Kettu because: (no reason given)

More from that guy.
abcnews.go.com...

I was thinking about taking my special lady down to DC to get caught up on exhibits at the Smithsonian over the MLK weekend just before inauguration since we'll both be sans kids.
Was going to be a great long weekend of museums and people watching.
Oh well 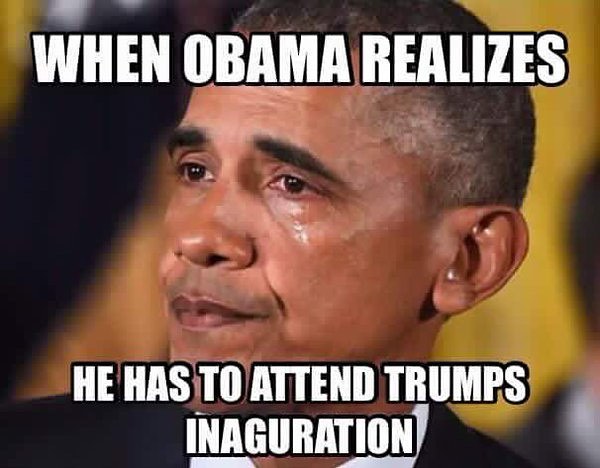