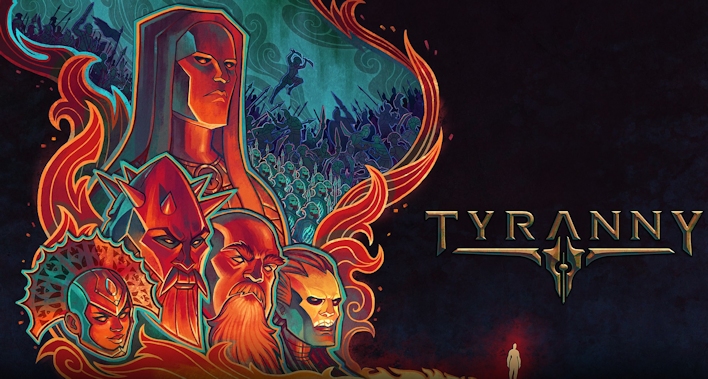 In Tyranny, the grand war between good and evil is over – and the forces of evil, led by Kyros the Overlord, have won. The Overlord’s merciless armies dominate the face of the world, and its denizens must find their new roles within the war-torn realm... even as discord begins to rumble among the ranks of Kyros’ most powerful Archons.

Players will experience the new world order under the Overlord in a reactive role-playing game (RPG), interacting with the populace as a powerful Fatebinder in the Overlord’s forces -- roaming the lands to inspire loyalty or fear as they bring control to the last holdouts of the Tiers.

So I’ve been playing this on and off since I bought it yesterday, the game having been released a couple of days ago! I’m rather enjoying it so far, and was wondering if anyone else was playing too? Not that it’s multiplayer, but you know, just curious!

A lot of the reviews I’ve been seeing on Steam and the like are saying that it’s very Pillars, but -better-. I haven’t really played enough yet to agree or disagree with the people who are saying that, but I have definitely enjoyed my time in the game so far. 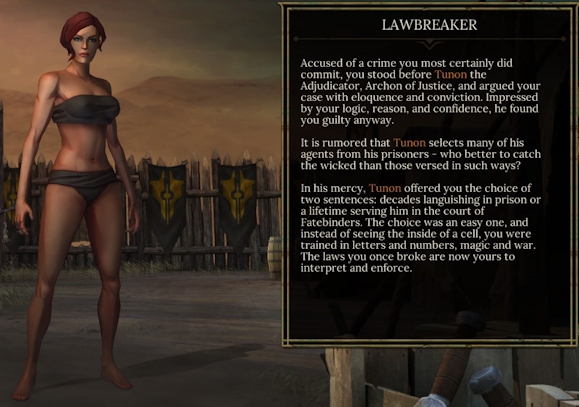 I rather liked the description of the Lawbreaker history! Naturally, that’s the one I chose.

My character is doing everything possible to strike fear into everyone’s hearts. There is no room for friendship under the reign of my Fatebinder. Not that it’s -her- reign, she’s just a glorified peon, but, you never know what twists and turns these games will throw at you later on!

One of the choices my little lady had to make. Obviously I chose the first one.

At any rate! I’m enjoying this game so far, and am looking forward to playing some more when time makes itself available to me.

Some people here know that I’m trying to write an epic fantasy novel that’s more dark and bloody than typical elves and hobbits, and I must say that what I’ve seen in this game so far has inspired me a little bit! More evil!!

Definitely recommend to those who like cRPGs, and are interested in playing under a more “evil” guise. I LOVE that I’m not a “hero”. I’m just a peon bound to my evil Overlord’s will and ALL will be conquered before me in the name of my Overlord!

It popped up my steam but hadn't heard much about it. Just got my Zotak 1060 amped today and loving 7 Days 2 Die and Empyrion on it.


Guess I will add it to my wishlist?


Guess I will add it to my wishlist?


Yes!
I was originally going to wait for a sale, but then I decided - eh! Early Christmas present for meee!

But ooooh, I haven't touched 7 Days 2 Die in ages. It's been about 8 or so months now since I last played. Should probably see how that's coming along at some point too!


Alpha 15 is AWESOME! I really see the Fun Pimps working hard to make the game better!

I have not played Tyranny yet, but I plan on getting it eventually. I just recently beat Pillars of Eternity and enjoyed it. So if its more of the same, I'm in.

Oh, yes! The game uses the same engine as Pillars of Eternity, and the playstyle is much the same though there is a slight deviation from the leveling up system that was used in Pillars - more of a talent tree type thing going on. Lots to read and explore, lore to discover, people to meet and travel with, decisions are yours and are reflected back during the story, et cetera!

If you enjoyed Pillars of Eternity, and like the idea of playing on the side of Evil instead of being a part of the typical good guy story - definitely. In saying "the side of Evil" though; the choice remains up to you whether or not to act the evil asset of the Overlord, or perform more benevolently.


Dang Kaelci, didn't know you are a gamer.

Well, I do have a couple of threads in here, and I've responded to quite a few video game related topics both here and in general chat and in a couple of rants, but, yep! Haha.


Nice... I'm silly I'm looking forward to the new Zelda game and the Kingdom Hearts 2.8 and 3. My main thing is JRPGS and fighting games.

With JRPGs - I've really only played a few of the Final Fantasies, the first Kingdom Hearts and KH 358/2... I think.. apparently Dragon's Dogma is a JRPG... I don't know. And Soul Calibur 2 and 3 are my fighting games of choice.

I used to spend a lot of time in various MMOs, but not so much these days. Kickstarted an interesting MMO a few months ago called Chronicles of Elyria. Looks like it could be really interesting if they manage to succeed! ... But nowadays I'm mainly in random Western RPGs. Or Stardew Valley. Excellent little Harvest Moon clone!


Are you any good at Soul Calibur 2? Talim is my character on there. Also I think Final Fantasy has strated too far from their roots. 8,9, and 10 are my favorites, but I found 8 to be especially charming.

Eeee! Yes! Talim is my character of choice!
Buttttttttttt, I wouldn't really consider myself good at it; I have a method and I stick to it. Grab, throw, victory. Hah!

And Final Fantasy X for meeee, though, it was the first Final Fantasy I ever played so I'm a bit biased towards it, it holds a special place as my favourite.
Wrote a thread about FFX a few months ago!
(hehe)


Haha nice! Yep.. shes so fast, shes practically broken (that's a term they use when a character is logistically better than all the others), so that could be a fun game. Shes the fastest character in that game. I use Taki for SC 3.


X is awesome. I never did get the alternate ending, though. I love the battle system.