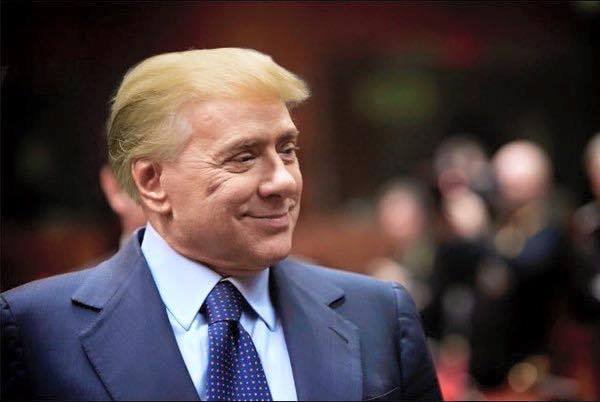 For once I agree with Berlusconi , the similarities run deeper than their orange faces.


The tax affairs of both men have been subject to scrutiny: Trump says paying none "makes me smart" and refuses to release his returns. Berlusconi was found guilty in 2013 of fiscal fraud, a conviction that effectively ended his political career.

Despite their own wealth and extravagant lifestyles, both present themselves as comfortable with and champions of ordinary people, as outsiders untainted by the perceived failures of established elites.

Both are resolutely politically incorrect and have appeared at times to lack a self-restraint switch.
Trump had no problem mocking a disabled reporter. Berlusconi once likened a political rival to a concentration camp guard.

Both are twice-divorced. Berlusconi at age 80 lives with a girlfriend 50 years his junior; Trump, 70, is now married to former model, Melania, 46.
Both have been insulting to Barack Obama: Trump questioned the outgoing president's American-born credentials, Berlusconi has joked about him having "a good tan".


Separated at birth , the future could be written in the past.

I hope that Trump is smarter than Berlusconi.

Otherwise the US is in trouble.

posted on Nov, 12 2016 @ 12:48 PM
link
Very much so, but I believe Berlusconi to be better with finances while Trump is better in starting businesses.

posted on Nov, 12 2016 @ 12:51 PM
link
Truth to be told, knowing where you stand on foreign policy issues, I am not surprised at all that you support a lying, corrupted, murderous criminal that's Hillary Clinton.

And as for this thread...dunno. Give me a call when Berlusconi does something that matters. Trump had already proven himself to be 10x times better than him. If anything, comparing the scandals, I think Hillary Clinton and Berlusconi have a lot more in common, as they will soon once had shared a prison cell, and they both managed to get away with their crimes
edit on 652k2016Saturdaypm014 by Nikola014 because: (no reason given)


Truth to be told, knowing where you stand on foreign policy issues, I am not surprised at all that you support a lying, corrupted, murderous criminal that's Hillary Clinton.


Then you may be surprised to learn that I don't support Hillary Clinton.

You would be one of those people who don't support Hillary Clinton, but would vote for her in order to stop Trump? I don't buy it

But either way, don't you think that Hillary Clinton and Berlusconi has got a lot more in common than him and Trump? If Trump does what he promised he'd do, and that's to appoint a special prosecutor to look into Hillary Clinton's case, then both Berlusconi and Hillary would be convicted criminals


You would be one of those people who don't support Hillary Clinton, but would vote for her in order to stop Trump? I don't buy it


Faced with the choice I would either vote for a third party or not vote.

Clinton may be distasteful but I think she's less dangerous than a loose cannon like Trump , you'll never know where or when he's going to go off.
A declining US economy is bad for the world not just the US, just because Trump is a businessman doesn't mean he can run a country.

Everything that we've seen from Hilary Clinton show that she's a lunatic who's incapable of handling a bloody emails, let alone a country that's the USA.

But we will see. Trump has managed to prove everyone wrong, time and time again. Let's hope he does the same this time as well

I hope he does but doubt he will.

Clinton may be distasteful but I think she's less dangerous than a loose cannon like Trump , you'll never know where or when he's going to go off.
A declining US economy is bad for the world not just the US, just because Trump is a businessman doesn't mean he can run a country.

Clinton knows how things are done.

Yeah, yeah - - I know - - the opposition thinks we need to shake things up and break the system.

I survived 2 corporate take overs. Both came in with "We're gonna change everything" - - yada, yada.

BOTH - - within a year went right back to how things were before they came.

Systems fall into place because they work. "Trim the fat" - - sure. But, take down the system? Not gonna happen.

originally posted by: Nikola014
Trump has managed to prove everyone wrong, time and time again.

What exactly has Trump proven everyone wrong about?

That he's a performer, caters to his audience, who are clueless to who/what he really is?

He hasn't done anything yet.

If I were Trump id take this as a profound insult.

posted on Apr, 1 2017 @ 11:44 AM
link
Berlusconi is a total fraud and if he's allowed to take again power in regions or provinces in Italy it would only lead to further confrontational stance and would only contribute to the ferocity of the upcoming civil war in the EU.

posted on Jun, 5 2017 @ 04:12 AM
link
The only difference is that while Trump lowers taxes, Berlusconi never actually did. Every small cut in taxes was compensated either by another tax or by other commodities' price manipulations orchestrated by the Italian government.
The most common of all, has always been fuel price manipulation for Diesel and Gasoline at the pump.
Until one day in 2012 they realized they had such high gas price that they were killing their own tourism market. Oligarchs manipulators dropped those prices within a couple of days of a very significant amount.

posted on Nov, 8 2017 @ 09:53 PM
link
Yep, just like Trump, Berlusconi had a massive victory in Sicilian local election by achieving the IMPRESSIVE 38%.

posted on Nov, 19 2017 @ 09:08 AM
link
Latest Berlusconi's claims of his program to favor improving the pension system, is the most disgraceful # show that the Italian media could ever propose. This guy together with help from Romano Prodi and in a sinister tandem have disgragated in turn every foundation of the italian economic system and Italian society, starting from 1994 and continuing now.

Exactly, we'd be much better off with Hillary as President IMO, but a huge chunk of America is so brainwashed they are incapable of logical analysis.

Why are you trying to make this about Hillary Clinton? She lost. Deal with it. America is going down the tubes because we have an idiot in the White House and the GOP cannot bring itself to fix things. Meanwhile, America's enemies are toasting their good fortune.

Did you just reply to a year old post of mine?