Will USA vice president-elect bring 'controversy about evolution' into schools in USA??

I actually in America the education system sucks since the 70s when it was taken over by the religious right.


That is exactly what worries me - if any shred of evidence links Trump to Jeffrey Epstein's Island - he will be impeached, and imho looking at the record, his VP is worst of the two?! (It just sounds unbelievable, but true )

originally posted by: DJW001
Could you interpret those weird ritualistic signs he makes with his tiny little hands when he speaks?


Do you have some pictures or URLs.

If he does this one, then he acknowledges that he is a SLAVE (alpha alter) for Lucifer. That is the only one to look out for. Bushes, Pope, Clintons all did it for Lucy's NWO. 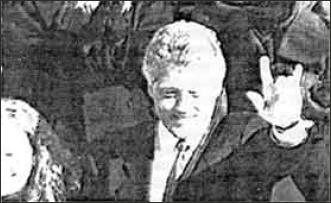 
originally posted by: DJW001
Could you interpret those weird ritualistic signs he makes with his tiny little hands when he speaks?


Do you have some pictures or URLs.

If he does this one, then he acknowledges that he is a SLAVE (alpha alter) for Lucifer. That is the only one to look out for. Bushes, Pope, Clintons all did it for Lucy's NWO. 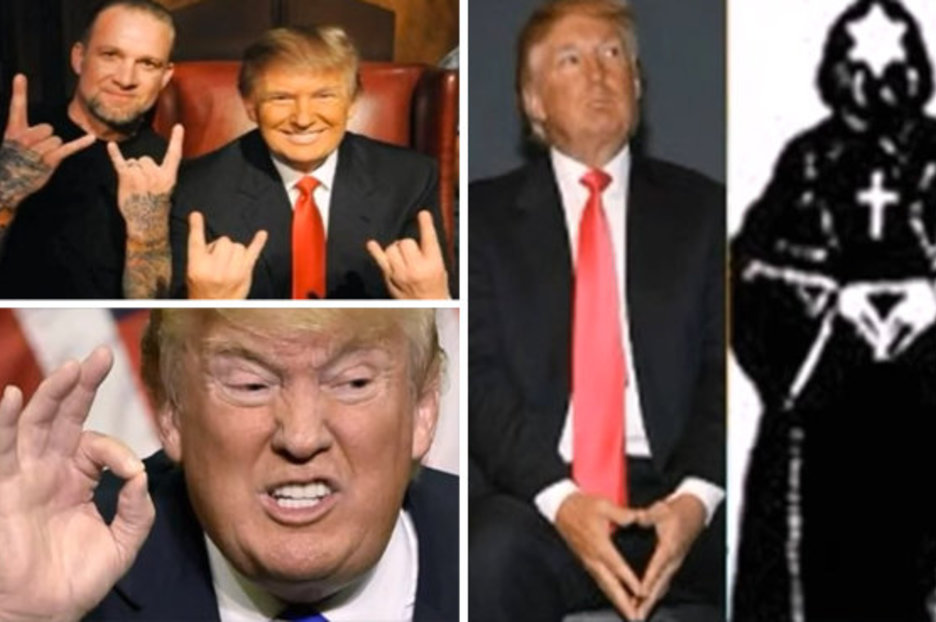 Plus grabbing someone by their p***y is an ancient Illuminati secret handshake.

He has done the horn, the divers OK is 666 and the inverted triangle means that he is of the 'below triangle' as in the 'As Above, So Below' 2 triangles making the Star of David.

Either way, the peasants are screwed.

originally posted by: Rapha
Just wait for when Trump states to the world that he is Christ, 1260 days after his Inauguration Day.

That day is going to be so much fun watching all non-Christians.


Yes, it will be fun watching all the non Christians laugh their asses off.
edit on 11 14 16 by Barcs because: (no reason given)


Agreed, that's what scares me the most. If something happens to Trump, we will be stuck with a president that will cater exclusively to religion and try to force his views into education, despite how unscientific they are, or how little merit those bs arguments against evolution actually have.
edit on 11 14 16 by Barcs because: (no reason given)

originally posted by: Rapha
Just wait for when Trump states to the world that he is Christ, 1260 days after his Inauguration Day.

That day is going to be so much fun watching all non-Christians.


If you are insinuating that Trump is the recoming of Christ with this post then I REALLY feel sorry for how low your religion has sunk...

You are worried about evolutionary study? Evolution education can take a hit. It's been around long enough that Christians can't legislate it into obscurity. Climate Change on the other hand I am truly weeping for the future of that science right now...
edit on 14-11-2016 by Krazysh0t because: (no reason given)

It's sad liberals try to label and judge people on what they believe.

What's next, he likes pineapple on his pizza? #omgimpeachhim

posted on Nov, 14 2016 @ 02:59 PM
link
Pence was clearly some kind of deal forced on Trump, probably by the Bush people. He was unpopular outside of his own state, and had limited appeal that would hurt Trump overall like they wanted, while being a party loyalist.

Trump himself was said to be leaning towards Peter Thiel which sounds believable to me as a typically brilliant and unconventional Trump move, as the timing would have been perfect as it would have helped him pick up some of the disgruntled Bernie Sanders supporters who had just had the nomination stolen from their candidate.

Fortunately, Hillary screwed up more by making an even worse strategic pick with Tim Kaine, and vice president doesn't much matter overall; it's "not worth a warm bucket of spit" as the Washington saying goes. I would guess that Pence will fade from the public consciousness once the administration gets going.

Overall though, what is worrisome is that the remaining Neocons and perhaps the Deep State in general seem to be thinking about heading down the path of trying to punish America for voting Trump in, by forcing his presidency to be the boogeyman that the mass media pretended he was, as if to retroactively make them correct after all. One thing's for sure; that's not Trump, and that's not the Trump I voted for.

LMAO. What people believe influences the type of job they do. Ask a Southern Baptist or other evangelical Christian about that one, most will NEVER even consider voting for a non-Christian president, even if he has the best policies ever devised.

Sorry, bud, it has nothing to do with liberals. This is about religion and blindly denying scientific data. That type of mentality is dangerous and counterproductive, especially for somebody that might one day run the most powerful nation in the world and influence others as well as push educational legislation.

Beliefs are very relevant. If the president believed that the moon was made of cheese (just as dumb as denying evolution)and started shutting down cheese companies and funding missions to the moon to gather it, you'd be okay with that? Denial of reality is a mental illness, not a personal preference or opinion. Yes, it worries me that a religious fundamentalist could one day obtain the nuclear launch codes. It should worry you as well, regardless of whether they are conservative or liberal.

I feel that Trump picked Pence to secure the fundamentalist vote, and agree that the republican party kind of forced them to do it. Without them, it would have been very difficult to win, especially with all of Trump's behavior that blatantly conflicts with Christian values.
edit on 11 14 16 by Barcs because: (no reason given)

posted on Nov, 14 2016 @ 04:41 PM
link
The kids should be taught about all aspects of evolution, including the doubts. However, if I'm not mistaken, he funded or was for the funding of conversion camps... that alone is a scary insight into the man's mind. I don't trust him, at all.

originally posted by: Alexander the Greatincluding the doubts

The kids should be taught about all aspects of evolution, including the doubts.

Just so long as they also teach the doubts about religion, right?

Trump has made it clear that he has no plans to decide what is taught in schools.
Quite the opposite.
He wants to get the Federal Government out of deciding what is taught and let the local communities decide that.
No more Federal indoctrination. That's a good thing.

Seriously, people need to stop spreading disinfo and freaking out over nothing.

When was the last time a sitting vice-president was anything other than a place holder?