This is why we need the Electoral College 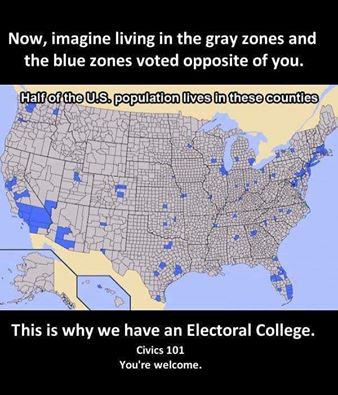 People really need to study the Electoral College and you would understand the need for it. Without it a very few pockets of population would control every vote. Only those in large population areas would have votes that counted. Can you imagine flooding NY and CA and pockets of high populated areas with one prominent demographic? That demographic would rule forever. So changing it is a big biiiiiiiiig slippery slope. And not sure its worth changing for a one term President. I think Trump is a blip on the radar. He was the right personality at the right time. Its all that was. I seriously doubt this means we'll get more Donald Trump-like figures going forward for those of you that think hes not fit.

HOW do people in America not understand this? I read about the electoral college when I was 16 and understood it perfectly. I'm not that smart.......

This confuses the hell out of me, HOW do people not get it?

Its sheep following the flock. The blind leading the blind so to speak. I'm willing to bet that a lot of these people protesting right now have zero clue what they are even protesting. They are just glad to be out and about and spreading violence, defacing property and blocking traffic (ie griefing people who are trying to go about their daily lives and making them late for work and late getting home to loved ones etc)
edit on 11-11-2016 by Bloodydagger because: (no reason given)

posted on Nov, 11 2016 @ 12:11 PM
link
That makes zero sense. What does it matter if there's a lot of land with few people in it compared to metro areas with high population density?

A vote is a vote. The electoral system is a sham.

Are you trying to tell me that metro areas are not equally valid compared to rural?
edit on 11-11-2016 by SignalMal because: (no reason given)

If you haven't noticed, or in case you're not paying attention, high level density areas are usually dominated by Democrats. In Texas for example, Austin, Dallas FW, San Antonio and Houston are heavily populated Democrat areas. So in your case, Democrats votes would reign supreme. That isn't fair either.
edit on 11-11-2016 by Bloodydagger because: (no reason given)

That's absolutely irrelevant. It's as if you want to fight against reality. A vote is a vote.

A vote is a vote if all it is is Democrats voting? How does that make sense?

Please add this video to the op if you can.

It's unbiased and easy to understand.
youtu.be...

I suggest you take 5mins out of your life and watch the video. It explains why a pure democracy doesn't work and why our forefathers created the electoral college.

Not just that, its "winner takes all" which makes even less sense.

For example, nearly half the people in Colorado voted for Trump yet Hillary got all of the electoral votes...

Essentially their votes counted for nothing.

It really looks like they have their stuff together on the news.

Meanwhile, all that grey area is filled with normal, happy, heavily armed people enjoying the fruits of their non-violent revolution.

Cheers comrades, you know who you are.

No. Because an individual should have an equal count regardless of where they choose to live within the country.

People will rationalize the sham however they deem best, but it's entirely illogical.
edit on 11-11-2016 by SignalMal because: (no reason given)

posted on Nov, 11 2016 @ 12:19 PM
link
The Gray areas on that map above are filled in with RED from this recent election. Taking those votes away or making them meaningless sure does make an election feel biased toward the Left.

A vote is a vote if all it is is Democrats voting? How does that make sense?

I have no way of deciphering this. Did you see who voted 2016?

Are you against reality as well?

The hell is wrong with people on this site?

No. Because an individual should have an equal count regardless of where they choose to live within the country.

People will rationalize the sham however they deem best, but it's entirely illogical.

Watch this video I posted earlier in this thread and educate yourself. You're being ridiculous. You basically want a democratic dictatorship with revolving heads. Last thing I need is someone from the city telling me how to live in the rural area of the country. That's not going to work.

Then I suggest you read my OP and correlate it with the reply you just quoted.

Oh trust me I read that junk OP. It's so convoluted and full of holes.

A vote is a vote. Your judgment is clouded by your biases, and you're not even aware of it.
edit on 11-11-2016 by SignalMal because: (no reason given)

Nothing is wrong. Many of us have been around long enough to get screwed by the ec. It is part of life. It happens. People dealt with it and moved on with a "better luck next time" attitude.

What you are seeing is the "time out" generation of ungrateful sh!ts throwing a tantrum.

These people are not mentally mature enough to participate. If we want to fix it, we should raise the voting age to 25. Young people obviously can't handle the responsibility.

Enlisted people would be the exception. Service earns an early vote.
edit on 11-11-2016 by Bobaganoosh because: (no reason given)

Again, what you're saying here about "vote is a vote" pertaining to this thread and what I am saying here, is strictly a Democratic vote. The areas in blue on that map show the areas of the USA in which are dominated by the Democratic platform. So you're saying those areas votes should be the only ones counted? What are you smoking?

Anyway, yes, a vote is a vote. The people have spoken. Trump won the election. Deal with it.

In the end, you truly have no clue what the EC is all about and what its for.
edit on 11-11-2016 by Bloodydagger because: (no reason given)

Watch this video I posted earlier in this thread and educate yourself. You're being ridiculous. You basically want a democratic dictatorship with revolving heads.

My god, man. You really are this ignorant. People choose to live where they want, and they choose what party to affiliate with (or not at all).

Last thing I need is someone from the city telling me how to live in the rural area of the country. That's not going to work.

Well I got news for you. Demographics will continue to shift from rural to urban, and if in the US more cities lean left than right, then that is reality and not something to start a civil war over.

Yeah... it's a scam - but it got him the money and power he was after so suddenly it's not rigged anymore.

You'd think the next thing out of his mouth wouldn't be his concerns about global warming threatening his golf course/resort investments in Ireland since he told his base what they wanted to hear about it being a hoax - but hey... we're dealing with Trump here. He know's his base better than they know themselves.