These temper tantrums from these radical anarchists must be quelled. There is no legitimate reason to protest the will of the people.
- twitter.com...


The "will" of the people? Maybe someone should tell this guy that as it currently stands, Trump has lost the popular vote.

So if anything, the "will of the people" is being ignored.

This is the SAME guy who was calling for violence last month:

It's incredible that our institutions of gov, WH, Congress, DOJ, and big media are corrupt & all we do is bitch. Pitchforks and torches time.
twitter.com... 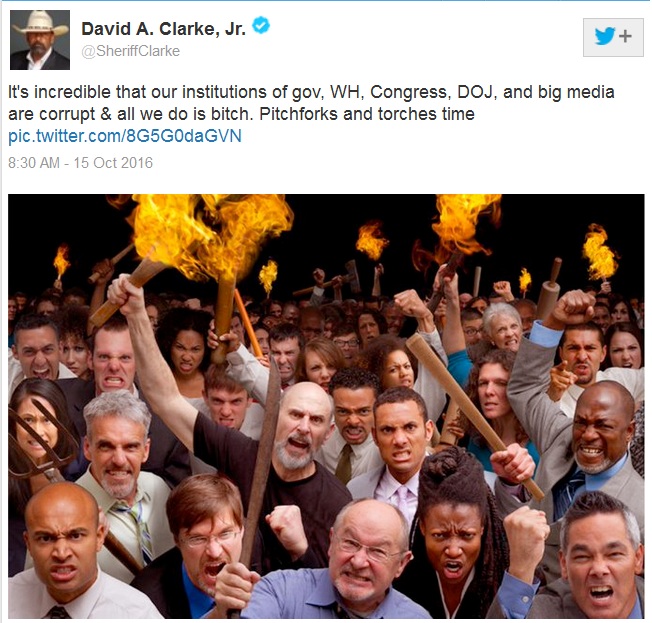 I mean WTF is going on here.

And THIS is the guy that Trump is considering for the head of Homeland Security?

Theres Trump who called for a "revolution", that the people should "march on Washington", that "the electoral college is a sham and travesty" and that we should "fight like hell" when he thought Romney had won the popular vote.

In 2012 Trump called for a revolution saying "The electoral college is a disaster for a democracy".

Is this the type of insanity that we can expect over the next 4 years?

So you agree with the people currently smashing up the streets and ruining businesses?

This is such a typical 'left' response now. Any time anything goes wrong they just break everything in a hissy fit whilst screaming how oppressed they are. They DO deserve to be locked up, if not to save them from their own stupidity.

I used to tolerate these lefties, but honestly, they're just awful now. Fuelled by 8 years of ZERO criticism. They're emotional, irrational, illogical head cases who need time to cool off.

I'm British and even I understand the electoral college. Those how don't shouldn't even be allowed to vote on the grounds of sheer stupidity. Unless they want america to be a 3 state country.
edit on 11/10/2012 by Joneselius because: (no reason given)


So when people beat the hell out of other people and destroy other peoples property we should give them trophies???

Sorry, but when you assault people and destroy other peoples property, that is exactly what law enforcement should do! Arrest your ass and while you are sitting behind bars think about how your rights do not give you permission to harm other people and property that doesn't belong to you!


Or our you tripped up in the media propaganda telling you these are peaceful protest and not what they actually are? Riots!

posted on Nov, 11 2016 @ 11:52 AM
link
I believe the current administration, including the FBI, are allowing the steam to vent for a while. People are calling for Trump's assassination, Trump supporters are being beat up, property is being vandalized, and all kinds of violence perpetrated because Hillary didn't win the presidency.

Her popular vote elevation is razor-thin and comes mainly from that bastion of liberal craziness found in CA and NY.

After the steam has vented, Law and Order needs to be restored and we need to set about doing the work of the American people.

Um, I hope not? But to really answer your question, this is just the beginning. A house divided cannot stand and there are plenty of "people" who are banking on that.

Are you saying "radical anarchists" shouldn't be quelled?

Protest all you want, I have no problem with that. Rioting is where the problem starts.

posted on Nov, 11 2016 @ 11:53 AM
link
VIOLENT protesters ought to be put down in any civilised society. Otherwise, life cannot operate.
And these people obsessed with "popular vote" need to understand that American electoral law makes the popular vote irrelevant. That is not how elections work. The popular vote is an interesting statistic which does not affect the electoral decision.

People rioting because they didn't get their way should be allowed to continue to riot? Until what point? However long they feel like it? A week? A month?

If we need to start doing the work of the American People....then arm yourself and lets water the Tree of Liberty before it withers away.....
Trumps just the OTHER SIDE OF THE HILLARY COIN......

You should know by now how the double standards work. There are even quite a few pre-election posts here where Trump supporters were talking about a revolution if Hillary won.

But yeah, it'll probably take a few weeks for things to calm down. So it seems like everyone is venting or taunting in some way or another (for now).

stuff a sock in it snowflake. Get a job, accept reality, move the # on.

Jesus, is this seriously how you want to act for the next 4 years? Go nuts. You idiots aren't smart enough to realize you are burning down YOUR cities. Most Trump supporters live in the outskirts. We are here, quietly working, living, and cleaning our weapons.

Trump called for this type of response in 2012 (please see my sources above).

And so did the Sheriff just a month ago...

I agree with this sentiment. I cant condone violence either.

What I take issue with is the fact that both Trump and his potential head of Homeland Security essentially called for these types of protests when it suited them.

If Trump had won the popular vote and still "lost" the election, there would be hell to pay.

And IMHO Trump himself would be leading the hell raising.

posted on Nov, 11 2016 @ 11:58 AM
link
Im not American but even I would like to see these butthurt brainwashed fools of the looney left water cannoned and tear gassed- just get over it losers.

Last I checked nothing right now... so how exactly does this outspoken law and order guy, making a statement I would expect = a police state?

I don't know what exactly has happened but we have spiraled down Alice's rabbit hole.


So Clinton LOST! And you think it's OK to attack people and burn cities?

If I interview and don't get a job I don't burn the business and attack their current employees!

If my lotto ticket doesn't win, I don't burn down the gas station that sold me the losing ticket!

I get it....your mad. But you're taking it out on the wrong people! Go after the DNC! They screwed you and played you a fool!

posted on Nov, 11 2016 @ 12:01 PM
link
If it was Trump supporters doing the same thing, it would be a case of good job Trump wasn't elected, if this behaviour is anything to go by,

Let's face it, the majority, not all, but the majority of those protesting are Millenials. They are tasting their first defeat in an Election and now they complain about the result.

If they were living in Syria, Libya or Palestine, I would appreciate their situation, but just because an election result doesn't go your way, it is no excuse for behaving in this way.

They are behaving in a similar way the Remoaners have behaved post referendum, albeit in a much more violent manner.
edit on 11/11/16 by Cobaltic1978 because: (no reason given)

originally posted by: network dude
a reply to: enlightenedservant


What does that have to do with my post? Or are you denying that there were people here calling for a revolution in Hillary won?

I'm sorry to say but he's right in some aspects.
People should be receiving death threats for expressing their views.
For having voted Trump or otherwise.
Businesses should not be being broken into and vandalized.
Monuments of art and history should not be defaced.
I don't like Clarke or his persona at all.
Personally I think he's a dangerous zealot himself, however
people should not live in fear.

posted on Nov, 11 2016 @ 12:03 PM
link
To everyone thinking these are just stupid kids breaking their own neighborhoods and crying, you have no idea of the anger and resentment that is now felt by young people that will soon be directed at any government bearing the name of Trump.

I hate to break it to you, but the right wing scared safe space liberal narrative is a lie. I'm a millennial, and even I'm not sure what has just awoken. But it's big, and its going to be scary to a lot of the establishment Trump types.