Non-Americans of ATS, are you as amused and disgusted as I am?

Democracy just doesn't sit right with some people, we are living through a hellish Tory Government elected after promising a referendum whose MP's do not seem to want to abide by its result (whose Human Rights abuses of the disabled has just been condemned at the first ever UN investigation into such matters, shameful) also with an unelected leader at the moment so I don't think we can be critical too much.

All politicians are corrupt and most people demonstrating haven't even read the Podesta email and just think Hillary has a nice smile.

If they want someone to blame, blame the DNC and if they need to know who wants to start a race war look at George Soros.

Good post and, like you, I have a very bad feeling about our future. I sincerely hope you're wrong, a hope that hits especially hard when tucking in my beautiful little children at night.

This was done by design. We can either use the blueprint given to us or tear the whole building down. Neither choice is very appealing.

I agree, as I said there are a few who have threatened to vote against it, but it will happen despite this.

posted on Nov, 11 2016 @ 10:40 AM
link
It's understandable that a lot of people believe that what we have seen in terms of foreign policy in recent years and in this election cycle gives a true picture of what an average American is like. It is worth taking the time though to separate all of this from how ordinary Americans actually think and behave.

I am not an American but even I can see that the judgements you cite on the American people are based on what has been portrayed in the MSM and on sites like this one. Americans are always portrayed by their own media and that of others in a certain light and it bears little or no resemblance to how the majority of the people of the US actually are. What you have seen on ATS lately are people communicating from behind a keyboard and that, as we know, is almost never a true representation of how those people actually are in human interaction.

"My candidate didn't win, so I'm going to participate in the Collective Tantrum."

Trump won for a reason. People are sick and tired of the Liberal bulls***.

posted on Nov, 11 2016 @ 10:55 AM
link
To keep it nice & short, everything about this election from the mouthy campaigns to the mouthy aftermath has me identifying with Red Forman (character from That 70's Show for our foreigners) posted on Nov, 11 2016 @ 11:00 AM
link
I would also like to remind people that there were many Trump supporters who refrained from speaking openly about their support of him and/or wanted to put out yard signs, etc., but didn't for fear of retaliation.

Think about that. We are seeing the corresponding behavior in the Liberal sector on the streets rioting, beating up Trump supporters, and destroying property since Tuesday.

Who is really the threat? I think it's pretty obvious.

Just to point out us British have the most healthy teeth in the world we just don't often go for cosmetic crap.
OP yes everyone around here is just shaking their heads.
It wouldn't bother me if it did not effect us but seeing he is throwing out everything to do with climate change I feel we can say the USA have made a mistake. 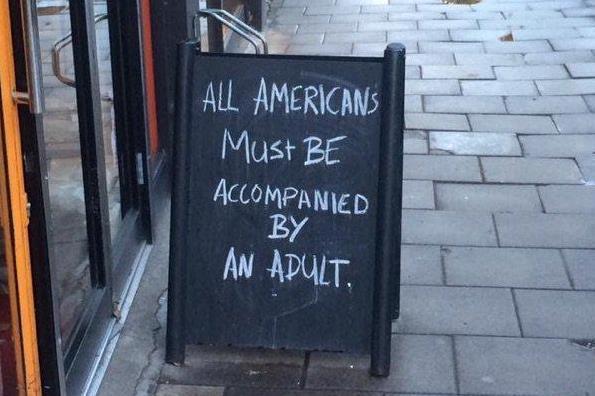 originally posted by: Swills
a reply to: mr-lizard

I'm so embarrassed that Trump is the leader of the free world.

Why? Ignore the media crap etc. And nobody is perfect!

He will do a good job: As I posted in another thread:-

Those who didn't vote for TRUMPOTUS the TRUMPINATER will in a few years be grateful to those who did. When will people wake up and realise that politicians are corrupt, self interested and not capable of running a country in the best interests of the people and the peoples needs! It needs a maverick business mind. And I can tell you from personal experience that mavericks with brains and balls deliver far more than useless politicians do!

Good luck to TRUMP, although his job will be difficult he will be a good POTUS, like RR!


originally posted by: Swills
a reply to: mr-lizard

I'm so embarrassed that Trump is the leader of the free world.


Why? Ignore the media crap etc. And nobody is perfect!

He will do a good job: As I posted in another thread:-

Those who didn't vote for TRUMPOTUS the TRUMPINATER will in a few years be grateful to those who did. When will people wake up and realise that politicians are corrupt, self interested and not capable of running a country in the best interests of the people and the peoples needs! It needs a maverick business mind. And I can tell you from personal experience that mavericks with brains and balls deliver far more than useless politicians do!

Good luck to TRUMP, although his job will be difficult he will be a good POTUS, like RR!


I do ask what if Trump is successful then what for the future of politics??... I also think he has more than a good chance..

I am not at all amused, I am utterly disgusted.

I am disgusted at the lack of foresight, the lack of integrity and the fear necessary to come to a pro-Trump conclusion on a national scale.

Why? Because it is weak. It is pathetic, and that is something I never thought I would say about the electorate. They gave in to fear, and what is worse, is they foolishly believe what they have gained is strength.

You shouldn't be pointing fingers. Your country has its own dirty laundry.


Anyway this is directed towards all non-Americans of ATS. Are you as worried, disgusted and appalled at the toddler-esque behaviour as I am?


Yes.
I feel a disturbance in the force , something's gone very wrong.

I'm afraid I must disagree.
It may be amusing to watch their struggles because they do everything out there in the open, they might be childish and idealistic to a fault but let's be realistic for a moment.
They are a still a young nation with issues to resolve and lessons to learn.
Europe has a bloody history of at least 2000 years of fighting and killing each other; there are still survivors from the last WW they started and costed them many millions of lives. Not to mention more recent war in Bosnia and the surrounding area; when "mature' people disagree they don't joke, do they? And they still are not at peace.
There are more riots and victims after a soccer derby in UK then there are after this election in US. What about all the rapes and criminal behavior that is hush-hushed and forbidden to mention in one of the best European country? What about recent Germany's "import" of immigrants that is also so uncool to criticize? Not the nicest things to watch.

When politicians are corrupt and media is corrupt, the people are confused and do stupid things. Good thing that every once in a while the Americans like to sweep the house clean and throw the dust outside; is uncomfortable for a while but after that they can start anew in a cleaner environment.

I come from Europe but I have no reason to look down upon Americans and their troubles; I'd rather laugh and joke at Trump than have things rotting underground and stinking to the high heaven, like is the custom in Europe.

I believe that the normative american is as appalled by the current situation as you are; but I also believe that with enough time they'll repair things and bounce back with even more optimism and idealism.
I don't know if Trump will be good for their country or not, but i'm glad they finally got rid of the greater evil just like I was happy when british people voted for the Brexit. Their struggles are not less legitimate than any other's country in this world.
So for everyone's best interest I hope they'll make it on the other side without any major earthquakes, only with laughs and jokes.

posted on Nov, 11 2016 @ 11:47 AM
link
Christmas shopping last night, some cashiers were on a break and standing around the customer service desk laughing and joking around.

Then I heard one of them say "It's all Trump's fault!" and the laughter broke out into a roar, including many of the customers standing in line at the check-outs.

So apparently my fellow countrymen are more amused than anything else ?


I know my hubby and the guys he works with are all having their fair share of poops and giggles about it... he's sending me e-mail after e-mail of neverending Trump jokes (he's currently working up north at the mining camp).

Personally, I'm not finding this to be very funny anymore.

Before the election I was amused, but now ? Not so much.

I've become a wee bit worried for our friends south of the 49th parallel, it's getting quite ugly down there. But I'm grasping onto the hope that it's just a "heat of the moment" type thing that will eventually die down.

Fingers crossed for them.

I would say that anti-US sentiment has always been around at least so far in my short life but it does seem to be ramping up. At least we have a nice big ocean in between us.

If you invite derision you will receive it , this isn't about anti-US sentiment it's disappointment that you could make such a massive mistake , a mistake that effects more than just your country.