I wonder if there is anyone here on ATS who thinks this is okay. I would hope not

I think it is ok for the Clinton's to face jail time, their supporters can visit them once a year - suicide is the easy way out. Their supporters need to wake up and see how crooked their demi-gods are. Scum


What would you have gotten if you voted for Clinton?.... thats right...... as long as the racist activities occur in Syria, Iraq, Libya and Iran its ok right.. the poor souls being annihilated bought it on themselves too... right?

Don't forget she wanted to start a war with Russia as well, that would have gone down really well for the planet

Really, you think that's what Anglin's saying, if not kind of proves my point doesn't it...?

Let's be clear "you" create the problems in order to suggest "your" solution, in order to create the SJW morons their equal and opposite extreme is required in the form of Neo-Nazi's, these can then be suggested as indicative of Indo-Europeans in general and thus the cry goes up Death to Whitey! and threads like this you're all over like a rash.

Actually, I can say I've literally written a book on now (Preventing the Fourth Reich), where in it I've laid out how essentially every major metric in Nazi social engineering / propaganda techniques (and more such as some key mechanisms to their rise to power) have been the modus operandi by the DNC / MSM in recent years, in general, and in Hillary's campaign in particular. Ver. bat. im.

Add to that, the followers of it increasingly exhibit attitudes, behaviors, etc like from straight out of the Third Reich: cCensorship, bullying, hate speeches, vandalism, assaults, riots, "doxxing", murder, MASS MURDER, and so on. Straight. Outta. Third Reich.
edit on 11-11-2016 by IgnoranceIsntBlisss because: (no reason given)

Let's be clear "you" create the problems in order to suggest "your" solution, in order to create the SJW morons their equal and opposite extreme is required in the form of Neo-Nazi's, these can then be suggested as indicative of Indo-Europeans in general and thus the cry goes up Death to Whitey! and threads like this you're all over like a rash.

That's the party line: "The Zionists are creating Neo-Nazism to scare the sheeple into hating us oppressed Aryans."

There's only the Neo-Nazi's dumb enough to call themselves Aryans and they hardly think the Zionists created them, so you have a non-sequitur right there, i'll help you out though it's a position of the Alt-Right and the reason behind their schism from the Far-Right, as was explained in the link i gave.

"Remember that one time something happened and somebody said it was racist and you didn't say it was bad? That means you're racist."

That's not what I said, but can you explain what's wrong with the argument? Oh, and do you approve of the racists baiting people like that? (Just so we're clear. I wouldn't want people jumping to conclusions about you.)

Why do you expect that any time anything happens people have to line up to denounce it so you feel better?

Maybe I just don't give a damn about the KKK and can't be arsed to give them the time of day? Why is that not good enough? That's what's wrong with the argument. There's crap that happens every day that I don't agree with nor do I approve of, and if I took the time to make a proclamation every time anything happened I didn't like, I'd never have time to do anything else. To expect anybody to do that is absurd.

Is it different because it's the KKK? Absolutely not. They have the right to say nearly anything they like. I have the right to ignore them. If you choose to interpret my ignoring them as agreeing with them, is that your problem or mine? 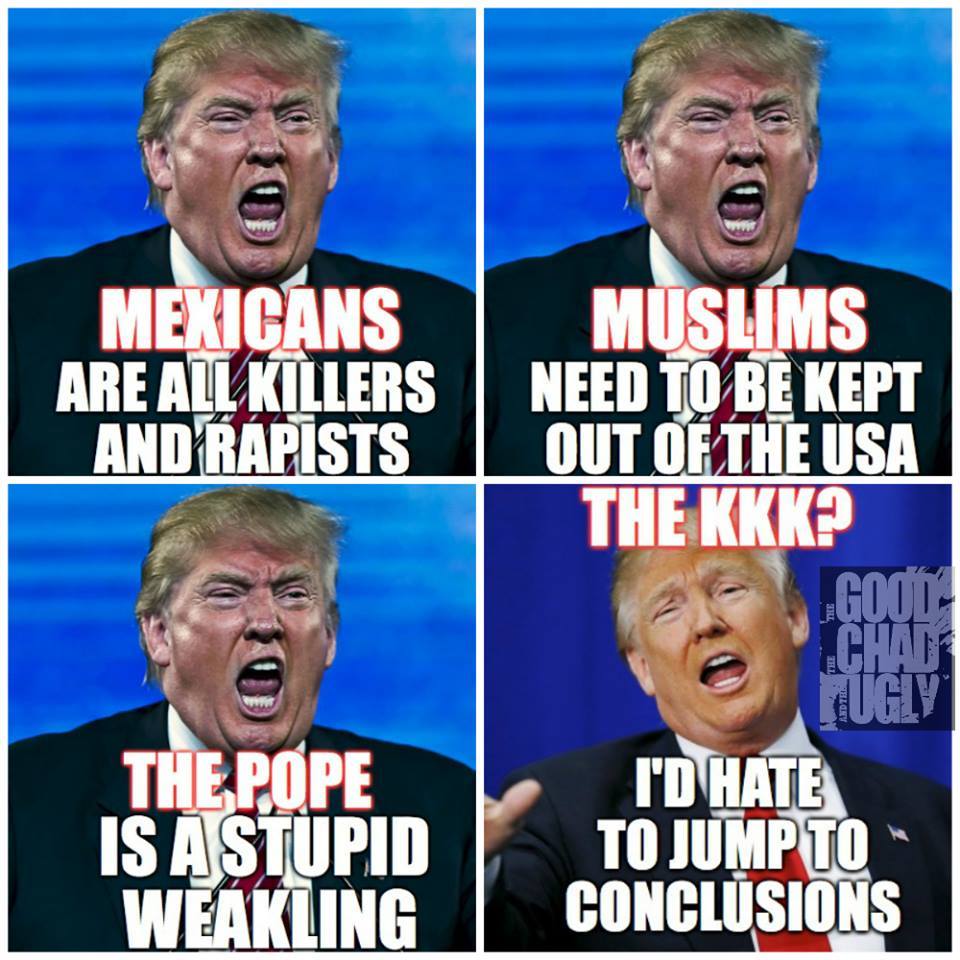 You think he was being "sarcastic?"

All "racism" even is is tribalism. It's pretty cut and dry actually. That's means EVERYONE is "racist", as humans are genetically programmed to be tribalistic.

Take professional sports, the fanbases (my city state can beat up your city state). If you're into all that you're a "racist".

Indeed, race tribalism has to be the most logical form of tribalism that would naturally come about, as irrational as it makes everyone.

So the very idea of protesting against triblalism by responding with even greater tribalism, has to be one of the all time cruelest jokes.


I agree. I've always said everyone has a little bit of prejudice in them. It's part of being human.

So answering the question you asked is "protesting so much" now? Lol good try buddy, good try.

You do a fine job of bullying, shouting, and spewing vitriolic hatred all over this site. If your posts are any indicator of the tone of your published prose, it sounds like something Alex Jones would write. Your tone in general sounds much like him anyway. So -

thanks for clarifying. Hateful, antagonistic, furious, sensationalistic claims do not make intelligent thoughtful people want to read more. They make decent people sick. If you can't tell the tale without being venomous, then you are just the same as the people you spit at AND the people who THIS TOPIC IS DISCUSSING. Are you one of them? Sounds like it.


How many suicides do you predict you will incite with your uplifting and happy tome? How many has dear Alex indirectly caused? What about Bannon? How about Assange? How are you rising above all of that? You aren't. So I conclude that you are championing this new instigation of unspeakable ugliness.

You think he was being "sarcastic?"

I think it's a meme of things he didn't actually say but people like to say he did say. Politifact did a nice job of explaining the inaccuracies of the "all mexicans" claim. The "all muslims" claim is, while technically accurate, nothing more than a snippet of a broader comment and lacks context.

That is sick. That is mobster talk. (sic) It is monstrous mobster banter. Like in the car behind the blacked-out windows under the wharf at midnight. That's just how all guys talk in the hit-mobile...just banter. Right?

The Mudpit or not, I am making an observation and providing feedback regarding just how this new "movement" to cleanse our nation has effected all of us. If I am open about my assessment of the way they speak, and it reminds me of you - how is that off-topic or offensive?

Don't you WANT people to notice what you're saying?
Just asking. But, if you aren't one of them - then perhaps make that clear. Injurious statements are legal in term of "free speech.". Trying deliberately to push someone to suicide is depraved.


ETA: Yes. Tribalism is human. It is a naturally occurring species-tool to keep us together. We should have evolved past being hideous to each other, however. It's called "CIVILIZED."

That savages will be savages is a fact. You can choose NOT to be a savage, though. Because education.
edit on 11/11/2016 by BuzzyWigs because: (no reason given)

Thanks, I thought so

Not really. The only way to really eradicate terrorism entirely is to kill them all.

Is that right? Is it humane? Is it good?

Nope. But killing a few terrorists breeds more terrorists. Leaving terrorists alone breeds more terrorists. So the only thing that gets rid of terrorism entirely? Killing them all. That's why the "war on terror" is perpetual and never-ending: the only way that war can be won is by employing methods most people don't find acceptable. Acknowledging that fact is neither banter nor some horrible thing for a person to do. Your average 20 year old lance corporal in the Marine Corps can explain to you how to defeat terrorism, and can also explain it's not feasible.

I know it's scary to some folks to be able to conceive of something like that and talk about it in abstract terms, but it is what it is.


If I call a murderer a murderer, is that vitriolic?

If I call a modern day equivalent of the nazi's of old as being the Nu-Nazi's, is that hateful?

I actually do hate what the SJW's are doing. I am furious they've gone and went hawg wild whipping the nation into a blaze of tribalistic fury despite the fact that the blacks got their black presidents, women / minorities are 'taking over' new good jobs market now, gays got their gay rights, and the trans even got the school restroom policy in every elementary school across the nation...

They were given those things they 'held most dear', and yet still weren't happy. Instead, they grew even more furious and HATEFUL. Rioting, countless atrocities including murder have flowed out from it all. Since the 'SJW trend' is really but a few years old, and has erupted into all of that this rapidly, how can anyone look forward from this pattern and see any good outcome? How can anyone look at the countless atrocities so far and not be disgusted? Yet you people defend, nurture and coddle them.

The drama queens wanted ALL the attention in the world, which they EXPECT to center around them, and now this year they finally got mine. And you know what, you set about burning my nation into ashes and you bet I'm going to be furious and antagonistic.

If they all do commit suicide, along with the Neo-Nazi's, good riddance. But it's not like I set about such as an agenda, so buzzy off with your wigs!
edit on 11-11-2016 by IgnoranceIsntBlisss because: (no reason given)

No need for suicide. Just enjoy the prosperity that President Trump will bring to ALL the people of this great nation.