page: 1
24
log in
join
share:
Ameilia
+1 more
posted on Nov, 11 2016 @ 12:10 AM
link
A college student in Louisiana claimed she was attacked by two Trump voters, one wearing a "Trump hat." These two terrible excuses for human beings jumped out of a car, beat her, stole her hijab, and also stole her money. Or not.

The woman called police Wednesday to say that two white men, one wearing a Trump hat, hit her several times, screamed racial slurs at her and stole her wallet and hijab. Lafayette police have been investigating the incident as an armed robbery and hate crime. However, Thursday afternoon police issued a terse statement, saying that she had admitted she made up the story.

I'm glad police took the time to investigate this incident and that it was easily proven false. One of the two source articles has been updated to reflect she will be charged with filing a police report.

Hopefully this story will spread far and wide, as it showcases progressive liars and the fact that making up this kind of crap in a lame attempt to make "the other side" look bad will backfire in your face.
edit on 11/11/16 by Ameilia because: fix title

We've all been lied to for so long.

posted on Nov, 11 2016 @ 01:24 AM
link
This is happening all over, the trigglypuffs are in complete meltdown. When you need to invent these BS stories your probably on the wrong side. 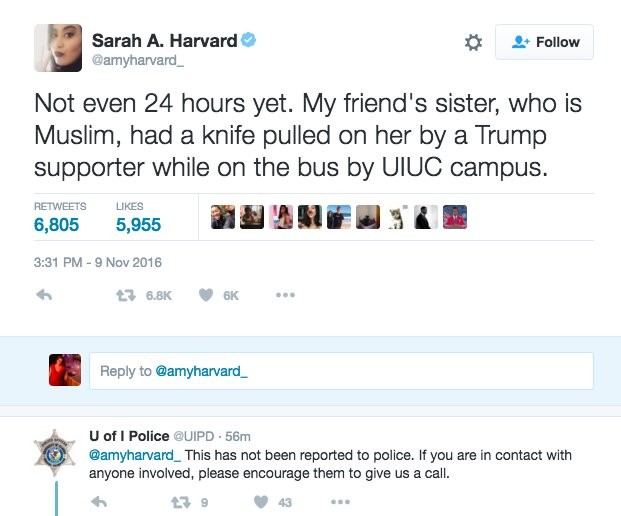 That's hilarious. Someone started a thread here earlier, citing that Tweet and saying that "Trump voters" were violent and racist. I refuted this Tweet, asking for an actual source. Anyone can make crap up.

Of course, that thread has already been deleted.

I think they would end up destroying themselves from the inside out before they do any real damage, it's their nature.

KPTV News This source includes photos of the damage

What will they fight a war with? There isn't one of them that believes in the 2nd Amendment......


Sorry if anyone takes offense to this, but seeing the sheer amount of sore losing, people literally crying....CRYING over a political candidate losing an election, and protests and riots over this where they expect what? to have the results overturned and a dictator installed into power? and make no mistake that would be a dictatorship.....the sheer amount of all this just really wears pretty thin to be honest.....for cripes sakes....grow some skin people!! Fix your dang party, hold them to task and make sure they don't rig their own primary so an establishment piece of dung like HRC gets the nomination.

posted on Nov, 11 2016 @ 03:39 AM
link
It's sad because no one really takes reports of racism seriously anymore. Rape claims are going down a similar rabbit hole. Both should be serious issues.

1) She's a Trump supporter and her strategy was to file the false report, then admit it was false the next day to make Liberals look bad.

2) She's a Liberal and is justified because any crime is justifiable to make Trump look bad even though the claim he's racist is unfounded. But that's super important because they've been telling themselves he's racist and need to create some proof so will lie to create that proof to support their original lie so they'll finally believe in it though they know it's just a string of lies.

originally posted by: RedDragon
It's sad because no one really takes reports of racism seriously anymore. Rape claims are going down a similar rabbit hole. Both should be serious issues.

It's so bad that I've been so freakin desensitized to it by the fakery going around that I'm seriously considering advocating lowering the penalty for the real thing.

I did just say that. I lament that horrible reality, but no one seems to know how to be reasonable about the varying degrees of criminality anymore and people embellish and lie so much that I'm just worried by injustice too much and think, just in case, the penalties should be lower because I know tons of innocent people are going down over bogus gibberish.

And our pathetic courts seem all too willing to convict people without even any decent evidence. Prosecutors seem gung ho about going after people just because, and they seem unwilling to be reasonable about anything half the time, and defense lawyers are freaking jokes half the time as well.
edit on 11/11/2016 by muzzleflash because: (no reason given)

People cry wolf, make false accusations, or turn minor grievances into something bigger than they should be long enough, people stop listening.

The people responsible for things not being taken seriously are the ones that have watered down the real issues with watered down bull# versions of it. It is sad.

But these things aren't taken that seriously anymore for a reason. When a person can accidentally be a racist for a "micro aggression" and telling someone they're attractive can be treated as sexual harassment things can't help but start going bonkers. I've seen a girl assault a guy with her drink for turning to her and telling her, and this is the exact words, "Wow, you're really hot." That was it. Seriously, that was it? They complimented her in a club and that deserves a drink thrown in his face? You'll never get that reaction from me for a compliment. Turned down maybe but that's it.

In order for things to be taken seriously again, people that take things that are not rape, that are not harassment, that are not racism and try to insist they are and should be treated as such, need to be reacted to with the same kind of scorn we do for those who commit the real acts, because this behavior makes such acts easier and protects them by masking it with piles of BS. False accusations can be just about as damaging as the real thing.
edit on 11/11/2016 by Puppylove because: (no reason given)

posted on Nov, 11 2016 @ 07:41 AM
link
I wonder if she gets to wear her hijab in her mug shot? Well look at the examples the DNC has set for its supporters - lying and cheating are totally okay!

posted on Nov, 11 2016 @ 05:47 PM
link
That's just disgusting in general. Fabricating lies about being robbed and assaulted. I hope her lying sneaky butt goes to prison and she can then run to the guards and complain about being robbed and assaulted but for real. Stupid stupid stupid! Also i hope you're piss poor and your family goes broke trying to "Defend and Justify" what you did.
edit on 11-11-2016 by SPHARAOH because: Needed to add something.
edit on 11-11-2016 by SPHARAOH because: First post jitters

originally posted by: SPHARAOH
That's just disgusting in general. Fabricating lies about being robbed and assaulted. I hope her lying sneaky butt goes to prison and she can then run to the guards and complain about being robbed and assaulted but for real. Stupid stupid stupid! Also i hope you're piss poor and your family goes broke trying to "Defend and Justify" what you did.

People generally don't go to jail for filing a false police report in the US. They get probation, perhaps a fine, perhaps mandatory counseling sessions on how not to be a pathetic melting snowflake. Which is fine. She'll have a record now, even not going to jail. That will have long term, serious consequences. If she is on scholarship, her scholarship may be jeopardized. It can also impact her ability to find a job.

I know that's why i said hope.
Either way shame shame double shame know we know your bloody name.