Two weeks ago, the Clinton camp was appalled that Trump suggested he wouldn't accept the immediate outcome of the election.

How DARE he ignore the democratic process and peaceful transfer of power we've maintained for centuries. What NERVE!

Then Trump was elected. Democratically. In a free election. And now you won't accept that?!

You run around rioting in the streets, lighting flags on fire, damaging property, and blocking traffic... why? Because the election didn't go the way you wanted it to? Do you really think riots and protests are going to change the vote? NO!

And some of you even have the audacity to spew hateful vitriol on social media, call everyone racist, blame "whitey" for everything, and even make death threats.

Whatever happened to #LOVETRUMPSHATE ? You've turned into the hateful, non-democratic, un-American, pissy moaners that you were all against in the first place!

This kind of crap is all over social media:
"You hateful bigots did this! I hate everyone of you f****** bastards that voted him in! I hope you all die!"

Really?? This behavior is insane! How do you justify this nonsense??

Everyone just needs to CALM THE F DOWN. It's just an election. You don't have to like Trump, but he is going to be President whether you like it or not. You can either hope for the best, or you can make it even worse.

If you really want to DO something PRODUCTIVE for your cause, start working on influencing the next election. It's only 4 years away.

You need to listen to your own candidate when she says it's time to unify and accept the outcome of the election. Are you still #WITHHER ? 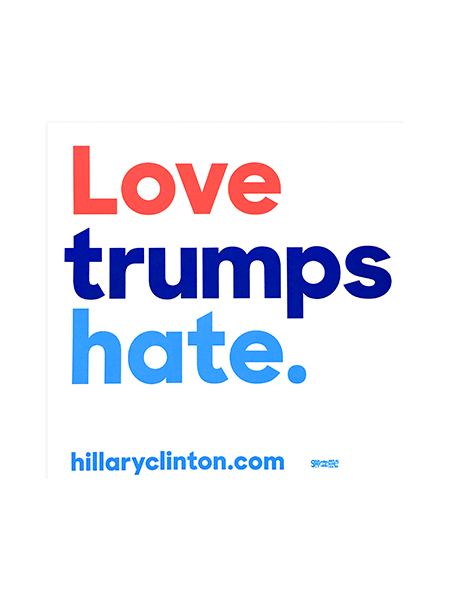 And for anyone wondering - I didn't vote for either of them.

Honestly I think the gods intervened just for the laughs!

The hypocrisy is staggering, I did not know anything about that motto, but it is a good one... Love indeed Trumps Hate, these people better start acting like it.

I wonder if any of them have any idea how easily they have been played by the social engineers, running into the streets and causing chaos only benefits the State. In no way shape or form does it have an effect on the results of the election... it simply sets the stage for more militarized police.

Plan B is going to get quite ugly, these people really should have demanded that Bernie was the candidate of their choice regardless of the corrupt Clinton machine.

I am sure Hillary is paying her penance right now to her wonderful Rothschild masters, perhaps some variation of a "Spirit Dinner".


No longer. I was nearly attacked by two of these types in a god damned grocery store while buying a gallon of milk.

These two wonderful examples of why brothers and sisters should not marry and procreate decided that I looked like a Trump voter.

Because I looked like a Trump voter? Really? That gives you mouth breathing morons the right to threaten me with bodily harm?

I don't know whether you two idiots ever frequent this site, on the off chance you're actually smart enough to read, that young store employee that interrupted you saved you from shedding blood, lots of it. I had a 3" folder in my hand ready to go the instant you started in.

Thank whatever deity who was watching over that dairy case, because I'd have done my best to kill you. (((Yes, I'm psycho like that...)))

Sitting here in my chair, I'm very happy I didn't have to.

But what the actual **bleep**, people? If you idiots don't knock it off, someone is going to get killed. Two of you came perilously close to that tonight.

Please. I don't much care about you idiots, but there's some good folks out there who've done nothing to deserve this...save disagree with you.

Doubt it they would be too busy working.

Who's they? I said Trump.

Damn that is quite the disturbing reality check there!

This is one of the things that people need to realize on the side of the liberals, especially the ones that choose to physically assault anyone they deem to be a Trump supporter, odds are they are legally carrying!

And the reason they are doing so is random absurd violence that we are beginning to see pop up everywhere.

I am glad that you did not have to defend yourself in that manner Seagull, at least you were ready if you had to!

My bad, my eyes got screwy.

The longer I sit here, the more grateful I become...

I'm fairly sure at some point tonight, Jim Beam and I are going to have a conversation...

originally posted by: seagull
a reply to: elementalgrove

The longer I sit here, the more grateful I become...

I'm fairly sure at some point tonight, Jim Beam and I are going to have a conversation...

Omg. Never have I been so concerned about the future of our country. Not only has the social contract with out government and institutions been broken, but we are on the verge of a cultural war that will truly claim lives.

I hope I am wrong. But remember this, in the six thousand or so years of recorded human governance, we have never truly gotten this right. What makes us think the short experiment in this country is so unassailable?

Wake up people. Our peril has never been greater.

As I said in another thread, Stronger Together and Making America Great Again are not mutually exclusive concepts.

posted on Nov, 10 2016 @ 11:37 PM
link
Found this on YouTube. Kinda touches on what I was ranting about in the OP. (Though he might have used a bit more sharp & contemptuous language than I did).


ETA: I never would of thought I'd be posting in the Mud Pit. I kinda do my best to avoid this forum like the plague. But I gotta say, it's kinda nice to rant a little bit. Thanks for listening - to ALL of you.
edit on 10-11-2016 by SoulOfCeres because: (no reason given)

posted on Nov, 11 2016 @ 03:07 AM
link
The MOST DANGEROUS protesters aren't the ones we're seeing on Television. I bet ISIS recruitment in America is SOARING.

I wonder what would happen if Soros stopped funding them? I saw them protesting at the state Capitol last night. Tour buses lined up all along Broadway in Denver. These people are being bused in from God knows where. These protests are contrived. Bought and paid for.