originally posted by: Xcathdra
I always enjoy it when people all of a sudden have an issue with something thats been around for years. Where was the outrage when Obama was in office...

Posters on this site have been discussing and decrying private prisons since the Bush administration.

Yes, people do not understand that the economic ideology of the new administration (which holds all three branches) is (Koch) Libertarianism, which means "drown (federal) govt in a bathtub". All matters, such as marijuana, etc., are entirely up to states; so, yes, the fed may stop using private prisons, but the states will pick up the private prison mantra. Private state prisons, and private state everything else, is the next goal of the Koch movement.

originally posted by: Kali74
a reply to: SaturnFX

Wait, you're blaming progressives rather than Hillary and the DNC?


the hyper-outraged progressives pushed soo many liberal / center left people to a point of total apathy.

less than half the registered dems voted because of apathy and disgust for what has become.
but hey, what do I know, I am just a dirty cis white male who needs to shut up.

so I did
I shut up..and damn sure didn't help out...and I absolutely garuntee you so did many others just like me.

I am seeing that the sjw riots now are pushing for a re-election in 2020. double down in alienating all but the most extreme elements of the power.
As lacy green put it: 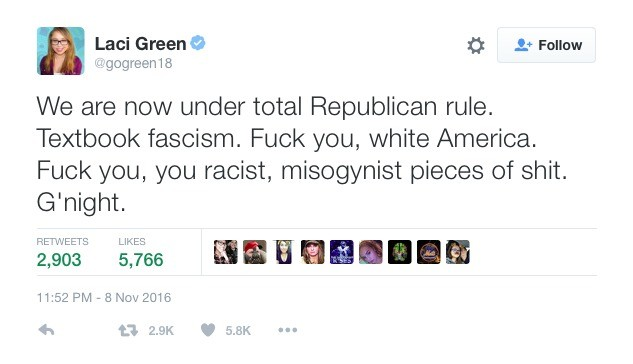 This is progressivism 2016
this is racism, this is actual sexism.
This is why people like me, who you damn well know is a liberal, has become absolutely disgusted with the ass cancer that festered these last few years in the left..and its why we need to keep losing until its addressed, because if my house is on fire, I will not be putting it forward as the ideal to reach for the neighborhood. I will close down and stomp the fire until it is out, or the house is a loss.

stop fighting for the fires rights.

I'm glad you bring this up.

The left (which includes liberals and Progressives---the two are not the same) has always argued among themselves, since they value the freedom to do so. The right OTOH falls in line, because they value authority. Because we have been drifting, being pushed further rightward, where conservatives are called liberals, we now are in the grasp of rule by authority.

True progressivism exists, but it has lain hidden among the debris off this rightward drift. It seems the right time to dig it up and take another look. Laci Green no more represents Progressivism than Donald trump represents conservatism. She is angry, as many of us are, but anger must be turned into positive action, into progressive work. (As Liz Warren says, we need to get up off the ground, dust ourselves off, and get to work.... one way is volunteering in those organizations we value, even if only one hour a week)

What Does Trump’s Victory Mean for Progressives?

Democrats and progressives must grapple with the deep sense of alienation that drove both the Sanders and Trump campaigns. A status-quo, insider candidate who is a close to both the Washington establishment and Wall Street was never going to be a credible vehicle for populist concerns.

It will be tempting for Democrats to make fun of Trump, and of the people who support him. Cultural disdain for “white trash” voters helped feed those voters’ sense of alienation. Democrats have to offer more comfort to the afflicted and affliction to the comfortable if they hope to build a real and effective opposition.

Young people must not fall prey to the idea that an election alone will save us. Not 2020. Now. Electing progessives to Congress will help, but turning up the Progressive voice louder is the key. Pushing from the outside in. That is all that will save America now.

Will Democrats and their friends and allies question their belief that the political professionals are best suited to decide who runs?

Thom Hartmann is a much better voice for Progressivism.

Want to avoid privatized prisons? Turn up the progressive voice.

originally posted by: desert
a reply to: SaturnFX


Whatever you want to call it, what Lacy represents is now the mainstream of the left, and it is the most toxic, identity politics driven, racist, sexist crap you can ever possibly imagine.

it is nicely coined the "regressive left" as it puts skin color and gender on top of all ideas and ideals..aka, same crap as the pre-civil rights era, just with different players and the same mindset.

That is not the left I want to be associated with. They are putting on the hat that this stuff is now considered progressive, and if that's progress, then I want no part in it and it must be stopped.

liberalism is a lot of things. some good, a few things not good at all, but overall its meant to be a mindset of liberty, freedom, science, and progressing humanity through works of understanding and debate..exploration of new and unique ways of thinking. a near idol love for the arts and sciences, of entertaining new ideas, etc..

Todays progressive politics is the antithesis of all these things. rejecting science, rejecting artists, trying to ban and censor forms of entertainment, bullying women who simply don't buy into the western 3rd wave feminism stuff, shutting down any conversation simply because they don't agree with the opinions presented (The textbook definition of bigotry), safe spaces free from debate and facts, etc etc.

Agree. That is not what you and I know as liberalism and certainly not Progressivism. Do get a chance to visit Thom Hartmann's website and listen to his programs (I follow his radio show). You will not hear talk like the tweet, trust me.

The Progressive left voice is just warming up, but it's not the voice of the "regressive left".


originally posted by: Xcathdra
I always enjoy it when people all of a sudden have an issue with something thats been around for years. Where was the outrage when Obama was in office...

Posters on this site have been discussing and decrying private prisons since the Bush administration.

and yet Trump is not president yet and somehow his name makes the title of the thread... yeah nothing fishy there. Where was the outrage during Obamas term? Why didnt they push obama to end it? Why is it only a major issue when the office holder is republican?


Secondly I would wager the people bitching have no clue how the private prison system works in the federal system let alone the number involved.

originally posted by: Xcathdra
Where was the outrage during Obamas term?

I know the search function here is not the greatest but I found that Bush-era thread in 5 seconds. I feel pretty confident you could locate one calling out Obama if you bothered to look.

Why didnt they push obama to end it?

Why is it only a major issue when the office holder is republican?


Secondly I would wager the people bitching have no clue how the private prison system works in the federal system let alone the number involved.

Make a thread and educate everyone.

originally posted by: AugustusMasonicus
Make a thread and educate everyone.

Already exists and I did in that thread. Here it is again -


ATS - Justice Department says it will end use of private prisons

Not really.. more lip service than anything. The feds only used a small number of those types of prisons. The BOP system are all government controlled / staffed.

All of which are low security facilities. The FBOP operates 122 facilities including the ones listed above.

Contract facilities operate according to a Statement of Work (SOW) or Performance Work Statement (PWS), which outlines the requirements for operating under the contract. Contractors are required to follow all applicable local, state, and federal laws, codes, and regulations for the jurisdiction in which they operate. In addition, they are required to adhere to some BOP policies such as, inmate discipline, use of force, sentence computation, and inmate classification.

Contract facilities must obtain accreditation through the American Correctional Association (ACA) and The Joint Commission within two years of receiving inmates.

Contractors are required to follow all applicable local, state, and federal laws, codes, and regulations for the jurisdiction in which they operate. To ensure the safety and security of the inmates and community, the Bureau places several staff on-site to monitor contract performance and to ensure contractors perform in accordance with the contract terms and conditions.


The Federal system has something called Inmate Work and Performance Pay.

The slave labor comment is a bit off. Secondly they are in prison to pay their debt to society for the crimes they were convicted of. It is not suppose to be a hotel.

The only exception is facilities are not required to pay the minimum wage.
edit on 14-11-2016 by Xcathdra because: (no reason given)