posted on Nov, 10 2016 @ 06:34 PM
link
A Hillary Clinton supporter still pondering the future with Trump winning the election, decided to take a walk in her favorite park...

Little did she know who she was going to run into...

Margot Gerster posted on Facebook that she was feeling so "heartbroken" after the election that she decided to go for a walk Thursday.

The White Plains, N.Y., resident took her daughters to one of their "favorite places" in Chappaqua, N.Y. It turns out Chappaqua's most famous couple were also on a head-clearing hike. I have to admit, Hillary looks genuinely at peace in this photo.. just sharing with ZERO politics involved

posted on Nov, 10 2016 @ 06:47 PM
link
It's amazing the difference in appearance when the reptilians stop possessing your every move. Losing the presidency probably saved her life. She looks real in that photo.
edit on 10-11-2016 by cooperton because: (no reason given)

Reptilians and all aside the pressure of a campaign must be huge and the loser must be relieve, the winner got it worse because now the hard part begins.
edit on 10-11-2016 by Indigent because: (no reason given)

I hope that lady doused herself with some Holy water or something afterwards.

originally posted by: Indigent
a reply to: cooperton

Reptilians and all aside the pressure of a campaign must be huge and the loser must be relive, the winner got it worse because now the hard part begins.

Could you imagine your every move for the next 4 or 8 years being monitored and judged by a large majority of the american and global population? Yet Joe Shmoe on his couch screaming at the TV thinks he could do a better job...

Blows my mind when people call Trump an idiot.. I'd like to see them try to get elected president of the United States. The proverbial glass house has been broken many times by all the stone throwing done in these past couple days.

But yeah reptilians, beware. Seriously. It is what humans ignorantly stumble against. Be wise and innocent and you will rise above.

I hope that rotten bag of crap gets set on fire in a laser show accident.

Because of her stupid, lying conniving nonsense, the world was denied a shot at something good (Bernie) and has had to settle for bull snip instead. She looks at peace, you are right. Because she's a damned sociopath. No one else is getting any bloody peace, but it's just like her to chill out and enjoy a moments peace and quiet during a five alarm fire she helped start.

Well, you can't say I didn't try to keep politics out of this thread

I'm surprised that she was taking a walk with Bill. Like an actual happily married couple!

Bill must be playing careless whisper on the sax very sad thinking in all the interns he won't have.


Something to notice, Hillary does not have blue eyes in that pic.

Also, I am certain I have seen this younger person (mom) with
Hillary somewhere.

OH no! A harmless thread on a Hillary encounter is now a full blown investigation...

Yes.. Don't it make my brown eyes blue? although, the other lady is sporting some dark eyes... HRC.. not so much?

OH no! A harmless thread on a Hillary encounter is now a full blown investigation...


Ah, lol you had to expect that surely.

Where was the secret service? 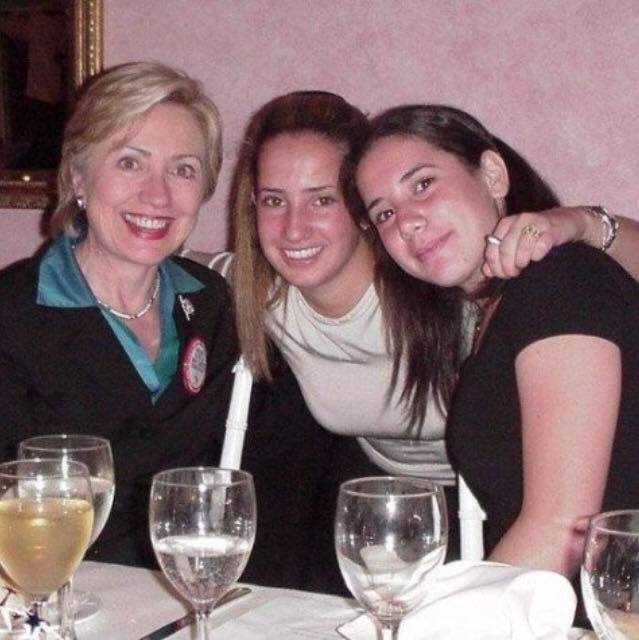 What are the chance of Hillary encounter a pretty mon with a cute baby on a casual jog on a park for a photo to show her class after losing the election? None because it was staged.

Appears there is a bit of a backstory...yes.

Plus, what about needing assistance when walking/climbing?