CNN "on the street" reporter interviews upset protester. Anchor desk outs him as a CNN cameraman.

After this genuinely upset anti-Trump protestor goes on a tirade about the election process, CNN's Don Lemon points out the fact that the interviewee is actually a CNN cameraman.

The argument itself is funny... Hillary carried only 18 out of 50 states, so by this mans logic large cities like NY, LA, and Chicago would determine presidential elections over the rest of the country.

Oh dear, CNN are getting desperate. A bit like Sky News yesterday. They were asking people what they thought of the election results and everybody was praising Trump so the reporter was cutting them off in an attempt to find someone to bad mouth him but she didn't find one!

I actually watched the full video from a Tweet last night. I suggest you might want to watch it before going off half-cocked because you saw the tail end of the video.

Here's how it started. Reporter says:

...people who don't agree with what's going on in terms of protest. I just wanted to as a real quick question, you said you don't mind the protests but you're a little frustrated with how they're blocking the streets and what's going on.Tell me a little bit about you feel about what's going on.

This is what he said at the beginning:

They're blocking the streets. They're burning flags. They're standing on buses. They're writing swear words all over buses — it's not helping — this isnt.. this is not helping. I wanted Hillary to win more than anybody. Anybody. And to stand out here and to have a call to action and to not be specific. That's why we're here — why we're here now — because we haven't been talking about policy. Because we haven't been being specific. Because we've been talking about ...uh... things that don't matter — personality — not policy.

Then he goes into a rant about the electoral college. The odd thing here is because of a snippet of the end on YouTube where Don Lemon straight up says he knows the guy and names him (that's how conspiracies are done, obviously) people are commenting about how he's a planted protester.

This guy was actually criticizing the protests and trying to be "the voice of reason."
edit on 2016-11-10 by theantediluvian because: (no reason given)

I only wish that the populace would wake up. Instead of rewarding the most outrageous news, or the news that merely tells us what we want to her, I wish everyone would reward the media for the most correct and factual news. We need an entire paradigm shift within our media sources AND within their audiences.


Those whom think logically and want the TRUTH no matter how devastating it may be would agree. Those whom find comfort in "Confirmation Bias" will be offended

Hahahaa I'm not sure I even know how to properly process that!

Thanks for more context.
I actually saw the other part of that video earlier and was like "haven't I seen this guy before?" when I watched this.
That's why I was confused and like "how am I suppose to view this??"

Its officially pretend make believe improv time over at CNN.

They literally have nothing left.

Those who think logically?

Let's think this CT through.

1. The claim is that CNN staged a fake protester interview. Why? There were tens of thousands of people on the street. They didn't need to bring a shill unless the shill was there to give a false impression.

2. If CNN was going to stage a fake protester interview, why would Don Lemon say "I know this guy, his name is John [something] blah blah blah." and expose their own fabrication? The only way that would make sense is if Don Lemon wasn't in on it.

3. If Don Lemon wasn't in on it, why would they use a guy that he not only knew, but knew by name?

4. The claim is that he is a former CNN cameraman. We don't actually know that. They might have been part of a press tour together and he could be a cameraman from any number of outlets.

Given that the guy was actually COMPLAINING about the protesters, listing things they were doing that he didn't like and saying that they were going about things the wrong way, what exactly is the motivation?

originally posted by: seeker1963
a reply to: Konduit


He went to Rwanda?

Just another manipulating MSM stooge! He should start a go fund me page so he can afford to move to Canada! Hell, I would give him a dollah!

Yeah, he certainly sounds like the voice of reason... and still highlights the fact that CNN tried to pass this guy off as an educated protestor when he is really just another CNN Hillary surrogate.

Too bad someone let the rabbit out of the hat.

originally posted by: Konduit
CNN in a nutshell. 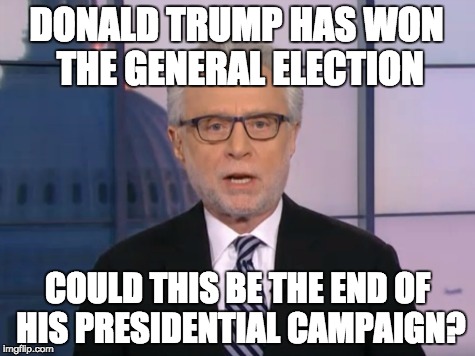 Yeah, he certainly sounds like the voice of reason... and still highlights the fact that CNN tried to pass this guy off as just another protestor when he is really just another CNN Hillary surrogate.

Let me quote our President-elect:

originally posted by: Urantia1111
a reply to: theantediluvian

Unlike before? Lol. Because that matters all of sudden. WRONG.

I watch them now just to laugh. And I'm not the only one...


originally posted by: seeker1963
a reply to: Konduit


He went to Rwanda?

Just another manipulating MSM stooge! He should start a go fund me page so he can afford to move to Canada! Hell, I would give him a dollah!

You live in Haiti?

Wow, man. Sorry. But being the MSM doesn't tell us the conditions there since the tragedy, keep us posted?
I jest a bit on ATS, but I am serious.

We honestly don't know what the conditions are there other than the bits and pieces we get from alternative news sites!

No matter, I will wish you all the best, being I am not a praying man.

Oh man, still up to the mental gymnastics I see. At this rate you deserve a gold medal.

Out of all the people he could have interviewed, he finds the one guy that the anchor knows and plays it off until Lemon has to point it out. The look on the reporters face is like a child caught with his hand in the cookie jar.

posted on Nov, 10 2016 @ 05:33 PM
link
Speaking of protesters check out this twitter post from someone in Austin.. Literally bus loads of protesters..

WOW that is EVIL

The look on the reporters face is like a child caught with his hand in the cookie jar.

He got CAUGHT and clearly was scrambling at the end. Sick CNN is a disgrace and won't even deal with sinking Bernie Sanders.

If the protesters were smart, they would burn down CNN for rigging the election from bernie. It's clear as day, now the misdirection, blame trump

originally posted by: Urantia1111
a reply to: theantediluvian

Just because someone cries wolf often doesn't mean you should just ignore them. Maybe this time they had it right?

In this case, theantediluvian offered pertinent context that actually reveals the situation we are discussing is not exactly the way the OP portrays it. And Ante was right about that point.

Though we may disagree with Ante's political agenda or views, context and facts are still important and we should be more careful to ensure we are getting the full story rather than being misled by half-truths.

I am willing to thank Ante for that vigilance though I do often, like you, strongly disagree with their motives and tactics and attitude. We shouldn't hold petty things against people and be willing to look at their claims from a neutral position. I believe it really boils down to dignity.