Celebrate Trump: In this thread we celebrate the Trump victory with the rest of the world


WARNING: The audio is terrible. The mic is overdriven, but if you turn it down it is difficult to make out. I have collected statements from each person interviewed for those with sensitive ears.

1st I love that! I know he is going to carry out all his promises.

2nd America has spoken. I believe everything trump said during his campaign.

3rd Africa. Rather than always traveling out, we are going to be here at home to solve our problems.

4th Trump is a realist. That person is very open. It is obvious that person will do very well.

5th He’s amazing, he’s unbelievable. I strongly believe that is how God want it.

6th I pretty much said two months ago that Trump will win the elections. It was when Obama could not handle the Assad problem, that was when I realize the the Democrats will lose the election. But now that Trump has won, we pray that his policies will be favorable to Africa.

7th Yea, Donald Trump victory is very good for the . . . uh . . . whole world, because if Clinton had won America would have gone down. Because the Asians and the Russians were already in the verge of taking the world power from America. Trumps policies will give us a good way to stand. Africa has been begging for a long time. Now we can stand, as an African, and build our Continent.

8th I think it is God’s wish, that is my belief.

9th I feel good! For one I am a big Trump fan. I think the American people made the right call.

11th Donald Trump is so blunt, he will tell you what he wants to do. Maybe this time around we can have peace. In the whole world. Nigeria, let us all make this country a great country too. A country that other people will appreciate.

12th The election, to me, is a game of gambling. Trump, he tried and he made out as the victor.

13th First I want to congratulate America for the peaceful election that was conducted yesterday. And I congratulate Mr Donald Trump for the victory. I see Mr Donald Trump’s victory as something that will make America the TOP as a nation. America will keep their foreign policy on Africa alive!

15th There is something I want to beg him. That he shouldn’t chase away the Nigerians that are already there.

16thWhat will his policies be like to Africa. What will Nigerians stand to gain? We know that he made a lot of hard chances against the Arab nations, Immigrants, Africa, that he called Africans lazy people who rely on food and all that. He made a lot of statements that are anti-human. But that is not to rule the fact that he could change.

17th It is obvious that Trump is going to promulgate harsh policies.

18th Its a calling call, to African leaders, to make the country great. Its a calling call for us to fix our economy and stop going to the US for better living. According to his statements it is obvious he has Americans at heart. 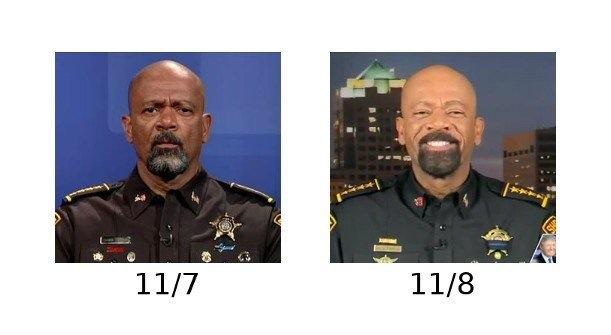