Is Trump about to help pardon Assange? (Snowden and maybe manning too ?)

posted on Nov, 10 2016 @ 02:12 AM
link
I do not know enough about Julian Assange's past deeds to make an informed opinion... However as far as I am concerned what Assange did for Trump's campaign should definitely be recognized and given at least an attaboy !

So what does ATS think about a pardon for Snowden, Assange, and throw in Chelsea Manning..?

I would bet it won't happen though for there are to many rotting in jail for doing much less....


It reads: “Julian Assange has been persecuted and harried by the very people he has sought to expose for their lies and deceptions against the people of the world.

“Mr Assange has shone a bright light on the corruption of those who presume to rule us.

“We believe Mr Assange must be granted a presidential pardon absolving him of any crimes alleged against him.

“He is a hero and must be honoured as such.”

It is unclear how supporters expect Trump to pardon Mr Assange, who is hiding from extradition from a European Arrest Warrant.

In a statement released yesterday, Mr Assange's organisation defended the release of the Clinton e-mails which came at a crucial point in the White House race.

Whistleblowers getting locked up or worse is insane and everything that's wrong wit the Ruling establishment.

I believe so yes.

I can see it happening.

It was Assange's releases that got Clinton pinned for all the lies she told over decades most likely.

Assange released dirt he had. He's done it before to a lot of countries. He releases the information along with analysis of the contents.

I don't believe for a second that he was trying to do Trump a favor.

He was more likely paid to do it than a 'favor'. You think he does this for fun?

posted on Nov, 10 2016 @ 02:33 AM
link
Assange and wikileaks is on recorded as saying they are neutral, it was simply that he had a ton of damning information that came to light about the current candidate and previous wrong doing in Government.

Had Trump had been a career politician there would have no doubt have been some dirt found in the leaks.

Personally if someone brings to light serious wrong doing as Manning and then Wikileaks did this should not come with the threat of prison, it is fairly well highlighted that the charges on Assange in Sweden where trumped up (sorry) and was always going to be used to get Assange to be brought to the US.

When you think of what we learned from these leaks and the BS that Governments get up to that many of us had a inkly about anyway but it was cemented with this information.

Trump does owe his election win partly to Assange but officially they will say it was not meant. That is if you do not believe that Assange has any help or affiliation to Russia as no doubt the whole situation has been a massive help to Russia having Trump elected and not Hillary..


What choice does anyone have . The free press is no longer free, the last investigative reporter left the day the music died, after Watergate. We only have leaked e mails to keep an eye on them, and they know it.


No, I think Bankers paid him. Donations? What a joke.

originally posted by: Ohanka
I truly hope so.

No if there are genuine claims these need to be addressed and either discredited or a full investigation needs to be done..

We are going to be holding the political elite to some fairly damning allegations in the coming years I think a proper investigation needs to sort the Assange situation out once and for all..

Do you have a reason to believe he was paid by bankers or is it just a suspicion?

This is also why it keeps it's finances completely secret. You know, clarity.

posted on Nov, 10 2016 @ 02:56 AM
link
Trump is the MIC/NSA candidate, the reason none of his Saudi/Russia dealings are leaked... Here is what to say about Snowden.
Also, he tweeted to boycott apple from an iPhone since apple won't help FBI to unlock the phone, Apple was firm on privacy issue and constitution. 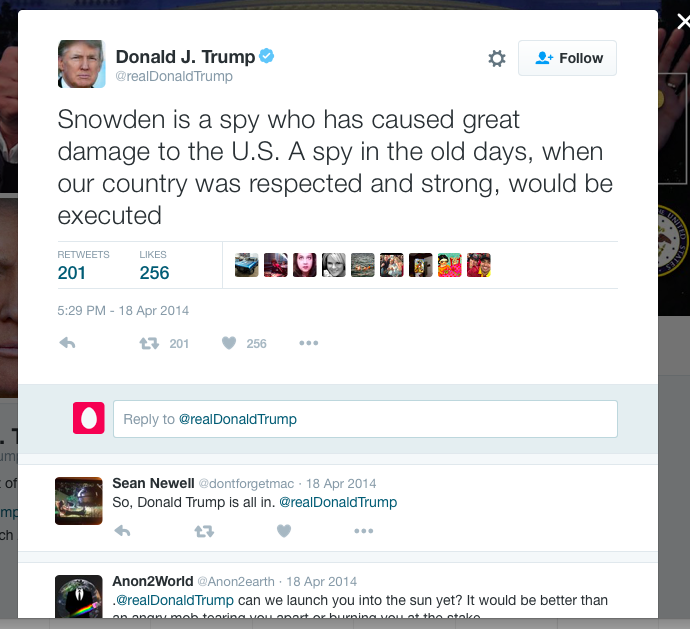 
I'm not talking about Donations. He's said himself half the company is privately financed. He's also said he doesn't pay himself with the donations or accept that money. So clearly he's well paid and connected. He also travels a lot, and having the access he has to all these Embassy's sure seems convenient.

He's run by a bank or a government. There would be no other explanation for his contributors to hide.
edit on 10-11-2016 by imjack because: (no reason given)

So he is being basically forced to stay in an embassy on trumped up chargers and you believe that if his backers were made public they would have nothing to worry about?
I think his life would be a whole lot simpler if he never posted. Again look at his history. In his latest interview he spoke about how hard it had been on his children. Look at some of the projects he has worked on, for example exposing the Icelandic banking system. I sure if he put his mind to it he could have started a tech company or 2.
edit on 10-11-2016 by ms898 because: Typo

Dude has had to beg the Ecuadorian embassy to let him stay there with asylum. It's a conditional stay.

"All these embassies". He went to the first place willing to take him where he could still do his thing. He's been holed up in that ONE embassy for 4 years now.