Should Hillary now be prosecuted for mishandling of classified information?

posted on Nov, 9 2016 @ 12:07 PM
link
There needs to be a special prosecutor andor a grand jury empaneled over the Investigation. Collusion, RICO, bribery, the entire gamut of crimes committed by Hillary, Comey, Abedin, Mills, Podesta, Bill, Lynch, and all the associated department heads and assistants involved.

Not lip service like when the Dems were elected. Actually use the powers granted to do the peoples works.

No, she needs to be admitted in a mental health facility.

posted on Nov, 9 2016 @ 12:09 PM
link
Presidential power to grant pardons, which is enumerated in Article II, Section 2 of the U.S. Constitution, is nearly unlimited and cannot be checked by any other branch of government. The pardons are not meant to correct a judicial error, such as a wrong conviction. Instead, pardons are intended for people who have atoned for their crimes and are thus being rewarded for good behavior, or for those who have completed their sentences. A pardon reinstates one's freedom to apply for certain jobs, such as in law enforcement, and exercise privileges, like carrying a gun or voting. All requests for executive clemency are directed to the Office of the Pardon Attorney at the Department of Justice. The Pardon Attorney investigates and reviews all applications before sending recommendations to the president.


I could be wrong, indeed I often am, but in passing, a couple days ago I thought I had read that Presidential Pardons ceased as an option on the date of the new President elect, ie. yesterday ?

If there were crimes committed in association with the Clinton Foundation, then go for it.


The Clinton Foundation had its fire sale, so in that Hillary's loss was
a win for The Crime Family....the last quarter of donations being
obscured today, probably will never transparently disclosed.

And in that sense, it is a loss for this country when political office
can be used to take in millions and billions of dollars, especially
from countries that sponsor terrorism.

I suspect that money flow to CF will subside, maybe they will
indeed continue to shutter it, but it should be investigated
in full.

posted on Nov, 9 2016 @ 12:11 PM
link
Yes she should. Firstly because he said he would do it and should keep his word and secondly and more importantly, to ram it home to all those elites and criminals that no body, but no body, is above the law.

originally posted by: Plotus
I could be wrong, indeed I often am, but in passing, a couple days ago I thought I had read that Presidential Pardons ceased as an option on the date of the new President elect, ie. yesterday ?

No, they can crank them out until the last second.

posted on Nov, 9 2016 @ 12:16 PM
link
"All requests for executive clemency are directed to the Office of the Pardon Attorney at the Department of Justice. The Pardon Attorney investigates and reviews all applications before sending recommendations to the president."

And perhaps this is different than a full-on Presidential pardon. Certainly there is a list that is examined for considerations ?

It is the same thing.

posted on Nov, 9 2016 @ 12:42 PM
link
Didn´t trump say she would go to jail, if he becomes POTUS?
So, if he breaks this promise(like many others he will have to break), many voters will be very unsatisified.
Funny times coming up(not for the average US citizens), i am happy that i don´t live in that US political mud pit!
It would be funny to see Hillary in jail, but it would be funny too, to see what happens after Trump has to break one after another of his promises he made, to fish for voters. How long will it take that this concerned and enraged voters will become enraged about his broken promises? When they realize that voted for an ultrarich puppet that only works for the rich. As Hillary would have done, too! And hoe enraged will they be?

I am hoarding popcorn and hot potatoe chips in masses, for the upcoming times that will hit the US now, to watch it from europe...

posted on Nov, 9 2016 @ 12:42 PM
link
You bet your arse she does. No one including Hillary Clinton is above the law, start looking for a way out Huma, and stay away from any city bus stops.

posted on Nov, 9 2016 @ 12:43 PM
link
Yes she should be, anyone else would have already been in prison and anyone that had a part of it, why should she be any different. lock her and all those involved up! she did wrong and she knew she did wrong, she just don't care!


Didn´t trump say she would go to jail, if he becomes POTUS?

no he didn't, what he said was he would have his Attorney Genreal appoint a special prosecutor to investigate the emails.
then she responded and tried to make a joke at the end of here response and he shut her down with you'd be in jail.

it's all out there on video, for those with ears to hear.

In a certain respect you are correct in your statement.
But you will see no charges or indictments issued prior to the inauguration of the 45th President of the United States of America.
Therefore the Presidential pardon process is moot.

Let just say that Evergreen needs to have a very good defense counsel.

Every time she sees or hears anything political, she will be reminded of her own lies.

Let her suffer in public and in private.

She never did apologize for lying to the people.

She never did apologize for lying to the people.


I suspect she has no regrets in that regard, the height
of arrogance and deceit.

She indeed was a weak, conniving liar. A horrible example
for young women, thankfully she was not rewarded with the prize.

originally posted by: RickinVa
Absolutely not.


No point in it at this time, just let it go and move on.

Right, let's all forget the crimes that were committed.

Hillary should be prosecuted to the full extent of the law.

Bill should also be prosecuted for all the millions he swindled through his Foundation, or else this will happen: 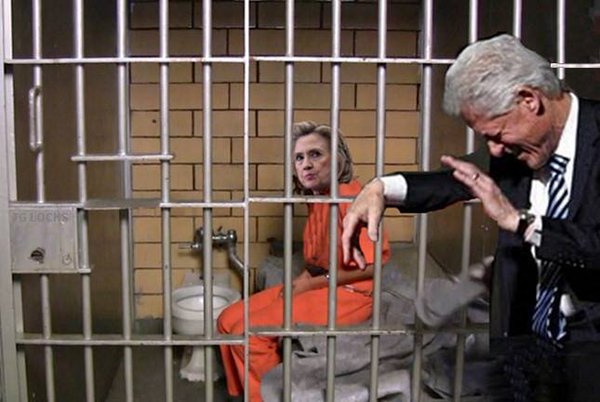 Is she above the rule of law ?
Your too stupid for words.