Donald Trump is moving to the White House and Liberals put him there.

page: 1
24
<<   2  3 >>
log in
join
share:
rexsblues
+3 more
posted on Nov, 9 2016 @ 07:51 AM
link
Thomas Frank for 'The Guardian' posted this article earlier this morning and it's nothing short of the liberal squeeling temper tantrum that we're all about to hear a lot more of from around the country and world. Just listen to this blowhard whine and moan...


A month ago I tried to write a column proposing mean nicknames for president-elect Donald Trump, on the basis that it would be funny to turn the tables on him for the cruel diminutives he applied to others. I couldn’t pull it off. There is a darkness about Trump that negates that sort of humor: a folly so bewildering, an incompetence so profound that no insult could plumb its depths.

He has run one of the lousiest presidential campaigns ever. In saying so I am not referring to his much-criticized business practices or his vulgar remarks about women. I mean this in a purely technical sense: this man fractured his own party. His convention was a fiasco. He had no ground game to speak of. The list of celebrities and pundits and surrogates taking his side on the campaign trail was extremely short. He needlessly offended countless groups of people: women, Hispanics, Muslims, the handicapped, mothers of crying babies, the Bush family, and George Will-style conservatives, among others. He even lost Glenn Beck, for pete’s sake.

And now he is going to be president of the United States. The woman we were constantly assured was the best-qualified candidate of all time has lost to the least qualified candidate of all time. Everyone who was anyone rallied around her, and it didn’t make any difference. The man too incompetent to insult is now going to sit in the Oval Office, whence he will hand down his beauty-contest verdicts on the grandees and sages of the old order.

Maybe there is a bright side to a Trump victory. After all, there was a reason that tens of millions of good people voted for him yesterday, and maybe he will live up to their high regard for him. He has pledged to “drain the swamp” of DC corruption, and maybe he will sincerely tackle that task. He has promised to renegotiate Nafta, and maybe that, too, will finally come to pass. Maybe he’ll win so much for us (as he once predicted in a campaign speech) that we’ll get sick of winning.

But let’s not deceive ourselves. We aren’t going to win anything. What happened on Tuesday is a disaster, both for liberalism and for the world. As President Trump goes about settling scores with his former rivals, picking fights with other countries, and unleashing his special deportation police on this group and that, we will all soon have cause to regret his ascension to the presidential throne.

What we need to focus on now is the obvious question: what the hell went wrong? What species of cluelessness guided our Democratic leaders as they went about losing what they told us was the most important election of our lifetimes?


Donald Trump is moving to the White House, and liberals put him there
...At least he got the title right.

Again, this IS why Trump won... 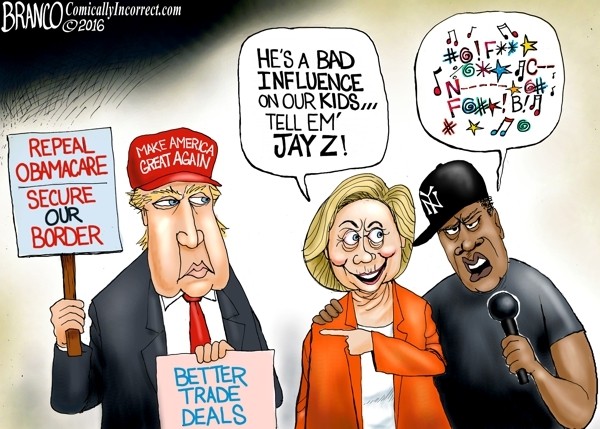 (if your a liberal, please stare at this until it makes sense.)

Liberals, That is actually a true story, look it up.

You know, it is interesting seeing how well the whole Trump/Clinton psy-op worked on the masses.

The picture that you put up is worth considering. It is quite painful to realize just how terrible this elite "sElection" cycle has been. I have been of the opinion that they both serve the same masters.

The social engineers are quite brilliant with their various approaches to manipulating the minds minds of their subjects. They set up traps, always a few steps ahead, simply the nature of planning on slow incremental changes.

This time around I do believe they planned on a Clinton Presidency, right up until the Podesta email leaks began, then everything changed.

As we have begun to see the true satanic elite and their inner communications, those in power understood that Hillary has become far to implicated in all of this and it is time to go to Plan B, time to give Trump the presidency and I am willing to bet we are about to witness a fair amount of high level arrests.

Either way I am still laughing my ass off about there not being a Hillary presidency!

posted on Nov, 9 2016 @ 08:08 AM
link
The whining and crying that Liberals are doing now, is the very reason Trump won. We were sick of hearing that if you didn't bow to the "Cause of the Day" crowd, you are a racist, bigot.....well, you know them all. Liberals thought that they could bully and shame their way in to power and they just found out how wrong they were.

I can't honestly call these people liberal, as I identify with classic liberal values.. They are vile SJWs progressives that attempted to destroy our country but now their ideology is in a death spiral, let it go down in the history books as one of the ugliest and scariest things that ALMOST happened to the free world

Realistically speaking, the only reason that Mr Trump is finding himself the winner of this election, is because Hillary Rodham Clinton should never have been in it, because she was poison, known to be, throughout the entire Obama Presidency. Shes been a staunch supporter of the military industrial complex, which no thinking people can support. Shes been intensely supportive of the intelligence services and their habit of invading the privacy of every American, without warrant or probable cause. Shes been seen laughing at the bayonet sodomy death of world leaders, lying to the people repeatedly during her time in office, about all manner of things, and there was never going to be a day where she could win a presidential race, precisely because people knew what she was like and what she is about.

Then you have all her business connections, her influence peddling, the very muck that people have no time for, all of which was pretty damned obvious to astute observers for years, but really hit the headlines more recently.

There are two things that the liberal left should never have done. They never should have compromised and shifted to the centre, and the DNC should never, and I mean NEVER have permitted Bernie to get boned the way they did. I do not think there is any doubt at all, that if the choice had been between Bernie and Donald, that the result would have gone the same way. Not in a month of Sundays, not in a year of them.

Its true that the liberal media and the DNC are the architects of this mess. I would be the first to agree, because Trump may have won the election, but the argument? Not really.

no the reason he won is because AMERICA CANNOT STAND THE VILE SJW BULL# THAT YOU AND OTHERS EXPOSE. Anyway respect brother hopefully your idea's change

posted on Nov, 9 2016 @ 08:23 AM
link
The MSM and the ruling class thought they could just anoint Hillary president, and that was it. It's like a repeat of the 2000 election, but without the hanging chads. Back then, the Dems similarly thought they could pick their dream candidate (Al Gore), never mind the fact that nobody liked him, and ram it down our throats.

Also, I'm kinda thinking we shouldn't call them "liberals" anymore, because these days the liberals are the establishment.
edit on 9-11-2016 by AndyFromMichigan because: (no reason given)

What do I believe, that millions of free thinking, deprogrammed people do not? What is it about my views you think is in direct opposition to yours? I would love to know.

For the life of me I stress that extreme liberal actions put Trump in the White House. The pendulum has swung, the balance made. I do hope they take a good look at themselves and come to the realization that without their authoritarian actions, Trump would have never made it through the primaries.

Thanks for the read...I think.

Just so glad Hillary did not win.

posted on Nov, 9 2016 @ 08:27 AM
link
a reply to: elementalgrove
you know, at first I thought Trump just might be the conspiratorial 'red herring' a lot of folks had speculated... and I'll admit, that notion still haunts me, but for the sake of the common ideology in societal reality, I'll pretend the illusion is legit.
edit on 9-11-2016 by rexsblues because: (no reason given)

The DNC stabs its own in the back. That's why I left the party eight years ago.

Bernie voters were not enthused enough to go vote for Hillary and who can blame them?

posted on Nov, 9 2016 @ 08:31 AM
link
a reply to: TrueBrit
I agree with you that the main reason Trump won is how bad Hillary was. However, why did Trump win the primary in the first place?

I think that the direction the country has taken over the past 20 years has a lot to do with that. People were fed up with politicians ignoring them. Bush didn't care about the little guy, neither did Obama. And people have wanted change for so long, they became desperate.

And so Trump arose as a voice for those angry people. Instead of the democrats or Hillary trying to speak to these people, they mocked them, called them irredeemable and racist, and so forth. This is why the democrats are responsible for Trumps victory.

one word Islam and it's deplorable ideology we could start there

You're right. They don't even come close. They were so fond of calling Trump "Hitler", but they themselves shouted down or tried to intimidate any opposition. They went after anyone who disagreed, with name calling, attacking them on social media and even going so far as trying to get them fired from their jobs. How could they not see they were the very thing they claimed to hate?
I consider myself a Liberal....as long as we stick to the classic definition.


Classical liberalism is a political ideology that values the freedom of individuals — including the freedom of religion, speech, press, assembly, and markets — as well as limited government.

originally posted by: TrueBrit
a reply to: rexsblues
There are two things that the liberal left should never have done. They never should have compromised and shifted to the centre, and the DNC should never, and I mean NEVER have permitted Bernie to get boned the way they did. I do not think there is any doubt at all, that if the choice had been between Bernie and Donald, that the result would have gone the same way. Not in a month of Sundays, not in a year of them.

Its true that the liberal media and the DNC are the architects of this mess. I would be the first to agree, because Trump may have won the election, but the argument? Not really.


Spot on Brit, that's just a perfect example of how rabid their narcissism is, they can't even realize or understand that they shot themselves in foot so many times, ruining any decent chance they really had. But I disagree on the Bernie 'what if' outcome, I've read a couple other UK articles making the same piont this morning, but the truth is Bernie's radical hyper-socialist rhetoric would've done him in, in the same liberal way I just mentioned, long before election day. Bernie was simply to unrealistic and delusionally senile for any American to take seriously.
edit on 9-11-2016 by rexsblues because: (no reason given)