posted on Nov, 8 2016 @ 11:20 PM
link
What a great investment the Madam President Issue of Newsweek will be in the future. It will be almost as good as the Dewey Wins Headline.

Look I am not happy about Trump winning, but I am thrilled that Hillary and the Elitist a-holes lost. My entire outlook for the next four years has changed. We can probably resolve WWIII over beers between Trump and Putin and my gun rights should be safe for another four years.

I am still concerned that the Elites will turn Trump into the next JFK if he tries to fix anything. I am also worried that they will intentionally tank the Economy on Trump. We have a lot more challenges coming, but at least things have a CHANCE to be better.

Trump isn't the best man for the job, but Hillary was even worse. Let's try to get our freedom back together and give the guy an opportunity.

Things now have a chance to be better.

Most entertaining election in years.

If the Republicans keep the Senate we might get rid of Obama care too. I can't wait to see the media try to defend that pile of garbage when the time comes.
edit on 2016/11/8 by Metallicus because: (no reason given)

Can you buy it yet? 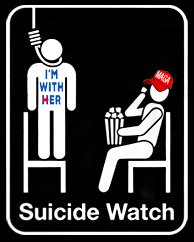 originally posted by: projectvxn
Most entertaining election in years.

Absolutely agree; but with all the gloating going on here, I'm kind of hoping Clinton pulls out an overnight victory.

And it makes me really uncomfortable.

You will probably have to bribe a clerk somewhere. I doubt Newsweek wants these issues out and them looking like the MSM idiots they are.

After all the threads about polls showing Clinton up 20 pts I think we deserve a night. Like I said this is more about my hatred of Clinton and the arrogance of her and her minions than any love I have for Trump.

originally posted by: Metallicus
a reply to: eNumbra

After all the threads about polls showing Clinton up 20 pts I think we deserve a night.

You guys had daily wikileaks dumps and all last week was dominated by the elite pedo-pizza conspiracy.

I think this election has seen enough negativity and everyone needs to grow up and be humble if for one night.

originally posted by: Metallicus
a reply to: projectvxn

If the Republicans keep the Senate we might get rid of Obama care too. I can't wait to see the media try to defend that pile of garbage when the time comes.

This is where the rubber meets the road. It is a clear repudiation of the Obama administration.

All I can say is there better be substantive measurable results ASAP. Without the complete reversal of those policies, we cannot recover.