As of 10 minutes ago they only had 1% of the vote tallied in Florida so I don't see how anyone can say he's already won that state. It's still anyone's game at this point. Trump DID win my state of Kentucky and our neighbor Indiana but as far as the rest- who knows?

Who knows indeed. Either way, your avatar is amazing

originally posted by: Lucid Lunacy
a reply to: NoCorruptionAllowed

I've also heard from Trump supporters that Hillary pamphlets are being handed out at polling places everywhere. I have yet to see that claim proven. I keep seeing claims.

Yeah, the votes being changed to Hilary isn't just a bunch of people making stuff up. It has been reported in the dreaded MSM

Officals need to "re calibrate" machines

There's also reports in Texas, with one county going as far as to drop the machines all together and use paper ballots for the whole county.

originally posted by: Lucid Lunacy
a reply to: CharlesT

Changing as you refresh.

States are often called at 1-2% counted, but not at 100% accuracy. Indiana, West Virginia, and Kentucky have already been called for Trump.

The states to pay attention to tonight though are Florida, Ohio, North Carolina, and Michigan. If Trump loses any of those 4 you can expect Hillary to take it. If Trump gets all 4, you'll need to stay up a couple hours later to find out.

Edit: I should also mention that if Trump can flip Pennsylvania that gives him some leeway elsewhere.
edit on 8-11-2016 by Aazadan because: (no reason given)

originally posted by: Macenroe82
Oh this is an exciting election!
A real nail biter. I know, i know, i know its way to early still but seeing the openeing numbers with Trumps large leads...i hope it continues this way all night

Nothing odd going on it's all legit.

Election judges in Clinton Township, Butler County confirmed there were issues with two of their eight automated voting machines. Most of the issues came when people tried to vote straight party ticket.


Suggesting it occurred for both party lines.

“In each of those cases, there has been no evidence that the machines are working incorrectly. This includes reports in Robinson, West Deer, Hampton, and Sewickley Hills…In every election there are machines that need to be re-calibrated following transport. So far today, we have reset three machines — one each in Upper St. Clair, Monroeville, and West Mifflin. This is in line with what we see in each election.”

He says in all cases votes ended up being recorded correctly.

Your source says that there were 2 instances in Butler County where problems occurred when people were voting straight party line. It says some machines need to be recalibrated for transport, that this is normal every election, and that the votes are being recorded correctly.
edit on 8-11-2016 by Lucid Lunacy because: (no reason given) 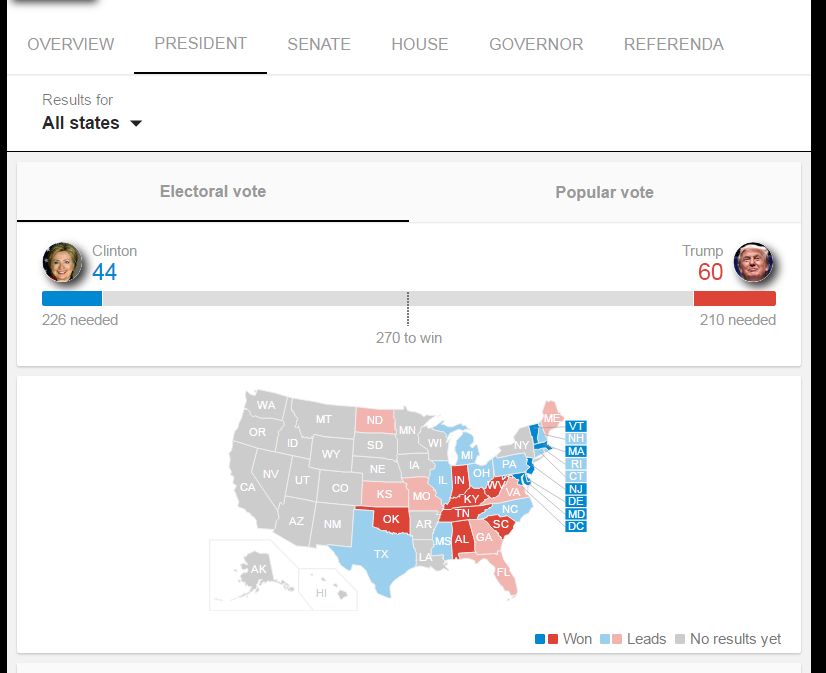 I don't think you know what winning means. Getting the states you're supposed to get doesn't make you the winner, when you need to take some swing states to win.

From that map of yours you posted he's actually losing based on what it shows because it has him missing in Ohio when he has to run the table on swing states to reach 270.

I don't think you know what winning means.

Try this link, you can zoom in on the map to see how each county is looking.
There is a lot of red.

originally posted by: trollz
So 60 electoral votes to Hillary's 44 isn't winning? He even has way more raw votes, 13.3 million to her 11.9 million.

No, 60-44 doesn't mean he's winning now, because pacing isn't related to winning. That 60 also involves giving him several states before the votes were even counted because they lean so far in his direction. Oklahoma, West Virginia, and Georgia to name three.