Some weird coincidences regarding the election

posted on Nov, 7 2016 @ 11:49 PM
link
It’s late here, but I thought ATS would enjoy some doom and gloom. Basically, the Sun got mad and took a swing at us on Nov. 5th and we're about to finally feel the blow on Nov. 8th. It may just be a slap on the cheek or quite possibly, a warning of bigger things to come. 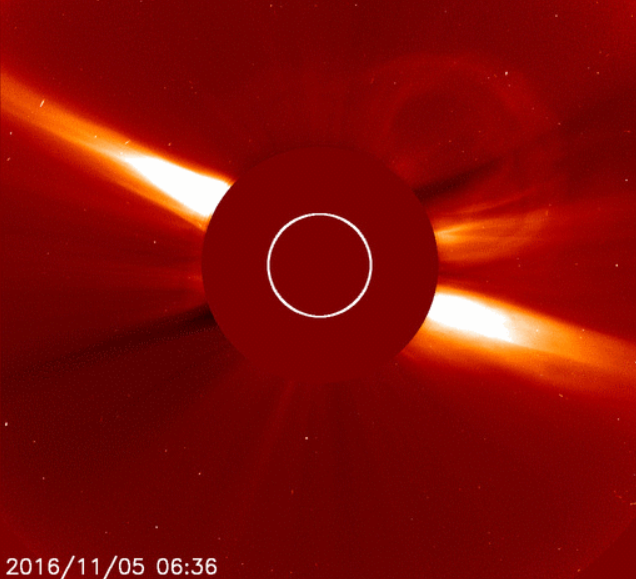 A G1 (Minor) geomagnetic storm watch is in effect for the 8 November, 2016 UTC-day. SWPC forecasters determined that an asymmetric, partial halo CME which occurred on 5 November in association with a disappearing solar filament, is anticipated to provide a glancing blow to Earth's magnetic field mid to late day on 8 November. 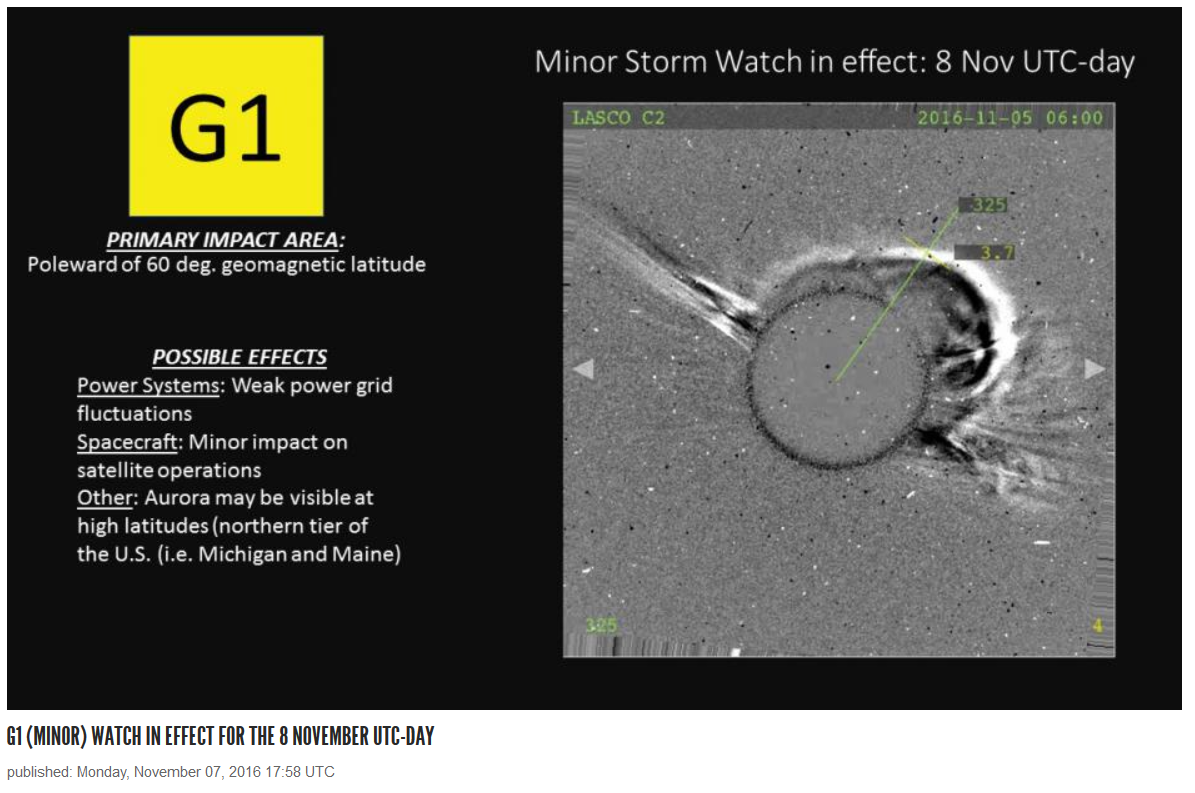 The glancing blow CME is likely to cause an isolated period of G1 storming conditions later in the day. Please continue to visit our SWPC website for the latest information, forecasts and updates.

Not to politicize the Sun's fury, but I could see the storm being used to blame any “glitches” that occur during the voting process. We’ve got hackers, Russian hackers, hidden coding, GOP sabotage and now a freak'n geomagnetic storm. What's next?

Take a look at this strange coincidence that I found…

CME Group Inc took emergency action on Monday to allow bigger-than-normal price swings in its interest rate futures on Election Day on Tuesday, as the market operator warned that the U.S. presidential vote could increase volatility.


Pretty weird that the CME (Coronal Mass Ejection) Group is in charge of such a threat. That's not what it really stands for, but hopefully you get the point. Is this a secret warning towards the end of the article?

"The emergency action is being taken as a precautionary measure and is intended to ensure fair and orderly trading," it said. The lower limits normally in place for overnight trading are set to apply again starting at 5 p.m. Central on Wednesday (2300 GMT), CME said.

What makes this timing even more unsettling is the fact that just weeks ago, Obama signed a brand new executive order on October 13, 2016 specifically regarding Department of Energy, Department of Defense, and Homeland Security coordination in handling “space weather events.”


Recently, Homeland Security was talking about taking over the elections as a matter of national security…

“We should carefully consider whether our election system, our election process, is critical infrastructure like the financial sector, like the power grid,” Homeland Security Secretary Jeh Johnson said.

Speaking of "final days," check this out...

Sun, moon and Earth align for stunning supermoon finale to 2016

On the same date, the supposed "Battle of Armageddon" began.

Like Judaism and Christianity – and strongly influenced by them – Islam has a powerful eschatological strain. It anticipates the end of the world and a final historical confrontation between good and evil, after which human life is set to be miraculously transformed.

And according to one reading of Islamic tradition (hadith), the place where this final malahim (apocalypse) will happen is – of all places – Dabiq. This is where the Muslim and Christian armies will finally face each other and the Crusaders will be destroyed. And this is why Dabiq is the name on the lips of Isis recruiting sergeants.


Can the UN Avert the War of Armageddon?

An excerpt from the Honorable Minister Farrakhan’s historic World Day of Atonement address at the United Nations Plaza on October 16, 1996, the first anniversary of the Million Man March, where he addressed the topic of Armageddon, and warned that actions of nations are moving them toward that fateful battle.


This is pretty funny though...

“The inevitable defeat of the Islamic State at Dabiq, should it ever confront “Rome,” would … argue against the prophecy’s applicability,” wrote Will McCants, a senior fellow at the Brookings Institution who studies Middle East policy, in a piece for the institution’s blog. “But in the apocalyptic imagination, inconvenient facts rarely impede the glorious march to the end of the world.” 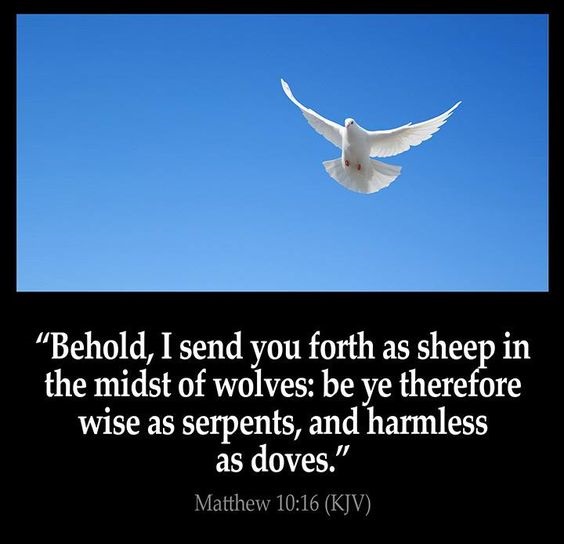 November’s date is expected to reach “extra-supermoon” status as it becomes a full moon within about two hours of perigee, making it the closest full moon of the 21st century.

I found this odd, which happened on the same day in history...

1881 Charles J. Guiteau put on trial for the assassination of US President Garfield


This could mean nothing, but felt it was interesting enough to add.

Anyway, if you can find anything else strange, be my guest and speculate until you get dizzy. I'm just casually laying this out there for anyone who may find it interesting.

There is no such thing as coincidence.😉

posted on Nov, 8 2016 @ 12:04 AM
link
I think this series of coincidences that you've gathered and illustrated are really very interesting, and I will certainly think about them if anything pops up tomorrow. Cliff High said that his forecast for 9 November showed the US in a state of 'confusion', which also kind of fits in with an unexpected event. I think that Oct 13 date was interesting too... very Illuminati. Add a little solar wind and we have quite a recipe boiling up.


Not to politicize the Sun's fury, but I could see the storm being used to blame any “glitches” that occur during the voting process. We’ve got hackers, Russian hackers, hidden coding, GOP sabotage and now... a geomagnetic storm. What's next?

Why, geomagnetic hackers, sabotaging Russians and GOPs, or something.....
lol
tetra

originally posted by: JinMI
a reply to: eisegesis

I hear it's pulling ahead in the polls!

It's the Clump everyone's hoping for!

Add to that growing collection, us sf on ground in Syria...

Also, they say G1, but hey, watch them polls closely. That G1 suddenly becomes a hack or a much larger surge and boom. Things come back up annnnd polls are significantly different.


Trump supporters saying the Sun is a paid shill of Hillary

originally posted by: JinMI
a reply to: eisegesis