posted on Nov, 6 2016 @ 01:04 PM
link
My brother is a vendor at a flea market and he has a case that the lights will always turn on. I will watch his booth for him Sunday mornings while he goes to church and one Saturday he was sick, so I watched his stuff for him that day. I came in as usual and the lights were on. I didn’t think anything of it, I just figured he forgot to turn them off. I made sure to turn them off at the end of the day. The next morning when I came in, they were on again. I asked the guy who runs the market if he turned them on, he said, “No, his booth is haunted.” I thought he was joking and he told me that it does that all the time, and they figured something in the case must not like the dark. He works at another business in the same building so he comes in the marketplace sometimes, and he says he’ll see the lights on after he turns them off multiple times.

Oh also, we tested it. We took it out of the case and put it under a light that is always left on to see if it was the duck or not. For the three days it wasn’t in the case, the case lights stayed off.
The reason we thought it might be the duck, was because my brother, the guy that runs the place, and I all had a feeling it was the duck, as opposed to any other thing in the case.

One of the security videos was posted on the market’s facebook page, and a psychic saw it and asked if she could come in and see it. She said she definitely felt it and sensed a presence. She asked it some questions, and whatever. Her brother is a paranormal investigator and she said she will definitely tell him there’s something here to be investigated.

It’s all very interesting to me, and I actually feel a bit sorry for it. I feel maybe a kid who had it died and it’s attached to it and it doesn’t like the dark. Oh also, the duck used to have little light bulbs for eyes. 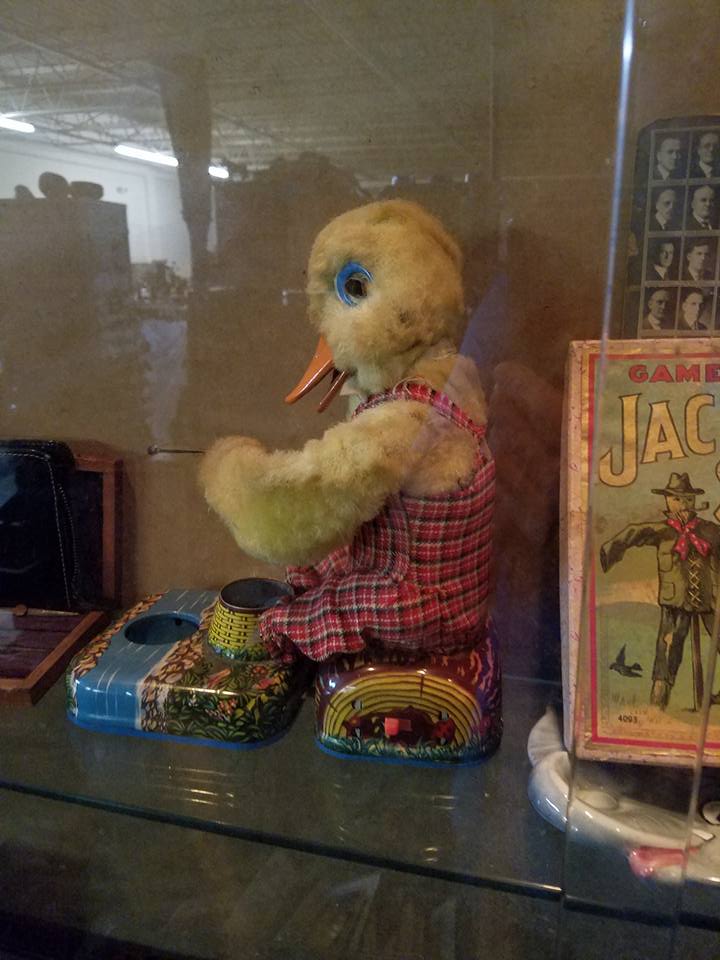 posted on Nov, 6 2016 @ 01:07 PM
link
Twelve gauge pump shotgun with birdshot and seven shells and that toy will never give anyone trouble again. Threaten the toy, it will settle down.

originally posted by: rickymouse
Twelve gauge pump shotgun with birdshot and seven shells and that toy will never give anyone trouble again. Threaten the toy, it will settle down.

Sounds funny and all that, but people have responded that way to other hauntings, and wound up becoming quite sorry they did. Things can turn ugly real fast by doing something like that, and then the people who respond badly like that become the "item" the troubled spirit is attached to, and attached in a bad way.

That is why you use a remote way of destroying it, shoot it from twenty feet away and do not go pick it up for a while. Maybe it will jump into a dog and the dog will come and look for you.

posted on Nov, 6 2016 @ 01:28 PM
link
I'll buy it. I have a Duckie Bathroom full of ducks from all over the world. There are about 200 physical ducks and 200 pictures. Your duck will have a comfortable home and lots of company.

Hi Ellie,
Do you have links for the video footage?
cheers
G

How nice of you. However, someone just bought it.... the guy that runs the place. He wants to have it in it's own lighted display.

S&F for an interesting read. I hope you'll post updates!

I thought i could upload them to the thread somehow. Do I have to have them on another site to link them here?

originally posted by: Ellie Sagan
a reply to: Gordi The Drummer

I thought i could upload them to the thread somehow. Do I have to have them on another site to link them here?

originally posted by: schuyler
I'll buy it. I have a Duckie Bathroom full of ducks from all over the world. There are about 200 physical ducks and 200 pictures. Your duck will have a comfortable home and lots of company.


I can no longer view you the same (mind's eye), after reading that, lol.

Is this your house? 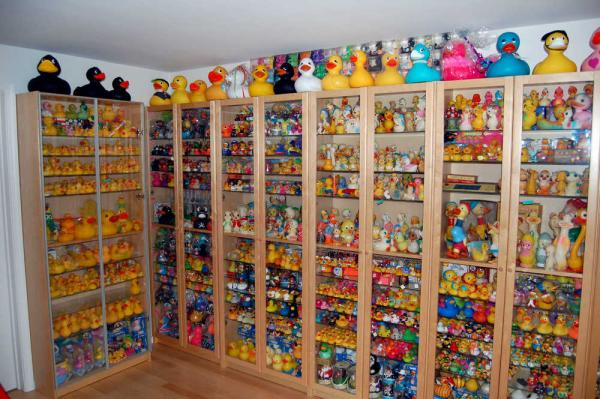 You learn something new everyday!

I'm at the market now, and there is a vendor I was chatting with, and she said, "What is story with duck or something?" (She has a heavy Romanian accent, so cute haha) So I told her the story and she said, "No, is short or something." I said, it can't be because if it was a short, wouldn't they go off at various times also? But also , the fact that the camera is activated (heat motion activated) a few seconds before the light goes on. I even showed her my videos of it.

She asked me to turn them off again. I said ok figuring she wanted to see it herself. Then she said maybe they go on if someone heavy walks by. To prove to her that vibrations wouldn't do it, I jumped up and down as hard as I could and they didn't go on.

Then I left them off to see if they would go back on again. We both walked away, she went in another booth to shop, and I left the room to go to the restroom (I asked another vendor to watch my stuff). When I came back , they were on the lowest setting. So I of course yelled at her to come look. She still doesn't believe. (We are slow at the moment so there is only a couple customers in the building, and no one was in the booth with the case).

So I turned them up to the higher setting and now one light is blown out. Not in the case with the duck though.

I am very interested in ghost activity because I've encountered a lot of it, especially recently.

Maybe I should make a thread dedicated to sharing several of my stories, most are short and sweet. Some are a little long because there's a lot to describe.

I have dug into the subject deeply for a long time, and I am convinced there is a high probability that certain items can become vessels for Spirits and exhibit anomalous activity in their vicinity. I've seen some compelling evidence that appears genuine. Haunted dolls are especially freaky. I would classify that duck as a doll.

I've actually experienced ghost activity directly, fully sober and sometimes with full focus on the event, though usually it's a periphery event. So I know this phenomena has something to it.

I've also delved into some occult methodology and even developed my own approaches, and have some very anomalous activity with it that is exceptionally compelling. I'll confess I'm completely convinced and I also think it's repeatable and testable.

I have a lot of theories about what might be the cause of these effects, of which only one of those theories is disembodied spirits of deceased invididuals. There are many alternative explanations however.

I have experienced many paranormal things myself, from the time I was a young child. It waxes and wanes in frequency. This duck doesn't feel scary at all to me. I actually said "bye" to it yesterday when I left. It happened again. The lights were off and a few of us were standing around chatting before leaving. The light went back on while we were standing there!

posted on Dec, 4 2016 @ 10:39 AM
link
Yesterday it was on lowest setting when my brother came in, so he just turned them up to the brightest setting as usual. When I came in they were off, so I asked him if he wanted them off. He said no, they were on. So I turned them back on. A little later, they turned down to the lowest setting. So it feels like it's playing games now.

There's another security camera video showing the lights going on ever so slightly, then turning on. There seems to be movement in a couple areas around the camera. Like in the foreground, it's a rack of coats that seems to be moving a little. Also the wall above the case it looks like the shadows are moving. This was about 4 am this morning. No one was in the building.