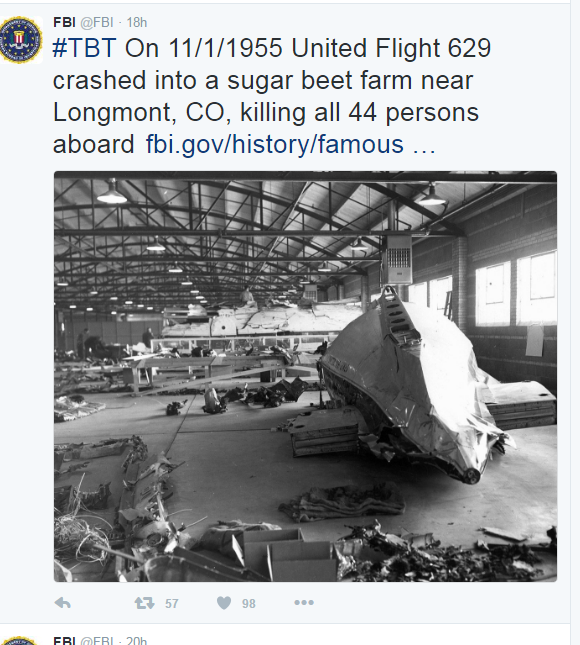 I couldn't help but think it was some kind of code, so I started playing around with it and to my surprise it actually transcribed in to something.

If we just take the numbers in the post they are 11/1/1955 629 44. When using their corresponding letters that spells out


Does this mean All Available Agents See FBI Deputy Director?

But who is KA?


The first scenario would surely correspond with the rumors that all available agents are being called in: truepundit.com...

Anyway I just thought this was interesting.....

I'd like to address some of the biggest objections and give you my take on it.

I agree that the code would be ridiculously easy, but this could also be away to easily get a message out while keeping it out of the press. I mean what reputable news outlet is going to report on something like this?

Plus I also think the FBI is trying to get messages out to the public, an easy substitution code is practically guaranteed to be broken but still keep it out of the press as long as it's not confirmed by the FBI themselves.

2) They wouldn't use a twitter, they'd get the message out using their internal protocol.

Maybe they'd use twitter for two reasons: 1) Two make the message public and easily accessible. This way undercover agents or agents who are hard to contact can easily see the message without having to make actual contact. 2) Perhaps they thought their internal protocol was compromised and therefore needed something something that was not.

Who knows...I just can't help but think that a weird twee that literally spells out the words SEE FBI in the middle of is too much to be just a coincidence with everything that's going on right now.
edit on 4-11-2016 by stdscf12 because: add info

Interesting... Or maybe it's just a harmless tbt?

Talk about code , check this out

Yeah but it's that's such a random tweet in the middle of all of this craziness and the fact that it clearly spells out SEE FBI with all of the rumors surrounding all agents being called i think is too strange to be a coincidence.


"Be sure to drink your Ovaltine."

Yeah, that part got me.. Although who is KA and who is DD?

Seems to me that the FBI would have better ways to have a recall
of their agents than posting something that very blatantly says "seefbi" on an official Twitter account.
Even a simple low tech telephone pyramid like we used to use in the military would suffice and avoid too much public attention. A bit cumbersome but still effective.
Unless, of course they were trying to subtly alert the public without alerting the public, if you will.
Just a thought.

And if this was tweeted today.. Surly they would have thought to post it Nov 1.. rather than Nov 4th.. it would just make more sense. Unless they were just itching to get the #TBT.
edit on 4-11-2016 by DeadCat because: (no reason given)

Have they done this on their tweet feed before?

If not, I'd say it's definitely a coded message of some sort to someone(s) from someone within the FBI...

Interesting and no shadowy unknown source needed to be quoted for it. Getting a little tired of those...

"Does this mean All Available Agents See FBI Deputy Director?"


Yes, you are absolutely correct. This was code for all available special field agents to come in for what I can only assume is a briefing about taking out the trash. Using codes hidden in plain site is pretty standard when you need to call people in, especially people working under cover. Heads are going to roll and it's about Damn time.

I highly doubt that it would be physically possible for all available agents to see the deputy director at the same time, or on the same day, even in batches. Its not like there are only five or six of them.
edit on 4-11-2016 by TrueBrit because: grammatical error removed.

posted on Nov, 4 2016 @ 11:28 AM
link
It means for everyone to get back to base for a briefing, in masse. The're not going to sit each agent down individually, come on. I think you'd be very surprised how quickly all of those field agents could make it back to HQ. FBI field agents are bad ass very highly trained folks, no slackers and @$$ dragging allowed.
edit on 4-11-2016 by 191stMIDET because: (no reason given)

originally posted by: bender151
a reply to: stdscf12

And what have you found and shared with us that's interesting?

Yeah, that's what I thought.

Read the story associated with flight 629.

And you're not the only one who thinks they are saying something coded: www.reddit.com...
edit on 4-11-2016 by DeadCat because: (no reason given)

And that not every agent is on Twitter? Also understood, right?

So the easiest method to get a hold of a large number of agents in a hurry is a telephone tree (insider tip: that's exactly what they use) and not a Tweet with an elementary level subsititution code.

Is it a call to Denver agents to report in? Could it be "C" UFO in Colorado? Maybe I am being silly! There is no such things as flying aircraft that do not use jet engines, hover silently, are shaped like black Doritos...

Yeah, that part got me.. Although who is KA and who is DD?