The New York Times featured a photo of Hillary Clinton being welcomed to an early voting site in Pompano Beach, Florida on Sunday. Apparently, she didn't stay too long at her rally location at the Pompano Beach Amphitheater. Clinton almost melted at the sight of Trump signs surrounding her and people yelling "Lock Her Up!". A police escort shared what happened: 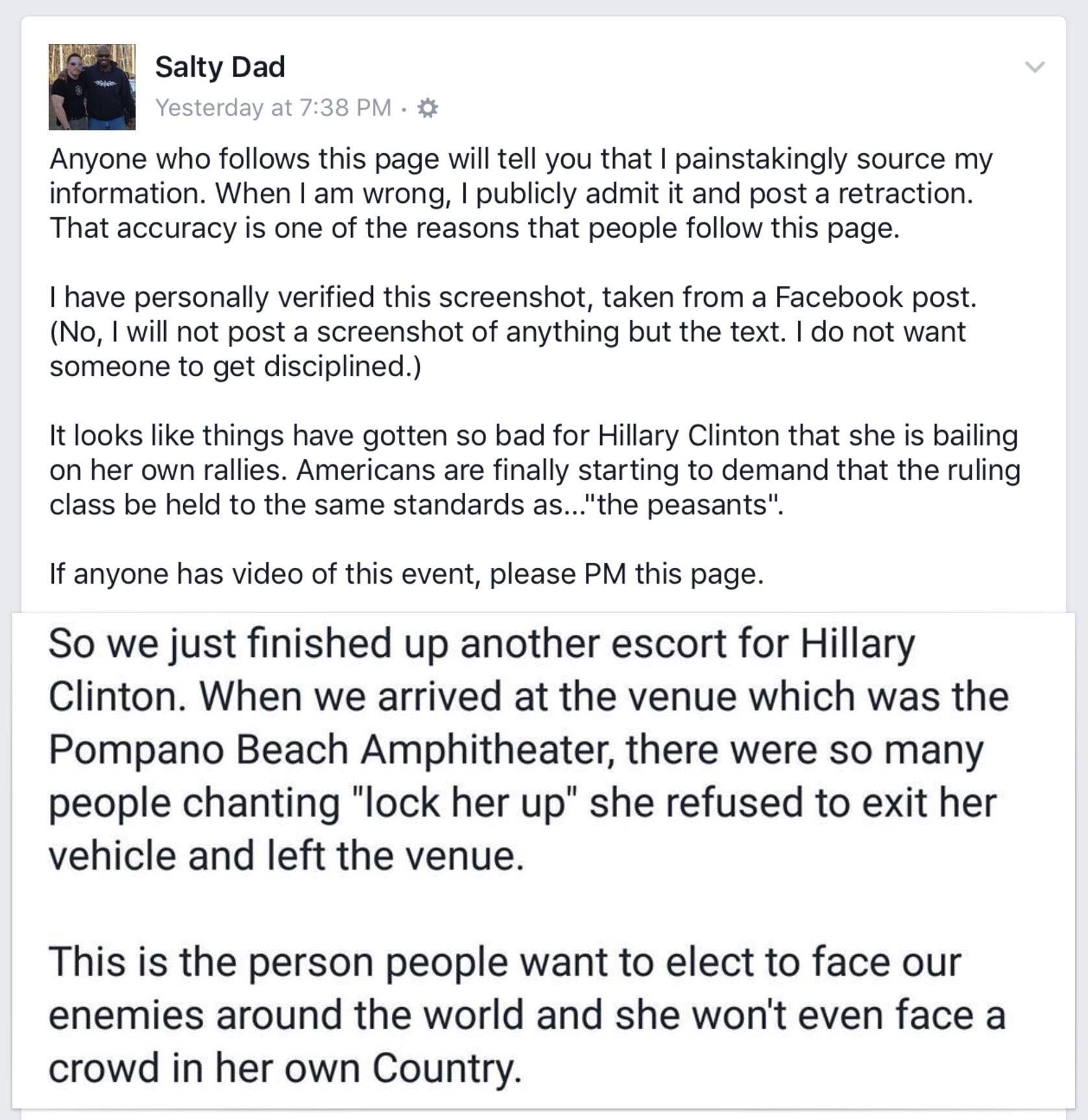 I find it amazing how bold these Trump Supporters are and how quickly it is trending.

posted on Nov, 1 2016 @ 06:42 PM
link
On Frontline PBS they said when she was First Lady and started giving public speeches on her healthcare reform people were spitting in her face and throwing stuff at her and her limo. That was the first I heard of that, likely because I was just a kid.

No wonder she thinks Republicans are deplorable. They spit in her face literally. And that was not some fake outcry like she created at Trump rallies. That was the real deal. People were pissed.

And the pace of her unraveling/undoing continues to accelerate.

It has become exponential now.

I firmly believe that one way or another - she will be out of the election race by Friday.

Maybe sooner at this pace...


Remember the Sunday morning campaigning at a bar? That was Florida.
edit on 1-11-2016 by Khaleesi because: (no reason given)

I hope it continues when Hillary, the cowardly lying cheater, becomes president.

Well thats good. This didn't happen yesterday or today. My sources say Sunday as posted in the OP. Must had happened after she left the bar

Hillary Clinton Campaigns at Bar, In Florida, Mid Morning, On Sunday
www.thegatewaypundit.com...
edit on 1-11-2016 by gmoneystunt because: (no reason given)

BlueShaman
+27 more
posted on Nov, 1 2016 @ 07:22 PM
link
This is becoming quite sad and painful to watch, almost as painful as watching the usual suspects of ATS still defending her.

Hah. I'm pretty sure the OP knows the video is Fake.

The main point was the first part.
It's Karma.
After Clinton arranged for demonstrations and violence (and ducks) at Trump rallies to intimidate Trump supporters, she should be able to tolerate some signs and chanting.

Did you think Pompano Beach was in Tennessee?

originally posted by: liveandlearn
a reply to: gmoneystunt
I am not a Hillary supporter but that video looks fake and I don't catch this often. Look at the other people and the video. They have a serious face. Just look closely.


Lol. Yeah its fake. Hillary cant even get up one step without a railing

posted on Nov, 1 2016 @ 07:34 PM
link
On a semi-related note, Tim Kaine was in Tallahassee on Friday when the news broke that the FBI was going to review new e-mails found on Weiner's laptop. There is a local radio host named Will Dance (full disclosure ... He supports Trump). He also does security details when called upon. According to his Monday morning show, he got a call from the SS asking him to work security. He laughed at them picking him, saying that while he was very professional, he couldn't believe that SS had been given his name BY THE CLINTON CAMPAIGN. If they had googled him, they would have never put his name on the list.

So anyway, he was very professional and didn't use the opportunity to ask questions, just be a good little security goon. Gabby Giffords and her husband were assigned to his car. He said they were nice but in his opinion were naïve about some issues. All in all very polite. The news broke while they were stopped and apparently they were all kept on hold for almost an hour while the campaign staff went into melt down. Security was getting nervous because as time kept creeping by it was getting closer to prime traffic time downtown at FSU and they were worried about traffic and security. All in all it was very funny to listen to what he had to say.

I obviously can not corroborate the story since I wasn't there but Will Dance is a known entity in Tallahassee. He is known as 'the pirate hunter' former police officer, paramedic and claims to have been a merc in the ME.

There's a podcast at the link if you are so inclined to listen.

I saw the picture from the NYT earlier, and heard about chanting, but wow, she left?? Too funny!!

Ahhhhh, I love this.... CNN, please share this with the world, oh wait, Hillary asked you to bury this...

The establishments days are numbered (i hope)...


I love Will and Jr! Here the second hour podcast that starts with that story:
Hour 2

I hope it continues when Hillary, the cowardly lying cheater, becomes president.

Don't say that, she might very well likely drone her political enemies here at home!
edit on 1-11-2016 by Wardaddy454 because: (no reason given)