We know FBI Director Comey sent a letter to Congress Committees about some new evidence connected to the Hillary email scandal.

Today we have the U.S. Department of Justice sending a letter pledging cooperation on all fronts.

The hot sauce is the fact that Peter J. Kadzik apparently is the same person that is in close contact with Clinton Campaign Chairman John Podesta.

This "close" relationship has been confirmed in released emails from the Podesta Files.

There's *always* a connection ain't there.


Now that the FBI has obtained the needed warrant to start poring over the 650,000 or so emails uncovered in Anthony Weiner's notebook, among which thousands of emails sent from Huma Abedin using Hillary Clinton's personal server, moments ago the Us Justice Department decided to also finally join the probe, and as AP reported moments ago, it vowed to dedicate all needed resources to quickly review the over half a million emails in the Clinton case.

In the letter to Congress, the DOJ writes that it “will continue to work closely with the FBI and together, dedicate all necessary resources and take appropriate steps as expeditiously as possible,” assistant attorney General Peter J. Kadzik writes in letters to House and Senate lawmakers.

Oh yes. Recall our post from last week, "Clinton Campaign Chair Had Dinner With Top DOJ Official One Day After Hillary's Benghazi Hearing" in which we reported that John Podesta had dinner with one of the highest ranked DOJ officials the very day after Hillary Clinton's Benghazi testimony?

It was Peter Kadzik.

Just tell us all where to stand.

posted on Oct, 31 2016 @ 05:19 PM
link
The investigation will be turned over to a Trump appointed DOJ soon enough. Doubt Podesta's buddy can make the emails disappear, probably being the inside informant to tell team Hillary what is found in the emails.

Of course they have a way out.
I hope Congress gets their turn and serves subpoenas. 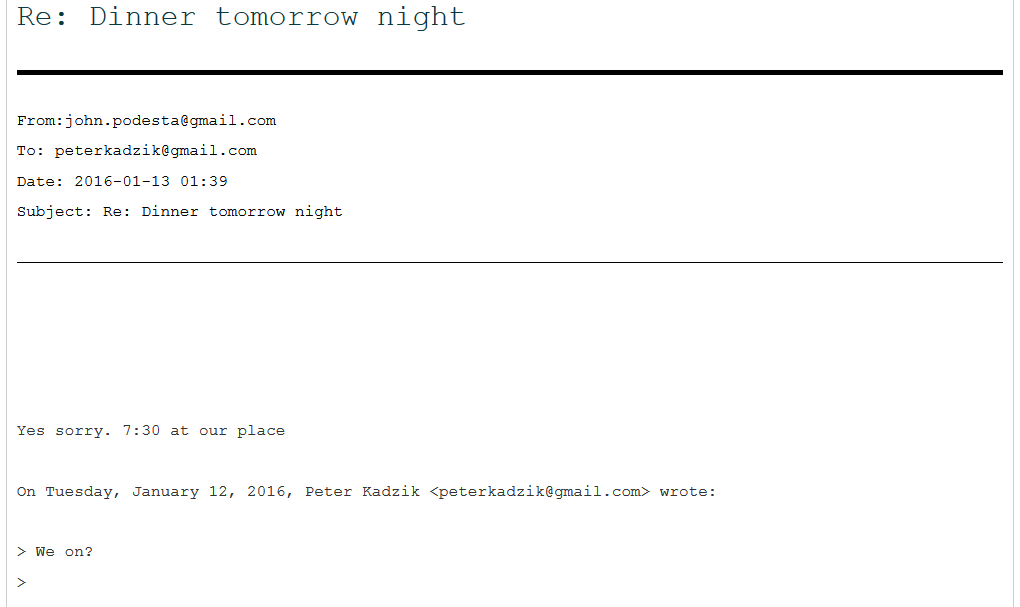 posted on Oct, 31 2016 @ 05:22 PM
link
He should recuse himself immediately. So what to do, if the rank and file FBI agents are stand up people and their bosses and their prosecutors are criminal scumbags? FRAG EM!! Worked in the NAM!

I see Kadzik is using a "gmail" account too !!

posted on Oct, 31 2016 @ 05:25 PM
link
This is hardly different than Loretta meeting Bill on
a plane in reality, only difference is it is behind closed doors.

Trump needs to hammer this hourly to get the attention
of House Oversight, or Grassley.

posted on Oct, 31 2016 @ 05:26 PM
link
I once thought that Wiener was a diversion, but it seems to have only drawn more attention to Huma and Hillary. Six degrees of separation seem generous at this point.

Politics sure do make strange bedfellows.

Is this the same PJ Kadzik asking to be part of the campaign? 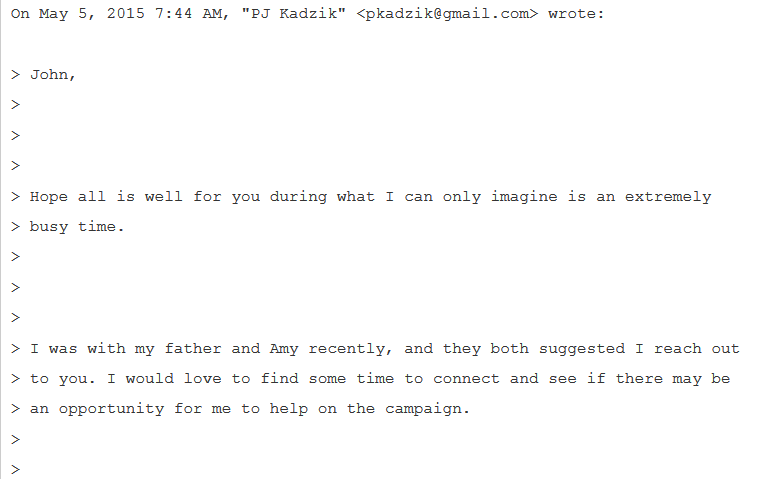 posted on Oct, 31 2016 @ 05:27 PM
link
He may as well be wearing a Hillary for President badge during this investigation

posted on Oct, 31 2016 @ 05:27 PM
link
He may as well be wearing a Hillary for President badge during this investigation

All the While the SCOTUS is Sitting Back Listening to All this and Wondering when the Suits that Will Eventually Reach them through the Courts will Finally Come .

It gets better because, as we further revealed, if there is one person in the DOJ who is John Podesta's, and thus the Clinton Foundation's inside man, it is Peter Kadjik.

Kadzik represented Podesta during the Monica Lewinsky investigation. And in the waning days of the Bill Clinton administration, Kadzik lobbied Podesta on behalf of Marc Rich, the fugitive who Bill Clinton controversially pardoned on his last day in office. That history is cited by Podesta in another email hacked from his Gmail account. In a Sept. 2008 email, which the Washington Free Beacon flagged last week, Podesta emailed an Obama campaign official to recommend Kadzik for a supportive role in the campaign. Podesta, who would later head up the Obama White House transition effort, wrote that Kadzik was a “fantastic lawyer” who “kept me out of jail.”

Justice is in good hands, we can rest assured that any wrong doing will be brought to light, if their are no criminal findings we can be sure it was determined after a very thorough investigation and all will be above reproach.

Angels will sing, and after Hillary slides into the White House down a rainbow shat from a unicorns butt while teddy bears fart glitter into the air, and all will be right with the world.

I'd like to quote some former angry co-workers over the years,
"burn this mofu***r down!"

originally posted by: eisegesis
I once thought that Wiener was a diversion, but it seems to have only drawn more attention to Huma and Hillary. Six degrees of separation seem generous at this point.

Politics sure do make strange bedfellows.

The joke (if one can call it that) would be on them if Hillary and Huma once thought that Wiener was just a diversion too... their sacrificial scapegoat all under their control... never once imagining how all of it would come back and bite 'em.