Many of you may Know I am American Muslim. I would say the Majority of people i live around are conservatives. They have always treated me with respect . Very welcoming . very warm people here . I have never had an issue in my town being Muslim . At heart I am a Libertarian ,physical conservative but in some aspects a social liberal. Given all that . I saw through all the political BS and recognized that Trump is our only hope to restore our nation. I put aside any bias or political ideology I had to see His message and his message is clear. (although i would rather see Rand or Trey as prez.)

In doing so I posted Trump signs that were torn down . Had "Hillary" spry painted on the STOP sign on my road . Had signs posted on the fence such as the following pic 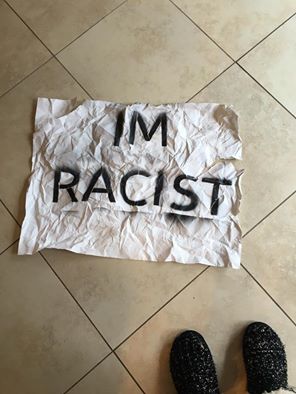 I am not Racist ! I only want to do the right things and give to my country the best i know how and right now that means voting for a man who i believe with all my heart ( after having many many doubts ) will restore our country and hopefully some of its values .

This country is headed down the drain and for once i feel i can do something to restore it by voting for trump,
but in doing so I have to face being called a Racist and having it posted on my fence .

I am not the only victim of this . My neighbors are dealing with it to. but they decided to take action . 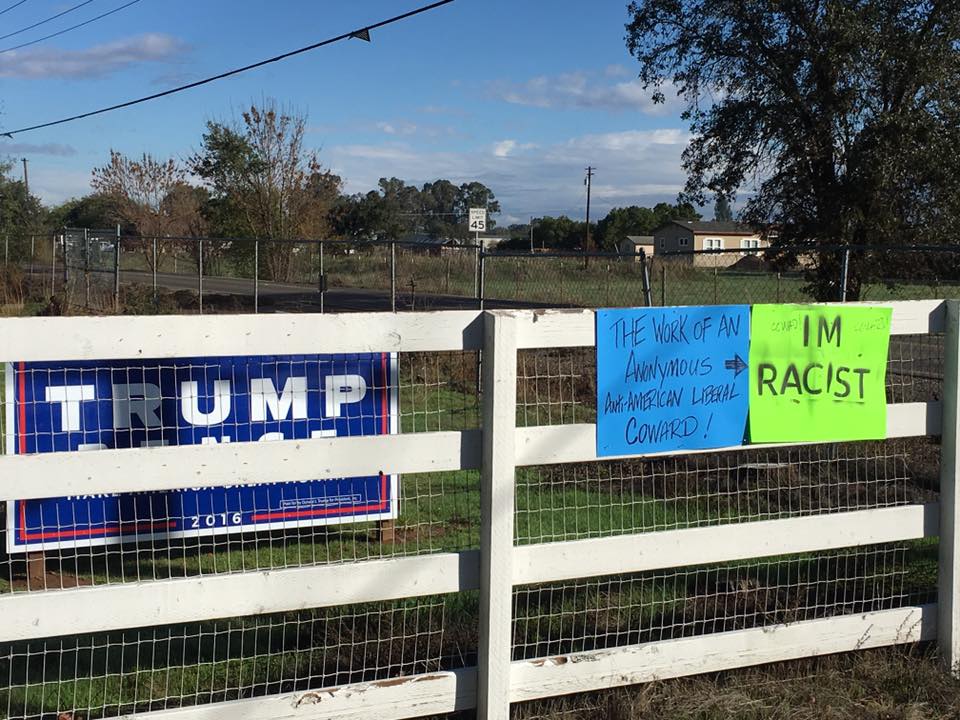 Take your country back folks . before its to late .

It's especially horrible when you live in a small community where everybody knows everybody, there's a good chance you or your neighbors know the sh*thead is. Hopefully things don't escalate any further.

BTW, what area of the country are you in?

it's ok buddy we are all racist here, we fully accept and embrace your racism

If you blindly judge someone as racist because they are a Trump supporter then you are in the wrong. Plenty of his supporters are not.

it's ok buddy we are all racist here, we fully accept and embrace your racism

No offence.. But you kind of are..

Judging someone as racist for supporting Trump is par for the course on ATS.

posted on Oct, 30 2016 @ 01:37 PM
link
I'm racist too! I prefer one race above all others, the human race. Skin color doesn't matter, we're all human and we all strive for love and acceptance, albeit in different ways sometimes.

The only way to a better future is through cooperation and acceptance, anything else will lead to failure.

not any more racist than you or anyone else.

Thanks for sharing your story. It is an injustice.

Another injustice of this sort of behavior, besides the condemning of people for crimes they have not committed, is the effect that crying wolf will have on real acts of racism and their victims.

posted on Oct, 30 2016 @ 02:54 PM
link
a reply to: Picklesneeze
I disagree. I think that is a argument people like to claim that rarely happens.
Not to say it doesn't but most of the post don't say that.

If they wish to make an enemy of you, be an enemy. If they act like adults and fellow citizens, do that.

Dont eat poo just because its served on your plate.

Going back to basics, if they act a fool, school em

posted on Oct, 30 2016 @ 10:34 PM
link
Nah, you just figured out the truth - a strong border keeps us all safe, you, me, and everyone else who's here legally and wants to part of the US and what its ideals and founding principles are.

It's just that too many people have been taught those ideas are fundamentally racist, sexist, homophobic and misogynistic.