Let’s revisit the genesis of the Anthony Weiner investigation - Things may not be what they seem.

This is really an interesting angle. We've all seen, Clinton can't be taken down head on. A bizarre game plan like this (whatever exactly this might be) isn't only a possibility, its the only way. Does it pan out eventually? Who knows, but damn if this isn't playing out like atoo-unrealistic political thriller novel/movie!!

posted on Oct, 30 2016 @ 10:27 PM
link
So the logic behind our main assumption here (Wiener was set up by the FBI) suggests that it would have to be some sort of sting operation right?

What's the chain of command on such an action? Does it stop at Comey's desk? (Trying to put some "real world" teeth into the idea.)

Your post doesn't make any sense at all to me, and it has nothing to do with OPs thought process.

originally posted by: queenofswords
Has it been proven that TDog is really 15 yrs. old, or that these messages were actually 100% for certain sent by her?

That was the first thing that popped in my mind when I was reading this. Most adults aren't even that articulate via text messages. Odd indeed, but it's not impossible that there was a mature and articulate 15 year old messaging him I suppose.

originally posted by: Gryphon66
So the logic behind our main assumption here (Wiener was set up by the FBI) suggests that it would have to be some sort of sting operation right?

What's the chain of command on such an action? Does it stop at Comey's desk? (Trying to put some "real world" teeth into the idea.)


I want to call it entrapment, but we've all seen 'To Catch a Predator,' so, I am assuming it must be legal to set something like this up if it's a sting operation. It's certainly plausible that Weiner could fall for a sting like this.

Of course, you know my theory involves Weiner being a willing participant, so in my world no rights are being violated and everyone is voluntarily cooperating/playing along.

posted on Oct, 31 2016 @ 04:19 PM
link
It seems that there is speculation in the media today that Huma could be a "spy" and that she intentionally forwarded documents to her Yahoo account.

It seems a massive quantity of emails! Could this excessively high number of emails be a contributed to her receiving a forwarded email, and then forwarding that on to others? You have to assume that their count of 650k is a combination of both sent & received. It literally takes seconds to hit the forward button with no other verbiage..... and I personally haven't seen any reports on how far back in time they go....

But then again, IF this were the case, wouldn't she be even more overly precautious of ANY device she was using to do so? That, in itself, makes me basically dismiss the theory.

And on the other hand, could the FBI have given Huma some type of "immunity" deal that directly related to the Clinton server, and after finding she forwarded a massive number of emails to herself - set up a sting for her husband (unknown to him) specifically to gain access to other devices they knew she was hiding?

The spy theory is intriguing to me, though I'm not sure how much I can actually buy into it

Breitbart has some headlines regarding this theory, as well as Infowars.

ADD: I appear to be several months late! after posting saw this: www.abovetopsecret.com...
edit on 31-10-2016 by Jusvistn because: added thread link

posted on Oct, 31 2016 @ 06:23 PM
link
According to photos at The Daily Mail posted today, Huma spent time at Clinton campaign headquarters in Brooklyn and took her son to school. She has sunglasses on so one can't assess her face.

You have to scroll down at link for the pictures

posted on Oct, 31 2016 @ 06:46 PM
link
I get the angle and a possible conspiracy or set-up...but...I know addicts. He is a sex addict and the conversations, etc. all sound like what I would expect. If she was "obsessed" with him, then it all kinda makes sense. The screenshots...probably to relive the chat.

But...Weiner isn't an idiot. I see more conspiracy as to how over a half million emails ended up on "his" computer. Was he watching what his wife was doing and downloading the emails? Did he keep them for the purpose of security to maybe to get back at her?

Something is there. I think is is more about the emails than the girl.

The 15 year old girl, in question used a second phone to take photos of her conversations with Weiner using the Confide app.

Again, two examples of her using a second camera/phone to take pictures of their conversations on Confide (read as: collect evidence): 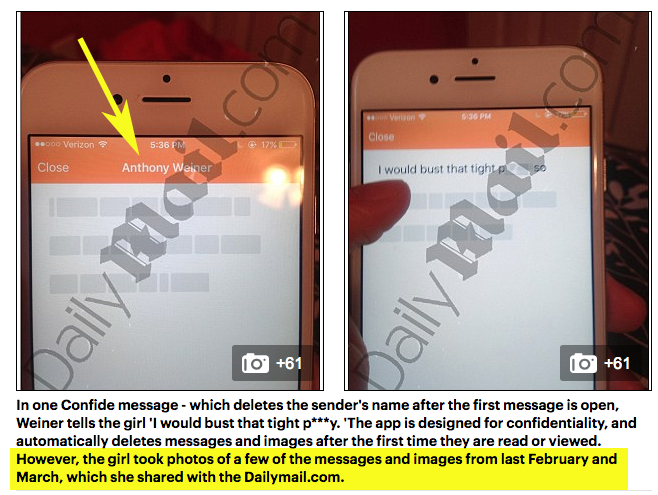 Obviously, the Daily Mail never questioned the girl on why she would do such a thing. But, I believe the following explains exactly why a second phone was necessary...

...and it furthers my theory that this girl was actively collecting enough evidence to open a FBI investigation, on purpose.

Confide doesn't 'let' you take screenshots. She had to use a second camera to take pics of their conversations if she wanted evidence.

Still not settled on any reason why this was all scripted..

ETA: Also, again, she had one chance to take those pics because the messages are deleted after they are opened:

She was ready and prepared to collect enough evidence against Weiner to open an FBI investigation. There is a reason this was orchestrated. Perhaps it will be clear eventually.
edit on 5-11-2016 by MotherMayEye because: (no reason given)

I thought of your thread when I saw this:

The Senate also offered up a companion bill earlier in the year, which was passed the Senate Judiciary Committee and is co-sponsored by Sens. Chuck Grassley, R-Iowa, and Pat Leahy, D-Vt.

I don't know, but could this bill have something to do with the Weiner laptop and the emails contained therein? We already know Hillary had FBI insiders passing on information to her... were they also thwarting investigations?

No good comes from making the truth -- and/or the truthtellers -- criminal.

posted on Feb, 13 2017 @ 01:18 AM
link
Looking at it as a game of dirty tricks, Weiner is such an obvious target as a roundabout way to get to Hillary. This is how things are done. Plus, Hillary made some pretty serious enemies in the past 40 years. I completely believe he was targeted, at least once. It would be remiss the think otherwise.

Huma reveals why she stayed with pervert Weiner.

Look, irrespective of everything else, Weiner HIMSELF KNEW HE WAS SEXTING WITH A 16 YEAR OLD
NO ONE forced him to do it.


E.g. Weiner is a pervert and a pedo and UNDERSERVING of ANY sympathy

I was thinking that too. That does not sound like a 15 year old.

Also - that part about the DMV, and getting a permit...
This is a classic, established way of reconfirming age during a sting.
For a prosecutable case, you must make it clear that the person knows full well they are chatting with a minor, especially if it goes over days or longer. You can't make it look like they might have forgotten.
You can't keep saying "I am 15" over and over.
So throwing in clever ways of establishing age, such as going for a permit, reestablishes clear statement that you are a minor.

But, the language was a little off, so it might not be a pro, or at least not someone who actually has skill.

well not for anything but a learners permit is not exclusive to 15 yo's. i got mine at 65.

but it does plant the 15yo idea, tho.

so what are these meatballs doing with all this stuff? they have what, 3 of hunter's too?

defund these azzjoles until we get some real results. as grissom say's, follow the evidence. CSI Vegas btw.