Here is the anonymous video on their take on it

Here is the leaked doc

Though this disturbed me

Improved strains of ZIKV have been delivered and we have
disseminated them to operatives. Unfortunately this will
suppress women voters more than men (even as ZIKV2 is
lethal in adults). This would hurt Hillary Clinton and
Trump voters are willing to risk lethal pathogens to vote

Hmm, upon close examination it looks hoaxish, based primarily on the laser mind control stuff at the bottom about illusion alien invasions...
edit on -050012am10kam by Ohanka because: (no reason given)

posted on Oct, 22 2016 @ 11:59 PM
link
No wonder the DNC is desperately trying every possible trick to denigrate Trump - that's their only hope of a win.

Oh, come on. This is absurd. The illusion of an alien invasion?

posted on Oct, 23 2016 @ 12:09 AM
link
Hope they get rekt on election day and Trump appoints Gowdy as special prosecutor or Attorney general and go after the whole crooked party...


I hear you but would Anonymous ruin their reputation over this?

It's not an centrally organised group. There is no "anonymous" as a singular entity. Just different people, or sometimes groups of people, using the label.

Oh, come on. This is absurd. The illusion of an alien invasion?

For almost two decades the Department of Defense and NASA have coordinated on a black book project under the codename FIRESIGN. FIRESIGN’s aim is to create a religious “awe effect” in enemy populations to create an instantaneous psychological soft-kill (abject submission). The operation uses high powered lasers to project real- seeming images on the sodium layer 100km above the surface. These images can cover hundreds or even thousands of square miles and can appear completely real, three dimensional, and can move.

These visual cues are augmented with pulsed ELF electromagnetic
emissions
(see: PROJECT SANGUINE) that attack the specific areas
of the prefrontal cortex that are stimulated during religious
experience. In limited tests, subjects have been able to be
overwhelmed on both axis of vastness (an overwhelming of the
subject’s frame of reference) and a powerful need-for-
accommodation. The mix of these two will produce inaction, lack of
focus on self or individual interaction, and gross transformations in mental equilibrium (a Road-to-Damascus Experience).


An obvious reference to Psychotronic technology.

This document just looks too good to be true.

I had only read the preamble before.
edit on 23-10-2016 by IgnoranceIsntBlisss because: (no reason given)

The FIRESIGN scenario is that of an invading extraterrestrial force of nearly incomprehensible scale (massive floating cities descending, god-sized “walkers” among the clouds with terrifying weapons, wheels of fire and eyes, etc.). This phenomena, when activated will bring electoral and social systems to a halt and, in afflicted areas, will permit a narrative wherein POTUS is able to “Call a halt” to the invasion and then “hand over the torch” to Clinton, providing a basic continuity of state.
AFTERMATH
The aftermath of FIRESIGN will be the psychological subjugation of areas where uprisings are most likely to occur. The induced trauma of FIRESIGN will provide ample cover to government and NGOs who will be “providing aid” (psychotropic to induce docility) and counseling services which will ensure further domestication.
FIRESIGN will require a great deal of power, mobile command stations with nitrogen- cooled super-computers, and the co-opting of the ELF arrays. We have created a schedule and teams roster that can be moved into position following the third debate.

posted on Oct, 23 2016 @ 12:31 AM
link
It looked like somebody took a professional data report, and then spliced some space beams crap in at the bottom.

Here's a real poll at least:


originally posted by: IgnoranceIsntBlisss
Most reliable polling agency since 2004:

Trumps up one since last night or the night before: 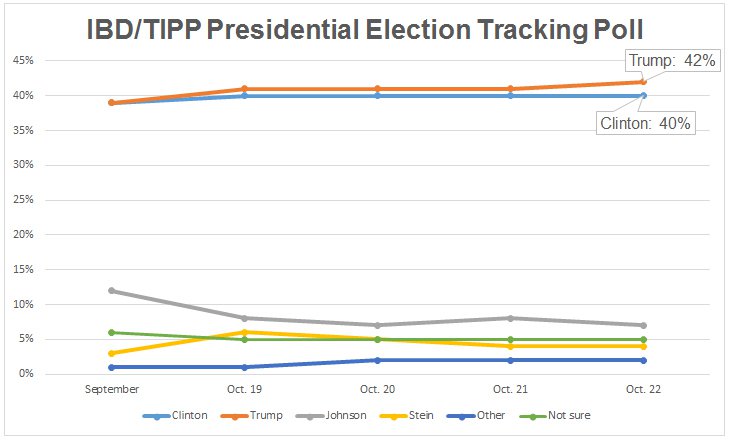 Looks like the jury is in on who won the debates.
edit on 23-10-2016 by IgnoranceIsntBlisss because: (no reason given)

posted on Oct, 23 2016 @ 12:49 AM
link
Upon further investigation the picture of the "laser projector" is actually a "four laser guide star", used for very large telescopes.

Knew it was too good to be true =(

posted on Oct, 23 2016 @ 12:53 AM
link
I cant believe they paid to have these scenarios used in a poll, that's so bizarre. I wouldn't doubt they would try something, they already paid rioters (proven recently) and talk about voter fraud, set up those women Trump accusers and their lawyer was a delegate for Clinton, so corrupt.

Regardless I think Trump will win on sheer turnout and enthusiasm. using 2012 polling data for this year is bogus methodology
edit on 23-10-2016 by Majorsetback because: (no reason given)

Disclaimer... I support none of the two... but this is absurd and stupid.

Yep. Trump was up one point before the debate, now he's up 2 points over Clinton. That poll's margin of error is 3.5%. I started a thread about the IDB/TIPP poll last week, after learning that it's been more accurate than any other, since 1994.


Donald's moving in the right direction!

Yet you didn't know it was too ridiculous to be true.