Scheon, a registered foreign agent for years, is still allowed to work on Fox News. 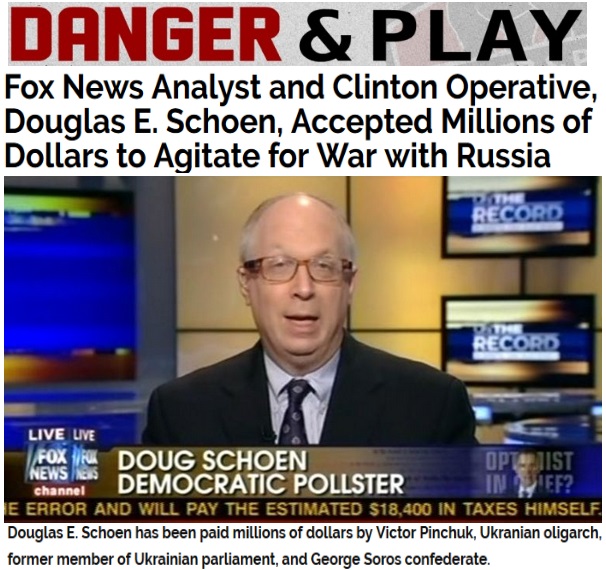 In a remarkable conflict-of-interest, Fox News analyst and former Clinton operative Douglas E. Schoen has failed to disclosed to readers that he’s been paid millions of dollars from Ukrainian agents to incite a war between the United States and Russia. Before inciting war with Russia, Schoen worked for Bill Clinton and brokered meeting (for $40,000 a month) between then-Secretary of State Hillary Clinton and billionaire oligarchs.

Pinchuk, a pal and funder of both Bill and Hillary Clinton, not only has generously supported Bill’s Clinton Global Initiative, but also has poured more than $13 million into the Bill, Hillary and Chelsea Clinton Foundation. Another close tie is Douglas E. Schoen (CFR), a longtime Clinton operative and political consultant, whom, according to the New York Times, Mr. Pinchuk hired as an adviser in 2000 — and to whom the oligarch has been paying a tidy retainer of $40,000 per month ever since.

One of the important ventures that Soros and Pinchuk are financing is the Ukrainian Crisis Media Center (CMC), a collaboration of Ukrainian public relations corporations and journalists that is headquartered in Kiev’s Hotel Ukraine. Ostensibly, it was created to counter the propaganda onslaught of Putin’s Russian media cartel. Much of the “independent news” we receive from Ukraine is produced by the CMC and stamped with the Pinchuk/Soros-approved brand of propaganda. That includes cheering on or papering over the fact that the “new” government in Kiev is simply the latest rotation of musical chairs, and it has ended with Pinchuk’s fellow oligarchs (virtually all of which are “former” communists) and their parliamentary blocs and political parties occupying the most important chairs (as we reported here).

Here goes an October 2016 Fox News report with Douglas E. Schoen barking like a typical Neocon on geoplotics, while continuing the domestic political claim that Putin is backing Trump:


So all of this would seem to explain Russia's beef with Hillary.

The whole ordeal with her taking bribes to give Russia uranium contracts is an interesting twist.

Other than tuning into the hacker war during the conflict, I didn't dig too far into the geopolitics at the time. So am quite interested to see different takes on the general issue in light of the data above.
edit on 21-10-2016 by IgnoranceIsntBlisss because: (no reason given)

But on a serious note, I can't wait to read this


I wasn't even sure if I wanted to post a 'news story', was going going back and forth, and then hit enter on accident and Rubicon crossed.
edit on 21-10-2016 by IgnoranceIsntBlisss because: (no reason given)

originally posted by: xuenchen
This guy is a real life NWO double agent !!!

eisegesis
+7 more
posted on Oct, 21 2016 @ 09:38 PM
link
This needs to be posted again. I slipped it in at the end of the last presidential debate thread where it may have gone unnoticed. Please excuse the redundancy.

US Army General Wesley Clark, in a 2007 Flora TV talk titled, “A Time to Lead,” would reveal this singular agenda by relating a conversation he had as far back as 1991 with then US Under Secretary of Defense for Policy, Paul Wolfowitz, by stating (our emphasis):

I said Mr. Secretary you must be pretty happy with the performance of the troops in Desert Storm. And he said, well yeah, he said but but not really, he said because the truth is we should have gotten rid of Saddam Hussein and we didn’t. And this was just after the Shia uprising in March of ’91 which we had provoked and then we kept our troops on the side lines and didn’t intervene. And he said, but one thing we did learn, he said, we learned that we can use our military in the region in the Middle East and the Soviets wont stop us. He said, and we have got about five or ten years to clean up those all Soviet client regimes; Syria, Iran, Iraq, – before the next great super power comes on to challenge us.

And indeed, even from 1991 onward, the goal of US intervention across the planet has been to establish deeply-entrenched global hegemony before another rising world power could balance American geopolitical domination.


Read it and weep.

Fast forward to today, with the US on the brink of war with Russia in Syria, and with China in the South China Sea, the United States has run out of time and finds the leading edge of its hegemonic ambitions chaffing against a reemerging Russia and a rising China.

So while Washington has concocted an array of excuses as to why it is involved in Syria’s conflict, running the full gambit from fearing “weapons of mass destruction” to fighting terrorists to addressing humanitarian concerns, the reality of America’s involvement in Syria boils down to the pursuit of the latest and most desperate leg of its rush to dominance before emerging world powers reintroduced balance and limits to Western hegemony.


" This admission made by US policymakers, politicians and the Western media all but admits that the US has never prioritized confronting terrorism in Syria and has been using the presence of terrorist organizations merely as a pretext for more direct Western military intervention. In fact, by acknowledging that Western-backed militant groups are indistinguishable and inseparable from designated terrorist organizations including Al Qaeda’s Syrian franchise, Jabhat Al-Nusra, the US is all but admitting it is intentionally arming and equipping the terrorists themselves. "

So , the Obama Administration is sending Arms to Terrorists Organizations in Syria ? Where is the Outrage America ?

originally posted by: Zanti Misfit
a reply to: eisegesis


So , the Obama Administration is sending Arms to Terrorists Organizations in Syria ? Where is the Outrage America ?


You should see my face...cuz it is expressing outrage.

This has been going on for years. Chickens are coming home to roost.

posted on Oct, 21 2016 @ 11:37 PM
link
And nobody has a bigger hard on for war with Russia than one George Soros. He will use his puppet Clinton to make his dream a reality.

These are some sick people.

Nothing to say but great reporting,

Excellent find. The Clintons have their fingers in some of the most war torn, violent places on Earth at the moment. The misery that they have helped bring about would make them along with Soros the worst war criminals in history. A scary thought that she could possibly do it from inside the Oval office. Imagine the collateral damage if she drags the US into a war with Russia. 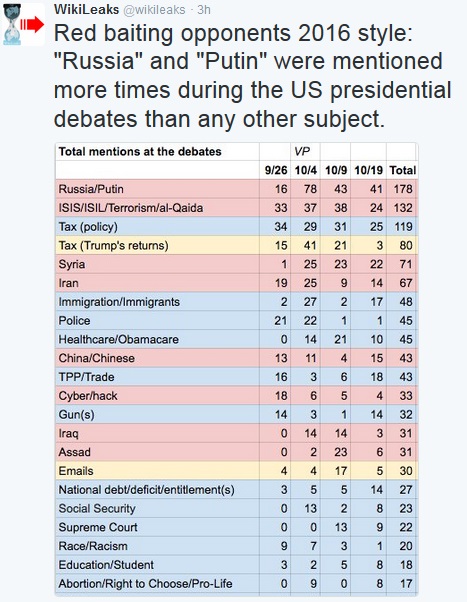 there will be no war with russia.

you have to view it from the elitists and government leaders.

putin got greedy, he tried what is effectively like a hostile corporate takeover of the financial and economic system with a russian economy that is little larger than mexicos. he tried to screw over the bankers and set up an alternative financing and reserve currency.

so putin gambled and lost.

so now the bankers and board members of the institutions are pissed off at putin. they are going to punish him and kick him out of the club basically.

putin screaming world war 3, and patriotism and nationalism propaganda but thats because he cant do anything about it.

putins been burning through his gold reserves to prop up his falling economy and currency since they put sanctions on russia and dropped the price of oil. he has 6 months gold reserves left before russia goes bankrupt.

and in 22 days putin knows there is going to be a fed rate hike and increased sanctions which will screw him even more.

putin gambled and lost, he was just too greedy. now the people he tried to screw over, well they gonna kick him out of the club.

putins just taking down the russian people with him, when russia goes bankrupt, the russians turn on putin.

so putin knows its checkmate and he is screwed and desperate.

there will be no war, russia will burn through its remaining gold reserves in 6 months and be bankrupt.

they dont need to go to war, in 6 months putin will bankrupt russia all by himself with no bullets fired.

syria is just a ploy by putin in a losing gamble, he trying to link peace talks with lifting or sanctions on russia. its why it failed and will continue to fail cuz americans and europeans will not lift sanctions until crimea is returned to ukraine.

in fact there is talk in news by leaders of increasing sanctions on russia.

putin did the hacks cuz he is afraid of hillary.

its checkmate and putin knows in 6 months he will have bankrupted russia by burning through what ever gold reserves russia had, 15 billion a day to prop up their falling currency and economy.

trumps a soros puppet also. its why i say trump ran so hillary could win. kind of like ross perot effect.

soros lent trump 160 million in 2004 to build his hotel. they are buddy buddy.

He added, “It must be wrong to do what your enemies want you to do. They want people to turn against Muslims, treat them with suspicion, and convince the Muslim community that there is no alternative except terrorism.”

Is it possible that was business then, business men doing business? I mean, is Trump truly in Soros pocket over it?

I hadn't seen that bit before so now I'm quite curious, actually.