"Wait'll ya see what happens in the coming years — lotsa luck Hillary — thanks for doing a great job!"

This morning Trump took to took to Twitter in what certainly seems to me to be tantamount to admitting that he lost the debate: 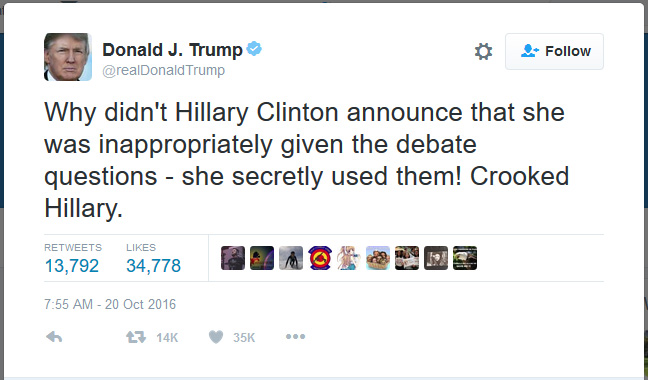 For all his bloviating, deep down does Donald Trump believe less in himself than his supporters? Has he come unhinged? Did he read a Tweet this morning that said that Fox News conspired with Clinton? I thought only Chris Wallace knew the questions beforehand? Is he accusing Chris Wallace of rigging the debate? 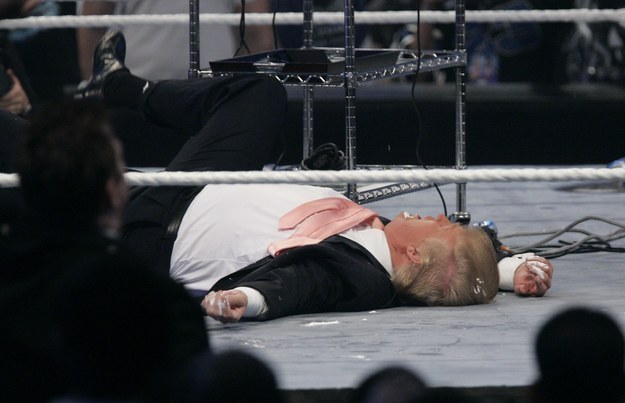 Seek out some mental health therapy before it's toooooo late!

Deny Arrogance
+39 more
posted on Oct, 20 2016 @ 05:27 PM
link
The DNC has a documented history of cheating by giving Hillary access to debate questions ahead of time.

But I'm guessing you are in deeper denial than Donna "brazen liar" Brazile on that fact,

Ats has been terribly glitchy for me.

originally posted by: seeker1963
a reply to: theantediluvian

see how that works?

Of course he's saying the debate rigged! Hillary wiped the floor with him last night!

Everything that doesn't go Trump's way is always rigged. He's been saying this his entire life and what else would you expect from a guy born with a silver spoon in his mouth. He's a spoiled brat & if he ever visited Wonka's Chocolate factory he'd been whisked away by those glorious orange ommmmpa lummmmpas within minutes!

Many here have an unhealthy obsession with Hillary Clinton as well, and the OP ain't nowhere near them levels yet. When Trump loses in November expect this obsession to quickly pass, believe me.

Everything Donald loses at, is rigged!!

He got owned by Hillary last night.

Good job getting the first reply in this time though!

Giving his opponent the questions in advance IS rigging the debate.

originally posted by: seeker1963
a reply to: theantediluvian

Seek out some mental health therapy before it's toooooo late!

Well he is running to be the leader of the free world. I wouldn't call any level of obsession at this point 'unhealthy.'

Seems like Trump's supporters can take criticism of Trump about as well as he can.

originally posted by: seeker1963
You have an unhealthy obsession with Donald Trump!

He even has a guy wearing an ATBA* in his avatar.

Just before a big event is about to come to a conclusion, they begin crying about how the system was rigged and that they are right, even if the following conclusion contradicts that assertion.

For example, Benghazi and Hillary's emails.

No wrongdoing in Bengahzi, but they created a conspiracy around it to justify their continued ranting on the issue.

No criminal charges for the emails, but they cried conspiracy long before Comey made his statement.

It's a self-defense mechanism for people used to being the loser.

This is Trumps way of saying he Lost the debate!!

He is gonna lose so big, I'm telling you it's gonna be yuge, believe me!!!

posted on Oct, 20 2016 @ 05:41 PM
link
Theantediluvian after this is all over I’m going to see to it your nominated for a Pulitzer
Prize for your excellent commentary and OP is on Trump!


However, I have to tell you Trump is running a fraud with Hillary by deliberately losing to her and aforetime beating the GOP candidates of whom many would have beat Hillary.

This election is an awesome secret operation run by, I don't know who to get Hillary elected. It is a masterful job!


They have fooled the poor saps who have fallen for Trump.


This is clearly WWF politics

This election is a joke!

Wouldn't you be the fool, for celebrating the establishment's candidate Hillary?

If Hillary is part of the plan, why wouldn't you throw a wrench in it?