Hillary Is Being Guided Through Her Speech!!!!

“…I am not going to slam the door on women and children…. that picture of that little four year old boy, in allepo with the blood coming down from his face is haunting and so we are going to do very careful thorough vetting….”

…In fact, the killer of the of people at the night club…”

Hillary begins stuttering at this point and listen to who SPEAKS out for her!!! It is not her voice!!! Who is speaking this??? Who is guiding and leading Hillary through her speech???

Is this allowed in the final president debate???

Can you link to the video you are talking about?

I agree, we need to know what the hell your talking about to better understand how to analyze this statement.

If I understand the laws of the new Youtube correctly, the time should be saved in the link to the debate link below:

It is very slight, but it is begins when Hillary starts stuttering. It is not her voice. What is this?

Yup it went directly to the part you are referring to. I dont think she was being fed answers... It does look like she is reading something though. I noticed that throughout the debate.


If you turn the volume, you can her an odd voice say a word when Hillary begins stuttering, and then Hillary picks up her place with this "guided voice cue". Don't you guys hear this?

It is very slight, but it is begins when Hillary starts stuttering. It is not her voice. What is this?


She's having a mini seizure and her vocal cords are constricted.
Or another stroke.
Or her meds are wearing off.

I hear something, but it is not a word. Certainly not "dozens." Strange though ...

posted on Oct, 19 2016 @ 10:12 PM
link
She was reading from something meaning she was connected to something. Not her own thoughts. She was looking down then up then down. She was reading from something. Trump was not doing that stuff. Debates in the future, all that crap needs to be illegal. Let's see the overhead view of the debate NBC. Just going off of that BS she lost. It's cheating.

What is that? Is this distortion being picked up by the micrphone from Hillary's vireless hearing aids transmitting her entire speach to her to follow in sync?

Why would this voice come out of nowhere?

I actually heard a stray word there where you pointed out.
Donald Trump's mouth opened at the same time. I am going to say that he made the nois3.

Somebody whispers something when she begins to stumble with her statement. I can't make out what they are saying. They may not have even been speaking to her, but I can definitely hear it.

originally posted by: oddnutz
clear as day a whisper says 'dozens' when she got stuck

doubt they were feeding her everything she said but certainly would help her when stuck and give her talking points to counter what Trump said.

LMAO!!! It was a mini seizure, wasn't it? Or was it Hillary's split personality coming out?

I was too busy listening to the sound rather than watching how Hillary's mouth was moving in relation to this sound coming out of nowhere!!

nah his mouth was closed so was hers and the whisper was spoken very quick. what are the odds that when she got stuck we hear a whisper that sounds like dozens and her very next word is dozens???


Donald Trump is a Bad Man , I am Telling you the Truth ! 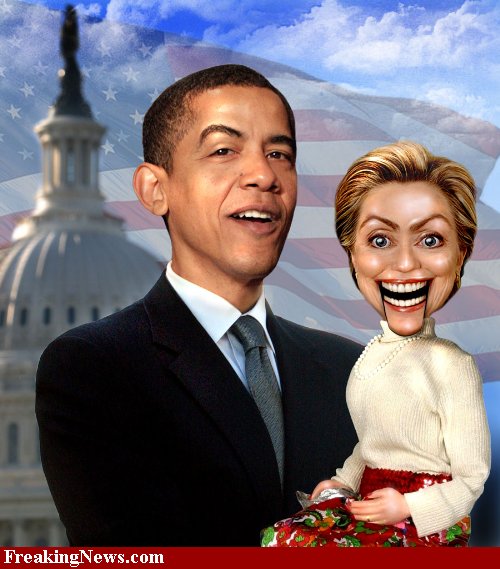 I watched it a couple of more times and now I doubt that the sound came from him.