Hillary Asked That Her emails Be Deleted?!

So which version is true?

- FBI Notes: "Clinton stated she was also unaware of the March 2015 e-mail deletions by PRN."

- Judicial Watch Testimony: "She believes that her personal e-mails were not kept, and she does not have any personal knowledge about the details of that process."

because THIS is what the latest dump reveals:

- Private Talking Points (WikiLeaks): "As I said in March, I chose not to keep the personal ones. I asked that they be deleted."

I guess you have to have a public and private position on things, indeed! Like breaking the law?

So, to the details ... we all know about Mills and Samuelson who had their laptops deleted/destroyed for immunity.

They powwow and decide to let the emails go despite knowing all about the subpoena. And both Mills and Clinton then deny any knowledge of those emails. Remember, this happened after the subpoena was received and they all knew about it. So this was allowed to happen on purpose. There was, indeed, intent.

And here is what came out in the dump today, from her, to Podesta. She chose not to keep the personal ones and asked they be deleted.

Podesta keeps pleading the 5th in court, his name is 100% the one redacted from that document.

posted on Oct, 19 2016 @ 05:21 PM
link
Russia should dump the week of Nov 1st if they got the emails. Looks like she will win but it ain't over til it's over is all I can say. I think this is actually more difficult for Hillary now because tea leaves are saying they are out there. Just this dark ominous cloud that follows her around. The bottom might or might not drop out of it. Not a fun position I'm sure.

originally posted by: Zanti Misfit
a reply to: ketsuko

Oh that's just what the people that are closest to her think.
You can't believe them.... you have to listen to CNN.

Oh, are you saying that ZeroHedge is not an approved source for telling me what I should think about those stolen documents?

No, that's CNN saying it.

Hiya Ketsuko....The only thing that seems off about this is like myself. I have a security clearance, and I have a few email addresses, personal, business and for writing stories, blogs etc.

I keep all my S.C. emails from FEMA/D. Homeland Security and Emerg. Management, but delete my personal stuff ...and at times, some of the S.C. stuff too, so I can see it...

Her position is what made it bad...but then again...to do that is business as usual....we do it all the time....but it's the SUBSTANCE of WHAT she deleted that matters I guess.*

*PS THIS MESSAGE WILL SELF DESTRUCT IN 5 SECONDS (I used to LOVE MIssion Impossible!) 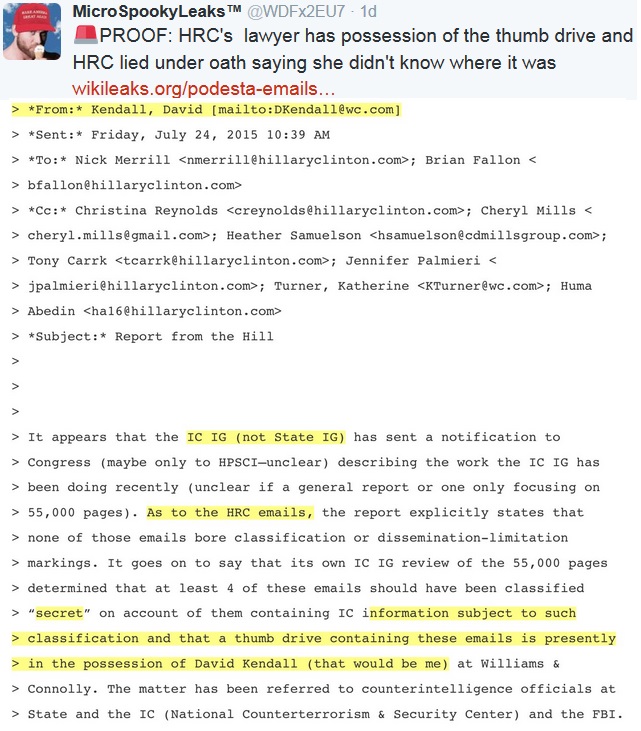 What that screencap actually says is that IC IG has sent a report to Congress claiming that David Kendall has possession of a thumb-drive.

Kendall himself is the sender of this news, and he does not confirm the report's claim in the email.

This isn't evidence, it's pretty much hearsay, and it's certainly not confirmation of the whereabouts of any thumb-drive.

That's true, but we also know that she said everything on her personal server was strictly personal in nature and not classified ... but that turned out to not be true.

So what was "personal"?

It's like the second coming of Bill Clinton ... it depends on what the definition of "is" is only this comes with shades of potential treason.
edit on 19-10-2016 by ketsuko because: (no reason given)

A federal judge is being asked to seize the USB flash drive that holds copies of former Secretary of State Hillary Clinton’s private emails.

Conservative legal activist Larry Klayman on Wednesday filed a motion to have a judge take control of the flash drive, which is being held by David Kendall, Clinton’s lawyer, as part of his ongoing racketeering lawsuit against the Democratic presidential frontrunner.

Youre right about that. I think the position requires some secured emails...but private servers, mixed agendas, what and when...let alone WHY she deleted them....thats WAAAAAAAY wrong.

And securing old read emails by an attorney-senator-Secretary of the United States...I would think is pretty important...but obviously...she wasnt thinking. Not about deleting them...or even saying crap that would NEED to be deleted by not placing more importance on what was said and when...even why.

It all stinks. Myself? I bounce 'em all to an external drive in my desk drawer, and only worry(barely) about someone coming in and stealing it. She couldve done something similar.

Whats the word? "Transparency" of the office? Well..she left the curtain closed....

That's as may be, but I was explicitly commenting on the screen-cap upthread, which does not say what the description claims it says.