The Media as Candidates: Colbert/O'Reilly 2016

posted on Oct, 19 2016 @ 01:15 PM
link
I just watched this clip from Colbert's show interviewing Bill O'Reilly.
I have previously watched Jon Stewart debate O'Reilly, and enjoyed that as well. But whenever I've tried to watch O'Reilly's actual show, I have had to turn it off due to the anger and revulsion that I felt because of his crap.

The Media really is the Government's Front Line now.

It's sad...but at least Colbert and O'Reilly are talking to each other. That's more what we need than ANYTHING.

The men discuss how the media really does behave ---- who is rooting for whom, and how there is "no top" to tell the networks what to do. He explains that FOX is the same as CNN and MSNBC and that they are all broadcasting against Trump. Interesting stuff.

Listening to them talk about things while smiling, listening, laughing, and having a generally good time while doing it was a very refreshing break from the daily stream.

It literally helped me take a step back.
I nominate the two of them as a ticket. Someone tweet this for me, I don't know how:

Yeah, that was pretty good. Colbert, while trying to keep it comical and also keep himself as the host, allowed room for OReilly to state his points. I did like it more though when Stewart had OReilly on and introduced him with a big red carpet and flower girls tossing rose petals in his path.
And like Colbert himself, I am still waiting for Trump to accept and invitation to join him on the show. As Colbert says, until Trump accepts the invitation Colbert will have to continue to think of him as a pussy.

Win, lose or drop out, the Republican nominee has laid waste to the American political system. On the trail for the last gasp of the ugliest campaign in our nation's history
By Matt Taibbi 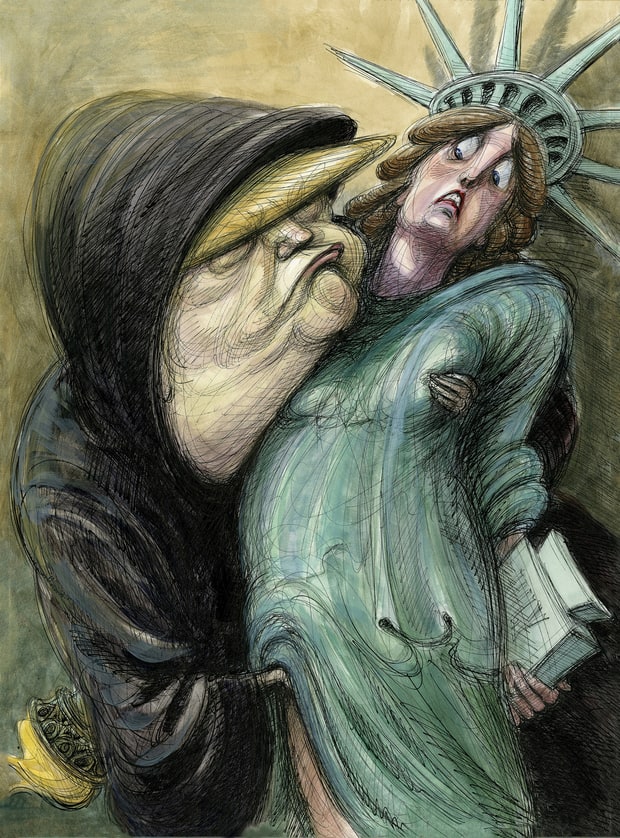 Trump's early rampage through the Republican field made literary sense.

It was classic farce. He was the lewd, unwelcome guest who horrified priggish, decent society, a theme that has mesmerized audiences for centuries, from Vanity Fair to The Government Inspector to (closer to home) Fear and Loathing in Las Vegas.

When you let a hands-y, drunken slob loose at an aristocrats' ball, the satirical power of the story comes from the aristocrats deserving what comes next. And nothing has ever deserved a comeuppance quite like the American presidential electoral process, which had become as exclusive and cut off from the people as a tsarist shooting party.

The first symptom of a degraded aristocracy is a lack of capable candidates for the throne.

After years of indulgence, ruling families become frail, inbred and isolated, with no one but mystics, impotents and children to put forward as kings.

Think of Nikolai Romanov reading fortunes as his troops starved at the front. Weak princes lead to popular uprisings. Which brings us to this year's Republican field.

There wasn't one capable or inspiring person in the infamous "Clown Car" lineup. All 16 of the non-Trump entrants were dunces, religious zealots, wimps or tyrants, all equally out of touch with voters.

Scott Walker was a lipless sadist who in centuries past would have worn a leather jerkin and thrown dogs off the castle walls for recreation.
Marco Rubio was the young rake with debts.
eb Bush was the last offering in a fast-diminishing hereditary line.
Ted Cruz was the Zodiac Killer.

Yikes. This is so very disturbing. And how many of you are disturbed by it? I really don't know. I'm just glad that Colbert and O'Reilly don't have the same tension that Hillary and Donald show........

Or, do they?
Maybe the Hillary and Donald show is all a scam anyway. On Nov 6 they'll join ranks and the ticket will be Trump/Hillary 2016.

Pence is as bland as milk-toast. Kaine is a fun guy, very close to my age and grew up in my own area....
I mostly just have a real problem with the plate-spinning going on. Can you say "Mediadiarrhea"? hash tag mediadiarrhea

Way to derail a thread.

LOL! Did you just now realize it was me?
I haven't derailed anything. It's my thread, and I have added content to it.

This whole debacle is an unseemly, unspeakably embarrassing blip in the history of the human race. It is no less mesmerizing than the fall of Rome. It's been coming for decades now. That you are just now getting upset about it does not make it less slowly-cooked.

Ten and a half years ago, I was working at the local Hyatt Regency. I listened to NPR/Morning Edition on my way there every day. I remember with a chill up my spine about a story I heard that stated exactly what would happen.

The US is falling like the Roman Empire did. Except, we can keep it going if we want to. By talking to each other, ignoring the ceaseless background noise, and getting busy.

No, cav. The media is its own entity --- it stands alone on the fourth rope-rail.

AH....THAT theory is blown and THE VERY ESSENCE of my belief THANKS to that SUPERPOWER I have acquired called COMMON SENSE.
NOT really applicable to most SJW efforts AKA ...common.

I see THE DNC as a national CONSTITUTIONAL threat ,they are using covert tactics and cells,if they win and Misbehave I WILL act accordingly.


Well, first of all, Hunger Games is a series of books written at a tween-age level and billed as for young adults. Yet it's unputdownable for adults, too. It touches us like Shakespeare used to touch his audience. Just a lot more sophisticated.


Hunger Games is really an ancient legend retold for the billionth time. It started out as a series - three fairly short novels in a row.

NOW it is three movies.
I'm grateful that you are willing to go and prevent it. You are correct, I can not fight except like I am doing now.
edit on 10/19/2016 by BuzzyWigs because: (no reason given)

Or wait. Come to think of it, I do know how to shoot a gun, and also arrows....I do know how to fish, and how to throw knives. I do know the basic steps to incapacitate an attacker (solar plexus, instep, nose, groin). I do have pepper spray and a knife at hand in my car, and I know how to light a fire. I know how to build a make-shift shelter, and how to read the terrain.....also how to sew, how to cook, how to take care of babies.....

but. so, yeah. If you want to fight them off, you'll truly be my hero in a time when I'm ready for any port in a storm, and doing my damnedest to look after the vulnerable and physically weak.
edit on 10/19/2016 by BuzzyWigs because: (no reason given)

I mean your MIND not being American but MORE liberal/ global,here actually.

I am a nationalist over globalist's whom I regard as a form of ALYNSKY jihadists,it's SJW arms like BLM ,ACORN and others have defined WHOM they are RATHER clearly.

I know. You have very alarming ideas about people like me and others.

You CAN'T be a target YOU are duped, DUH.
YOU won't EVEN try to fight on my turf ,You only will get the results.
ONLY an idiot kills the ants and NOT the queen.
edit on 19-10-2016 by cavtrooper7 because: (no reason given)

I haven't ,I'm a nonaffiliated and I wanted Carson for his intellect.

Haha even Carson put himself to sleep with his words.

I don't listen to nature sounds when I sleep anymore. I listen to Ben Carson.

Here....just to add some entertainment to the preshow: