The article opens by discussing how when American colonists originally declared independence, they also freed themselves of unwanted control from corporations. The article puts it more elegantly than I can:

[When they declared independence]... they also freed themselves from control by English corporations that extracted their wealth and dominated trade. After fighting a revolution to end this exploitation, our country’s founders retained a healthy fear of corporate power and wisely limited corporations exclusively to a business role. Corporations were forbidden from attempting to influence elections, public policy, and other realms of civic society.

Furthermore, it discusses some of the conditions the Founding Fathers included in order for entities to earn the privilege of becoming a corporation:


Now, if we look at the monetary influence in politics and our everyday affairs, I would say we are essentially back to where we were prior to becoming a sovereign nation, except that instead of England having an unjust say in our lives, it is money and corporate influence.

The article goes on to discuss corporate personhood, and how this allowed corporations to skirt by some of the limitations they faced that prevented corporations from becoming too powerful, as they did prior to declaring independence:

From that point on, the 14th Amendment, enacted to protect rights of freed slaves, was used routinely to grant corporations constitutional “personhood.” Justices have since struck down hundreds of local, state and federal laws enacted to protect people from corporate harm based on this illegitimate premise. Armed with these “rights,” corporations increased control over resources, jobs, commerce, politicians, even judges and the law.

I'd also like to leave this image here, because it illustrates how many of the biggest injustices mankind has faced in recent history is due to legalese and "word magic", which can be easily refuted if you consider the widely accepted ethics and morals that our society (and often our government officials) claim to respect and live (and rule) by: 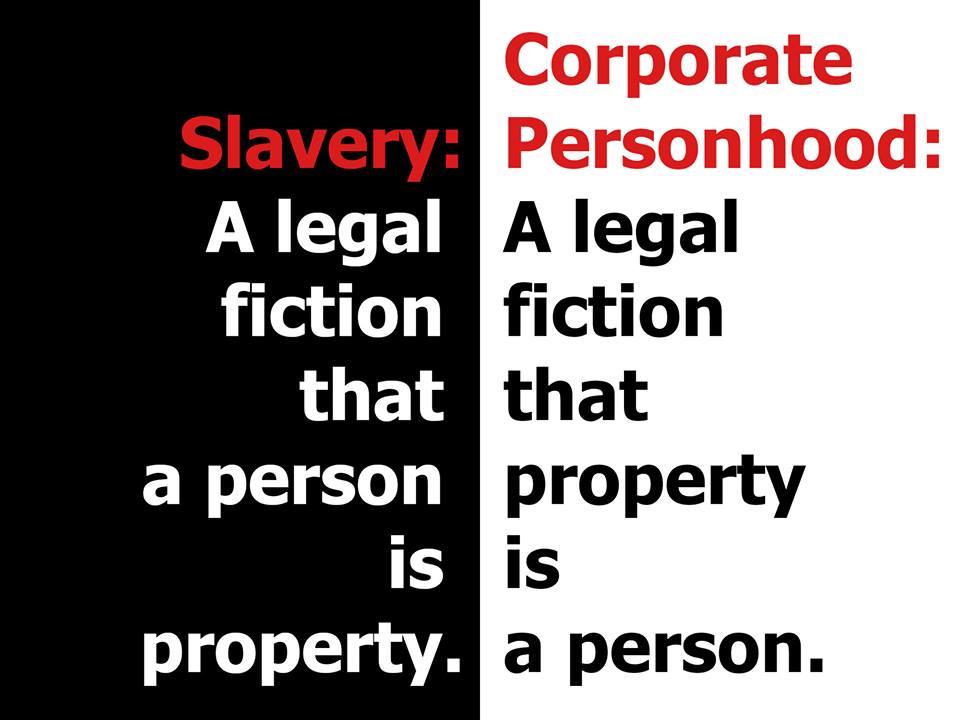 posted on Oct, 18 2016 @ 02:11 PM
link
P.S. the article also goes on to discuss legal cases, and the idea that the "United States" is a corporation (referring to the District of Columbia Organic Act of 1871, and the "use of ALL CAPITAL LETTERS")

But I didn't include this in the OP because the primary purpose of this OP is to discuss corporate influence and 1776 and the country's beginning, versus where we are today.

Please feel free to also discuss the rest of the article, but I didn't choose to include that in the OP for the aforementioned reasons.

I was inspired to make the thread because of the implications in that article.

What brought me to that article was a post one of my unnamed friends made on FaceBook about voting, and the "US being a corporation that is traded on the NYSE" - I tried researching this statement and didn't find anything.

I will ask my friend if I can have permission to share what he wrote.

posted on Oct, 18 2016 @ 02:18 PM
link
Their oppressors were half a world away in a time when it took a long time to get information from one place to another...

Our oppressors are sitting on our faces, and have ready access to information right in our homes.

This is going to get messy.

Based on your assessment, we (today) should be even MORE pissed than the original American colonists were, am I correct?

If so, I totally agree, and am upset (rightfully so), but the world has also changed quite a lot since back then, and the fear factor of TPTB is likely a bit more today than it was back then (with technology, intelligence collection and the police/authorities sheer might that we see today). Just my opinion. The people feel somewhat powerless..

Based on your assessment, we (today) should be even MORE pissed than the original American colonists were, am I correct?

If so, I totally agree, and am upset (rightfully so), but the world has also changed quite a lot since back then, and the fear factor of TPTB is likely a bit more today than it was back then (with technology, intelligence collection and the police/authorities sheer might that we see today). Just my opinion. The people feel somewhat powerless..


I don't think anyone cares anymore. Everyone is comfortable with their lot in life.

I know many people who are pissed at what's going on right now and are not at all content with "their lot", or the society they are living in

They will complain about it until they are blue in the face, not one person will do anything about it. What are they going to do? Go to their local congressman? Like he/she would really care about what happens to their own citizens. LOL.

You sure as heck can't even think about going the violent route, they will send the judge dredds (judge,jury, and executioner) after you in a hot second.

You could not vote or vote third party but we all know that is a dead end unless by a miracle the majority of people in the US were so fed up with the government to not vote and demand the replacement of the two candidates.