1-Upsmanship The Game - The New Reality: Who BESIDES Hillary is Most Fit For Presidency?

posted on Oct, 17 2016 @ 11:36 PM
link
In this thread this election concept is the one we have, except for Hillary. You can still argue against Trump, to release all of the energy, but I hope you can also provide counter examples while doing so. In pursuit of a quality discourse, a Pro-Con drop in each post wold be ideal.

I'm really interested in seeing where this could go.

For bringing 'both' parties to their knees, I will open up with Donald Trump, yet don't intend to take away from the dynamics of that argument set.

Therefore, I'll open up with him having the balls to set up to the plate. To be the crazy uncle, against the odds, assuming he's not a 'plant'.

To carry the discourse, one might counter how their pick might be better at it, or how that pick is weakened by it, and how theirs isn't, or whatever!

Just because its the mudpit doesn't mean we have to carry on about / insult each other. If you go tha route have fun but you 'lose' the game!
edit on 17-10-2016 by IgnoranceIsntBlisss because: (no reason given)

I don't think anyone human besides Trump and (rephrase.. Minus-)Hillary is fit for the job anymore. Possibly aliens but like, that's not happening.

Or America could create a Unionized Gov't run by the People for The People.
edit on 18-10-2016 by Encryptor because: (no reason given)

I think I'm voting for Johnson. He doesn't really have any chance to win even a single state, so I guess it's a protest vote.

McMullin, on the other hand, really could take Utah.
edit on 18-10-2016 by Greggers because: (no reason given)


He doesn't really have any chance to win even a single state, so I guess it's a protest vote.


Actually, it could be a bit more than that, as was pointed out to me by another member.
A party which gets 5% of the vote becomes eligible for public campaign funding next go round.

posted on Oct, 18 2016 @ 12:16 AM
link
There is no alternative to Trump. We need someone not affiliated with politics, large enough financial clout to fund themselves through the primaries, has loads of energy and a following and who isn't afraid to take on the entire establishment.

No one else has shown the slightest ability or intention in doing so.

Bernie billed himself as an outsider but he's a proven fraud and sellout who wasted no time going back and supporting both the establishment and Hillary, against everything he ran on. A man of no principle who can be controlled easily.

That's the problem with career politicians.

So who's next who can offer what Trump can and take on the establishment with a sizable bankroll and isn't afraid to speak out?

Or America could create a Unionized Gov't run by the People for The People.

You honestly believe with a population of 300 million plus -- everyone wanting what they want -- a People for The People system is going to work without a strong central government? 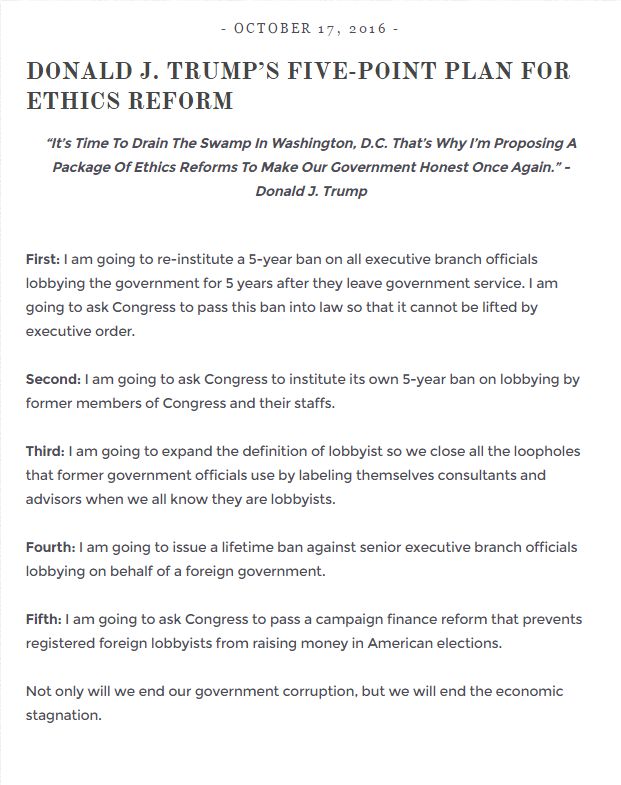 Link to source of picture
edit on 18-10-2016 by LockNLoad because: Added link

That sounds like a pretty good argument, except for the goal here wasn't supposed to about winning an 'entire game' in one post.

I was picturing a game of tennis, more so than a war of arm wrestling.

Not to even try to 'set rules', not per se, just trying to script a neato game we might enjoy.....

Problem. Trump is likely to discover that the current Congress and any conceivable future Congress (mid term) are not the sort of "employees" he is used to dealing with. He's used to getting his own way.

I'm probably going to vote Johnson. Possibly Darrel Castle of the Constitution Party, though I've got to look and listen a hell of a lot more before that ever happens...

The point is, there are all sorts of alternatives to tweedle-dee, and tweedle-dum. Some of whom might actually be able to do a better job than the two dweebs being foisted off on us by the two major parties.

I know I'm beginning to sound like a broken record, but I'm stubborn that way. Or a masochist....

originally posted by: Phage
a reply to: LockNLoad

Problem. Trump is likely to discover that the current Congress and any conceivable future Congress (mid term) are not the sort of "employees" he is used to dealing with. He's used to getting his own way.

Well... one step at a time, first the WH then we can start working on cleaning out Congress. We can't just give up and roll over.

I'd like to see someone with the credentials of a Supreme Court Justice. They tend to be more capable of objectivity, than most, and their experience in Law lets them appreciate balance, fairness and different sides. To be an SCJ implies long experience and wisdom. They are naturally averse to the PJ Barnum BS of the travelling circus act we call 'Presidential candidates.'

Anthony Kennedy is a good example. He's a moderate Republican for starters who has respect from Dem associates and vice versa. He supported gay marriage, insisted on the right for parents to know if their (underage) child sought an abortion and supports abortion in other circumstances. He doesn't exist in a US bubble and looks at how other nations regard international laws and uses them to add scope to his judgements. He's also played a part in building up and reforming the judicial system in Iraq.

People like this should be the future of politics in my opinion. They aren't extremists or party loyalists. They're old enough to have been passionate in youth and moderate in later years. Most of all they are intellectual, balanced and strong as steel when making decisions.

posted on Oct, 18 2016 @ 12:45 AM
link
The choice is only Trump the system is so corrupt , certain cliques so entrenched, state propaganda so effective , the people so
non thinking and apathetic with Clinton i think it can only get worse not better.


They're old enough to have been passionate in youth and moderate in later years.


Yeah. But by the time the aren't a Justice anymore, they're really old.

Sure, I noted that too. Never thought I'd see the day come when I'd favour a codger. Kennedy's an example for my argument rather than the mascot.

posted on Oct, 18 2016 @ 12:55 AM
link
I haven't really looked at her performance or given more than glance or two at her policy positions but I've watched her speak a few times and seen her in numerous interviews and Tulsi Gabbard seems informed, capable, intelligent, honest, sane and charismatic. She also resigned as vice chair of the DNC which seems like a good sign.
edit on 2016-10-18 by theantediluvian because: (no reason given)

Another factor, if anyone would have an understanding and respect for the difference and authority of the 3 branches it would be a Justice.