I wasn't going to write a thread on this since it hadn't made it to the news, but now there is an article out on it.

Here is an article that touches slightly on his hack - along with the Podesta twitter hack:


A hacker also appears to have uncovered the passwords to dozens of senators’ email addresses, as well as social security numbers and credit card info for many Democrats including Vice President Joe Biden, Senate Minority Leader Harry Reid, House Minority Leader Nancy Pelosi, and acting Chair of the DNC Donna Brazile. The information was posted to pastebin.

“I am not directly linked with the podesta [sic] hacks,” the hacker, who asked that their name not be used, told Gizmodo over Twitter DM. “I can say that the details in Podesta leaks where helpful in conducting phishing attacks for the DNC members before the leaks emerged on Wikileaks.”

The below image is from the article. The actual leak has many more names and details. 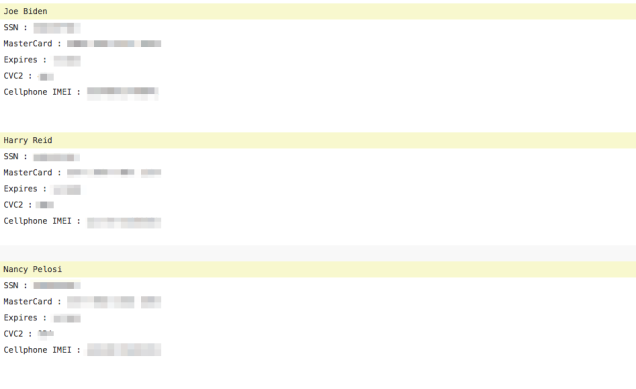 This hack happened several days ago. Since then the hacker released this letter allegedly from inside the DNC emails as of October 12th 2016. 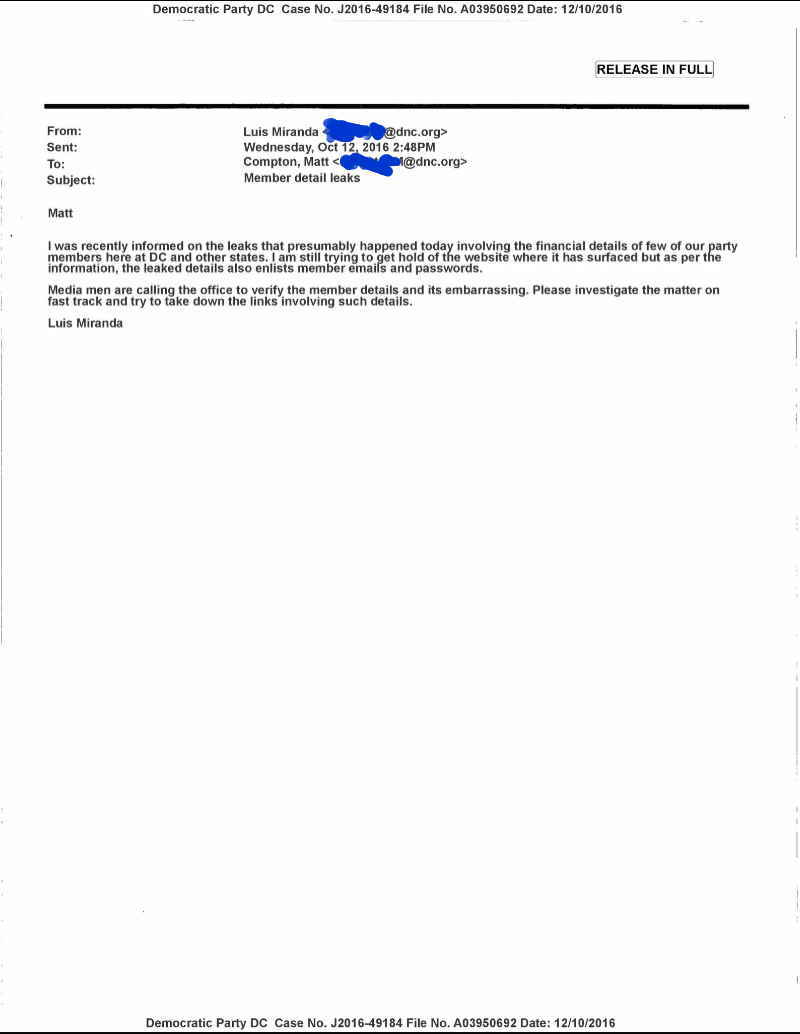 Then, just yesterday he released another set of leaks including emails/passwords along with more private information from DNC members. He did, however, stop short of releasing personal information on donors as it seems to be an ethical boundary for him. He specifies that his release only includes those from the DNC.

Here are snippets of his release. I've edited out any sensitive parts - 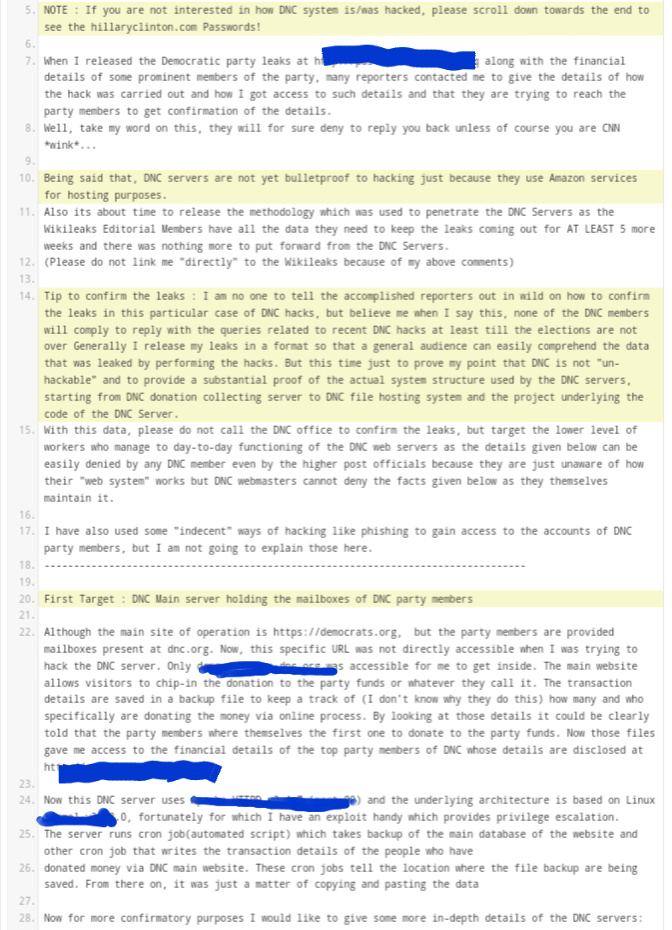 He goes into full details on how the hack was accomplished and discloses all the emails/passwords etc.
He also shows how hillaryclintonCom. Emails were hacked.

Last, he is saying that Wikileaks has these newest set of leaks and we can expect them in the following days.

Background information on the hacktivist is readily available on his twitter account (s). He has posted several other hacks in the past. For the last 2 years he has been on a hiatus and just recently came back on the scene. This person is not a Russian, but had access to the podesta emails before they released them and quite obviously associates with Anonymous.

Another one of his hacks is from the Pakistan Government and apparently shows how they are supporting ISIS in India.

It's not exactly clear how many emails were hacked - but this may be a huge blow to the DNC and Hillary by seeing what has been happening over the last month of elections. The hacker hasn't released the emails yet - it's unclear if they will be exclusive to Wikileaks or if other outlets are available. The last leak included details on 26 individuals including Huma Abebin. The previous included Seth Rich

For obvious reasons, I will not link to where this info is found or the hacktivist's twitter account. If you happen to run across it, please do not post it or any links in this thread as it contains individuals private information

This leak could be related to Joe Biden's announcement today that the CIA is prepping for a cyber attack on Russia. Perhaps they are laying the ground work to blame Russia once these new leaks come out? Everything I've seen with this hacker shows he has no ties to Russia(although he did recently follow Putin on twitter, odd) and is actually part of a US based hacker group that was quite active in 2012, many of the members are still around and several have been arrested in the past for other cyber related offenses.

There are three primary possibilities that make sense for this hack(from most likely to least):

Democrats are being made out to be total fools.

originally posted by: Wide-Eyes
a reply to: ghostrager

May be time for those hackers to check out the media.

Or, a peaceful march all throughout their building.

Time to wake these people up.

The media doesn't pick our President.

The nameless faceless Electoral College does.

IAMTAT
+10 more
posted on Oct, 15 2016 @ 09:02 PM
link
Fascinating that Seth Rich is again mentioned.
There are new and enigmatic statements just now coming out from anon about Seth Rich...They're saying ALL will be made crystal clear very soon.

originally posted by: Wide-Eyes
a reply to: ghostrager


Seems to have foundation and may be very revealing, since it current.
Anon is saying that Monday will be a big day. We will see.

I didn't see a link to the where the notes from the purported hacker came from?

They can't touch it without exposing themselves.

If the leak is legit, imagine how much more collusion we'll see between the DNC and MSM vs. The Podesta emails.

I wanted to hear what they are up to now, not last year.

posted on Oct, 15 2016 @ 09:07 PM
link
DNC= Dirty -N- Crooked
With all the leaks of their info it clearly shows that they want trouble with Russia.
Why do they seem so hell bent on going to war with Russia .?
Why is Russia the new bad guy again? Because they are sick of the west trying to control the world and aren't going to go for it anymore?

posted on Oct, 15 2016 @ 09:10 PM
link
I wonder why they only hack the Democrats. If it was Russia doing it why only pick on one side. Maybe all the hackers are Republicans. Hmmm

George Herbert Walker Bush: “Sarah, if the American people ever find out what we have done, they would chase us down the street and lynch us.”

They're all in on it- ALL of them. And they're fighting for their system. Ever watched an animal fight for its life?

Russia does not seem to have a two party system.

originally posted by: JHumm
DNC= Dirty -N- Crooked
With all the leaks of their info it clearly shows that they want trouble with Russia.
Why do they seem so hell bent on going to war with Russia .?
Why is Russia the new bad guy again? Because they are sick of the west trying to control the world and aren't going to go for it anymore?


Why are Dems ramping up the war machine against Russia?
The size of their distraction must be proportional to size of their crisis.

I won't post a link that references the hacker or their leaks. And again, I'd encourage others to do the same as individuals information can be exposed and goes against T&C. 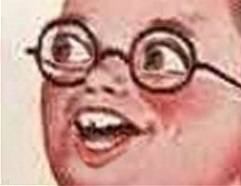 Is this one supposed to contain more sizzle, or is this all pester work?

They don't only hack the Dems. It's just that the republicans don't have any recent dirt worth revealing. Apart from Donald's pussy grabbing of course...

posted on Oct, 15 2016 @ 09:29 PM
link
I know the government is blaming Russia for all these hacks. I just don't get why Russia would only hack the democrats and not any other entities. I'm skeptical that Russia is behind all this.

I hope that since these emails are more recent, we'll find out if Hillary really had pnuemonia. Maybe they'll reveal some info on the health issues.