No one is more qualified than Hillary Clinton


I take back all the rhetoric in regards to Hillary because. Including both democrats and/or republicans Hillary did not earn the single most amount of money from lobbyist

The first time I'd be able to vote, And it's between a corrupt career politician and a rich playboy horndog

Trump is disgusting weirdo that should've never been nominated. I'll just leave that at that.

Hillary is quick on her feet, very trustworthy and has one of the sharpest memories plus We get a 2 for 1 with Bill Clinton, We are deeply in debt teetering on the edges of both financial and moral bankruptcy. And I trust Hillary Clinton, who After so many many years as a career politician is finally going to bring back some stability.

Hillary didn't after leaked excerpts of her private speeches, admit she had a public position and a private position , Hillary didn't call black people super predators, she doesent pander to women

CNN she has not committed perjury on multiple occasions, she also didn't take money from Saudis who simultaneously funded Isis, then conspired to cover it up, Due to a concussion she did not say she could not recall something over 70 times when asked questions, she has not made decisions that led directly to the death of Americans, She didn't delete 33,300 emails with BleachBit after a court ordered Subpoena , She also
didn't have a private server of her own, full of classified information.

they knew no one would ever vote for Clinton train field by the new PC world and SJW's unless she was running against the misogynistic bully, the literal trump card. But what they weren't privy to was the fact people are sick of lying politicians and trump would gain so much support. So they started doing damage control, thereby exposing their bias

sadly the generations before me have beaten badly there is literally no stopping what's coming, Hillary Clinton. Even if trump magically won the electoral vote nothing he did would get passed, you don't want to believe it but you know it.

Hook line and sinker pass the point of no return. Not only were the nominations rigged, This woman almost died running her 2016 campaign. She is going to win, anything else is just theater
edit on 14-10-2016 by ssenerawa because: (no reason given)

That made me piss myself .

It was a joke right

Hillary is quick on her feet, very trustworthy and has one of the sharpest memories

Hillary quick on her feet?


Hillary Clinton appeared to stagger and faint in footage showing her early ... off curb, "knees buckled", lost a shoe as she was helped into van.

has one of the sharpest memories?

You are being sarcastic, right?

posted on Oct, 14 2016 @ 06:37 AM
link
The lesser of two evils is still evil. Consider yourself fortunate, at a young age you have concluded that this is all a scam. It takes some of us half a century to realize that and when we do it's painful. Love yourself, be good to yourself and realize that ultimately you are sovereign of yourself. I wish you peace.

No one is more qualified than Hillary Clinton:

A - ...to send the USA spiraling into total chaos and destruction.

B - ...to most definitely start a war with Russia.

C - ...to assure healthcare becomes even more expensive for all.

D - ...to tell the American people one thing but really do another, as her history has shown time and again.

Oh... sorry. Was this multiple choice?

people are sick of lying politicians

Great thing about freedom, you have that right to think that way.

No one is more qualified than Hillary Clinton.

I would rather vote for no one then Clinton. 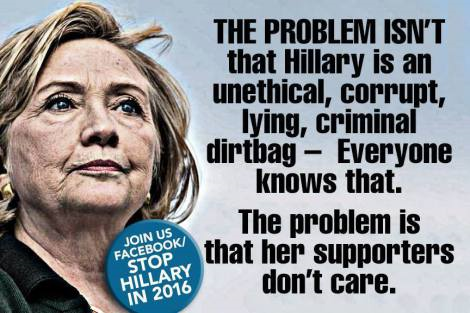 Show these corrupt dinosaur monsters that the fresh meat won't take their # any more. Obama fooled the new voters last time around, Clinton is trying.

Thank God my vote negates yours!

F --- to make sure that everyone in and around and connected to DC continues to get richer and richer while we all get poorer and poorer.

originally posted by: lordcomac
It's your first vote- yours and many others.
Send a message, vote outside the two party system.

Show these corrupt dinosaur monsters that the fresh meat won't take their # any more. Obama fooled the new voters last time around, Clinton is trying.


Send a message to the third parties - PUT UP VIABLE CANDIDATES - and then maybe I'd do that.

Too many people seem to think the third parties aren't viable because folks won't vote for them, but this year I was all ready to do that only to discover that Johnson, Aleppo aside, isn't a true libertarian. He's a wolf in sheep's clothing. And Stein makes Bernie sound economically coherent which is a miracle in and of itself.

This election more than any other would have seen a serious third party run.

Imagine if Rand Paul had gone libertarian instead of trying to outlast the Republican field? Or if Ron Paul had done it?

originally posted by: Denoli
Hillary is quick on her feet, very trustworthy and has one of the sharpest memories plus We get a 2 for 1 with Bill Clinton,

That made me piss myself .

It was a joke right


I was thinking the same thing. HAHA no disrespect, OP but where have you been lately?


I can understand why the Clinton's want to help the poor people of Haiti....
That place is a gold mine!
Just ask Hillary's brother Tony Rodham!


I can understand why the Clinton's want to help the poor people of Haiti....
That place is a gold mine!
Just ask Hillary's brother Tony Rodham!


Make her president and she can work really hard at turning the US into a similar gold mine. The real problem is the other countries of the world aren't nearly so charitable and easy to bilk as we rich Americans are.


Hillary is quick on her feet, very trustworthy...

I see funny cigarettes are legal in your state.

posted on Oct, 14 2016 @ 08:00 AM
link
This needs to be put in the joke forum. I'm not saying Trump is any better either but this woman is the epitome of corrupt. If you like corporations, banks, other countries completely dictating how the government is run you are on your way. And forget about getting any accurate information from her staff. They are going to build a wall just like Trump but that wall is to keep you out of their stuff. As for the national border they don't care. That's more voters for them. Let people flow in like a river. If we start getting more terror attacks they will blame it on something else totally unrelated to the situation like a video or the person had a mental disorder and we need to combat mental illness...or some other BS.

She is also not going to use troops on the ground. Go ask any military expert and they will tell you that you can't defeat a large force with drones and special forces. You have to have bodies on the ground to hold the ground. This is why ISIS is growing. Nobody to contain them or take back and control the areas they occupied. This is warfare 101. Her and Obama are clueless on how to defeat ISIS or anyone else for that matter. Obama fired all the generals that told him it would not work.
edit on 14-10-2016 by LifeMode because: (no reason given)