Wonder what the motivation is behind that??? How is this legal???


During an on-stage Q & A session with Xerox’s chairman and CEO in March 2014, Clinton used Wall Street terminology to express her opposition to ending cannabis prohibition “in all senses of the word”:URSULA BURNS: So long means thumbs up, short means thumbs down; or long means I support, short means I don’t. I’m going to start with — I’m going to give you about ten long-shorts.

SECRETARY CLINTON: Even if you could make money on a short, you can’t answer short.

URSULA BURNS: You can answer short, but you got to be careful about letting anybody else know that. They will bet against you. So legalization of pot?

SECRETARY CLINTON: Short in all senses of the word.

We need a new government a new system more transparency more control over the politicians more checks and balances. James Comey needs to be fired and we possibly need to start protesting Venezuela style to get this accomplished.

Stopped backing your scummy politicians it's time to uproot the embedded system.

originally posted by: damwel
Did she grope them as she promised them?

She had Bill do the follow up reach around....

posted on Oct, 13 2016 @ 08:56 AM
link
The Regressive Left at it again. The powerful people in this country love their structure of power, and it's pretty clear that Hillary Clinton owes them more than a few favors.

Also, Xerox chairman? TIL Xerox is still a relevant company. They seem to be behind the times, tanking in the market, but still getting massive multi million dollar contracts awarded to them by the government. Couldn't possibly be corruption, could it? Not with Hillary involved!

originally posted by: Cobaltic1978
Maybe she blames all of Bill's ills on the toke he took back in college.

Except that nobody becomes a rapist from smoking a joint.

At least now we can make sense of why this is still a thing. This links directly to the private prison system jailing more potheads than violent criminals. There's a lot of money in the system with this... Sad and unfortunate.

originally posted by: Darkmadness
Now we know the truth. The banks don't want it.

Wonder what the motivation is behind that??? How is this legal???


During an on-stage Q & A session with Xerox’s chairman and CEO in March 2014, Clinton used Wall Street terminology to express her opposition to ending cannabis prohibition “in all senses of the word”:URSULA BURNS: So long means thumbs up, short means thumbs down; or long means I support, short means I don’t. I’m going to start with — I’m going to give you about ten long-shorts.


I think perhaps you might want to go in and look at the longer emails where this was found. I notice that the story you're citing has repeated several things that turned out to be false including "She told Goldman Sachs she was “far removed” from ordinary people and that “you need both a public and a private position.”" which both look different when presented in context.

The quoted exchange is just... weird. Why should it be quoted like that in an email (why are they sending transcripts in emails?) I'd like to see some better sources if anyone has them, including the full context.
edit on 13-10-2016 by Byrd because: (no reason given)

originally posted by: WilburnRoach
For $200,000 a speech I would tell them whatever they want to hear.


originally posted by: WilburnRoach
For $200,000 a speech I would tell them whatever they want to hear.

originally posted by: Byrd
The quoted exchange is just... weird. Why should it be quoted like that in an email (why are they sending transcripts in emails?) I'd like to see some better sources if anyone has them, including the full context.

Looks like standard internal DNC dossiers to me. By the same guy that wrote their dossier on the Clinton Foundation Vulnerabilities. The DNC knows all her dirties: 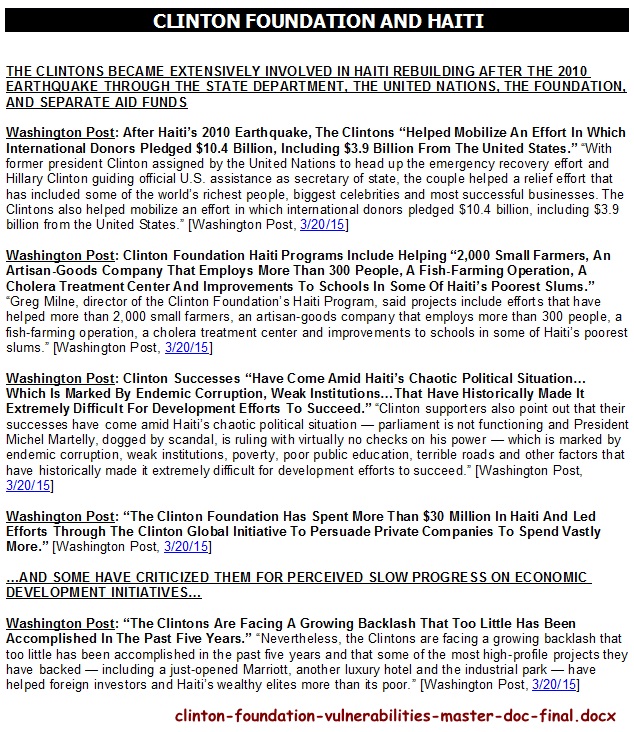 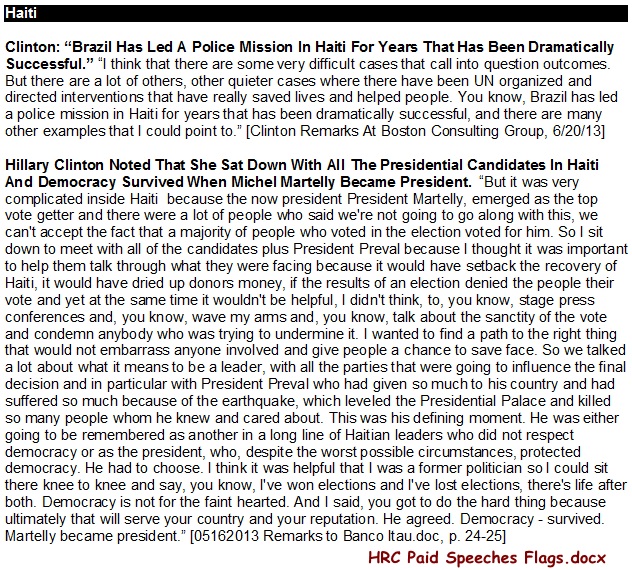 Throwing people into jail and removing their right to work is terrorism.

Our country is being run by terrorists.


originally posted by: WilburnRoach
For $200,000 a speech I would tell them whatever they want to hear.


I wasn't comparing anyone to anyone else.

I was stating a fact.
Unscrupulous people don't have a problem with telling someone whatever they want to hear when money is invoved.

posted on Oct, 13 2016 @ 10:17 AM
link
Of course the establishment wants Cannabis to remain illegal. It will directly conflict with big pharma, the prison industrial complex and most importantly it is a deprogramming substance. It causes people to be critical thinkers and think outside the box and to question things. That by far is the biggest threat to the establishment and is why people who use it are penalized by society. You can go do just about any other drug on the weekend and not worry about losing your job come Monday but take one puff of the Mary and you could find yourself standing in the unemployment line. You could be a generally good person loved by many and contribute to society in positive ways but get caught with a roach in your car and find yourself incarcerated with truly dangerous people.

The prohibition of Cannabis is one of the most blatant affronts to humanity and personal freedom. It is indicative of just how owned and controlled we the people really are. Our overlords want well behaved and obedient slaves for the factories and cubicles. It truly is disgusting how deluded some people are when it comes to this issue. They buy the establishment lies and propaganda hook line and sinker then perpetuate those lies by parroting establishment talking points. Most of us know someone who uses Cannabis and is genuinely a decent person. These are our brothers, sisters, children, friends and neighbors that are being penalized and criminalized by a corrupt system that does not wish for us have anything other than state sponsored opinions. It's a plant that makes people happy, cures legitimate ailments and sometimes makes you a little hungry for gods sake. We should revolt over this issue alone but alas we are nation of apathetic drones incapable of seeing the matrix for what it is unfortunately. This issue makes me so angry just so so angry.
edit on 13-10-2016 by RainbowPhoenix because: (no reason given)

Right. It's about the money as is, including the larger picture of how pot acts as a 'screen play' keeping the border patrol so busy to keep lubricated the scene so the big loads of hardcore drugs make their way on up and in. I covered this pretty well in my "CIA Sponsored Drugs Timeline".

Their motivations seem pretty obvious to me.

Drug companies make an awful lot of money, producing pills and powders that may, if bias is removed from the process by which these things are vetted, prove to be less effective and more ridden with pitfalls, than cannabis derived treatments for various ailments, both physical, and psychological. The revenue these companies pull in, is absolutely necessary to the economy, or rather, it is absolutely necessary to the current, lucrative structure of the economy. The economy of a country is like any physical structure of significant scale, in that there are several areas, several architectural features which are load bearing, and without which the economy could, potentially, weaken or fail.

The current model, the current architecture, holds that drug companies hold up a certain end of the economy by doing what they do. That is, by creating drugs, some of which simply do not work, others of which work just fine but are fantastically overpriced relative to their cost of production, and others which form the basis of any decent pharmacy stock. These companies are absolutely fundamental to the way the economy runs today. Now, in a genuinely free market economy, such as a capitalist one, the idea is that ANY product which is both legal to produce, distribute, and possess, should have a chance to compete with other products aimed at the same market and/or consumer base. If cannabis derived products were to be approved for general consumption, then there is a possibility that the individuals who benefit most from driving up costs of other drugs, would find their massive companies with significant chunks of their revenue evaporating overnight, as people flock to the alternatives provided by medical marijuana, and other cannabis related products.

Now, please understand, although this would potentially cause economic havoc, I personally believe that in the long term, that structural alteration would be survivable, and with significant aplomb. I also believe that since a great many of the current producers of cannabis, cannabis derived products, and advocates of the herb are anti-establishment, that it would lead to a less corrupt market for healing in general, since the herb producers would be making the regular drug companies look like total scum by comparison, what with the herb producers being ideologically driven to get their product to as many people who need it as possible, as opposed to being part of an industry which historically has been about screwing as many dollars per pill out of a massive number of people, as possible.

It would basically force drug companies to clean up their act, behave reasonably with regard to pricing, and get them motivated to exclusively create products which work, and cause few noteworthy side effects, as well as investing in creating solutions to medical problems which are not "sexy" enough, or widespread enough to warrant investigation under current circumstances.

Heres the thing though. Cannabis related products are NOT currently free to compete with products made by the big, powerful drug companies, in a great deal of the US. As things stand, and if Hillary is to be believed on her stance toward these things, will continue to stand, even in the face of evidence to suggest it is a bad idea, possession of the substance is still illegal in a grand portion of the US, and distribution can still attract serious jail time in certain States.

While this remains the case, while people like Hillary continue to stand in the way of the will of the people on this matter, while the opinions of the powerful are considered before and with greater weight than the opinions of the voting public, there is little hope of any broad and positive change to this situation. That is an absolute disgrace, but you have to remember that Hillary Clinton is a pro-war, anti-liberty, freedom hating she-monster from the deepest depths of Hell. She supports the intelligence services in their quest to steal your private data. She supports the military industrial complex in their desire to make a heap of money by murdering people, most of whom have never done a damned thing wrong. She supports the people who own your nation, in their quest to rinse every last dollar and nickle out of every one of you, and hold you all down so that you can never fight the power that has been purchased out from under you.

That does not make her any different than any other person who may be running for president, but I think it is wise to be absolutely certain about motivations here. The motivations of the companies demanding her fealty is that they want to continue to make money without competition. Her motivation is that she wants support and power more than she desires her next breath.