Last Nail in the Coffin... USA, Sold to the Highest Bidder

Whoever gets elected next, it'll be the last nail in the coffin of America as we "know it".

I could go on and on about change. If you want to gain an appreciation for it, check out how all business structures that intend to exist moving forward have adopted "Change" as their central tenet of being (their "mission statement").

I'm clear on how your heart is not "in" this, but choosing to stick yer heels in is only going to make it worse.

posted on Oct, 11 2016 @ 08:47 PM
link
In my opinion the USA was never owned by "the people" and never will be. Someone gave the founding fathers "permission" to start this country in the first place. Reality isn't what it seems.

originally posted by: RedMenace16
Here we go again, next we're going to be put in fema camps, UN troops will invade, martial law will be implemented, soup kitchens on every corner, they'll come door to door taking yer guns mean come on dude.

The soup kitchens won't be happening.

C'mon, who? Who are you addressing, OP (myself)? Because I didn't claim any of those things, and you have replied a handful of times prior to this post without saying any of these concerns.

It can be helpful to click the "reply" button next to someone's post so you are are specifically replying to their comment. Otherwise, I'm confused by who your comment is being aimed at.
edit on 11-10-2016 by FamCore because: typed "off" instead of "of", and corrected it

originally posted by: seeker1963
a reply to: FamCore


This old girl ain't dead yet!

The tree of liberty must be refreshed from time to time with the blood of patriots and tyrants. It is its natural manure," Jefferson wrote in a letter to William S. Smith, a diplomatic official in London, on November 13, 1787.


Isnt it funny how tough words by a rich guy that never saw the horrors of war as a soldier was so quick to Claim the greatness of war?
For Jefferson being so adamant for the refreshing of the tree, he sure didn't volunteer first.

posted on Oct, 11 2016 @ 10:26 PM
link
I do find it funny how alot of people saying the country/election is bought/sold ignore that Trump bought his way to the GOP nomination.

originally posted by: Pyle
I do find it funny how alot of people saying the country/election is bought/sold ignore that Trump bought his way to the GOP nomination.

Trump got the nomination by receiving the most number of votes and electors at the Republican National Convention.


originally posted by: seeker1963
a reply to: FamCore


This old girl ain't dead yet!

The tree of liberty must be refreshed from time to time with the blood of patriots and tyrants. It is its natural manure," Jefferson wrote in a letter to William S. Smith, a diplomatic official in London, on November 13, 1787.

Yea.. That was before nuclear weapons.

If the monsters in charge of those nukes are willing to unleash them, then so be it. What is our other option? Bow down to them?


We all have to die someday. Even the Earth itself will be destroyed by the sun.. Governments will do what they do..

posted on Oct, 12 2016 @ 02:27 AM
link
Private GUNS will hold the country JUST fine kiddies.
They GREATLY fear their mass use,SOME people are REALLY good at that.
The BEST were booted.

And guess how he funded the campaign that got him those votes in the GOP primary. It was not from donations.

posted on Oct, 12 2016 @ 06:37 AM
link
The thing I hate the most, is so many never got to see how great things were for a long time.
I drank many a nickel Coke and 15 cent cherry and lemon-lime phosphate.

I worked many a day for for less than a dollar an hour and always had money in my pocket.

It was good, it really was.
But like someone said in a response in another thread, all things come to an end.

posted on Oct, 12 2016 @ 10:40 AM
link
The root of America's demise (IMO) is when the FED was created. Around the same time Oil was being extracted and there was no competition allowed in.

Money, Power, and Greed has lead to the "corporation" we call America.

We make a ton of money off of drugs, oil, natural gas, climate change, meds, food, and the sell/trade of weaponry. The list could go on and on really.

The once "we the people" are so confused by the programming and propaganda. We have become dependent on a system of slavery and I don't see how we are going to come out of this on top. We are in debt and acting very erratic as we become more in debt. People do crazy things over money and the lack of.... we have been trying to save the dollar with no real solution in site.

Look at what our elections have come to.. I mean REALLY! This election is like watching a Hollywood reality show. It's a shame!!

I have registered to vote however I don't want to vote for any party.. anyone. None of "won" me over, this is for damn sure! 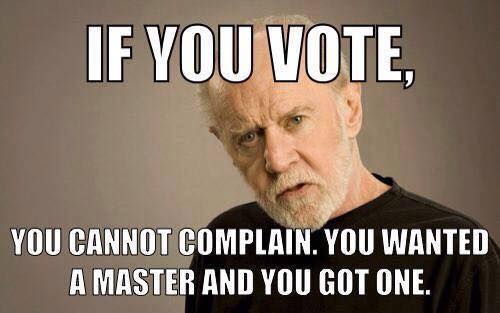 
I have registered to vote however I don't want to vote for any party.. anyone. None of "won" me over, this is for damn sure!

I'm in the same boat - I will not be voting, period.

posted on Oct, 12 2016 @ 03:29 PM
link
I guess maybe, but as bad as it is.. and as bad I see things becoming, I feel very good about my life and that times are good. I done mean pathologically happy delirium.. I mean that if you think times are bad now, you certainly have no chance of surviving things when they are ACTUALLY bad. On the yard stick of bad.. we should be giddy.

It doesnt matter who gets elected, if you plan revolution at this moment in time not only are you foolish, but youre dead and screw it up for those who can launch a real one for concrete reasons in a certain window. Youll know that window when it comes.. and its not whe youre still able to badmouth candidates and keep your life while having the capability/ability/freedom to get a Latte at Starbucks adn go to the grocerty store and get fooods from all over, even fresh and out of season.

SO, not to be an ass.. but cheer up buttercup.. or get on some antidepressants becaue as they say : you aint seen NOTHIN yet...