posted on Oct, 11 2016 @ 11:48 AM
link
Not exactly new technology, but definetly less blurry than the last video I posted
The lady and I somehow managed to get a campsite on angel island for the weekend of fleet week. someone must have cancelled last minute, and I got lucky, because everyone else on the island booked six months in advance!
The island is so far the best spot i've found in the bay to watch the show. I've got to sift through what I took, so expect lots more photos later this afternoon.
Here's a taste of whats to come though: 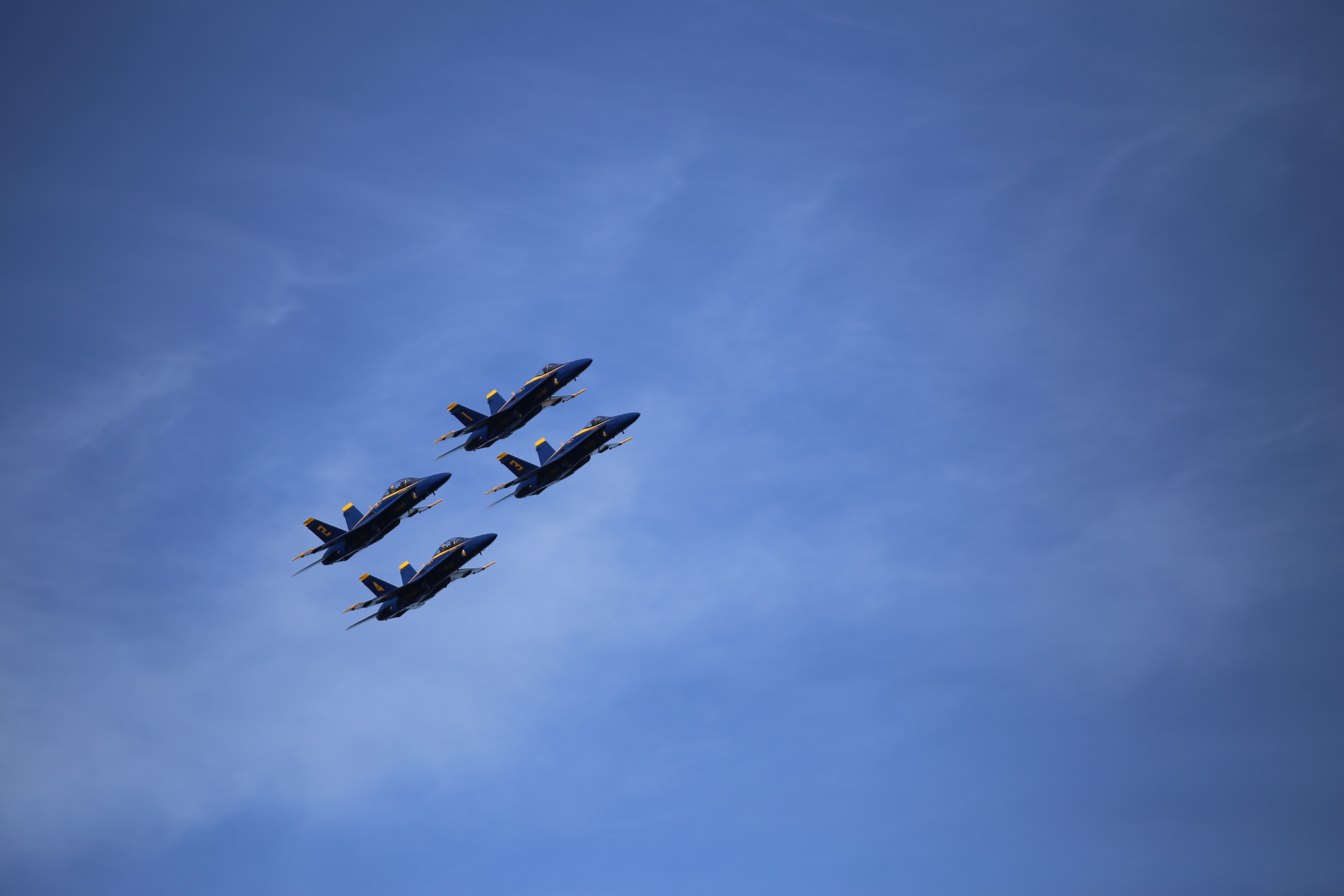 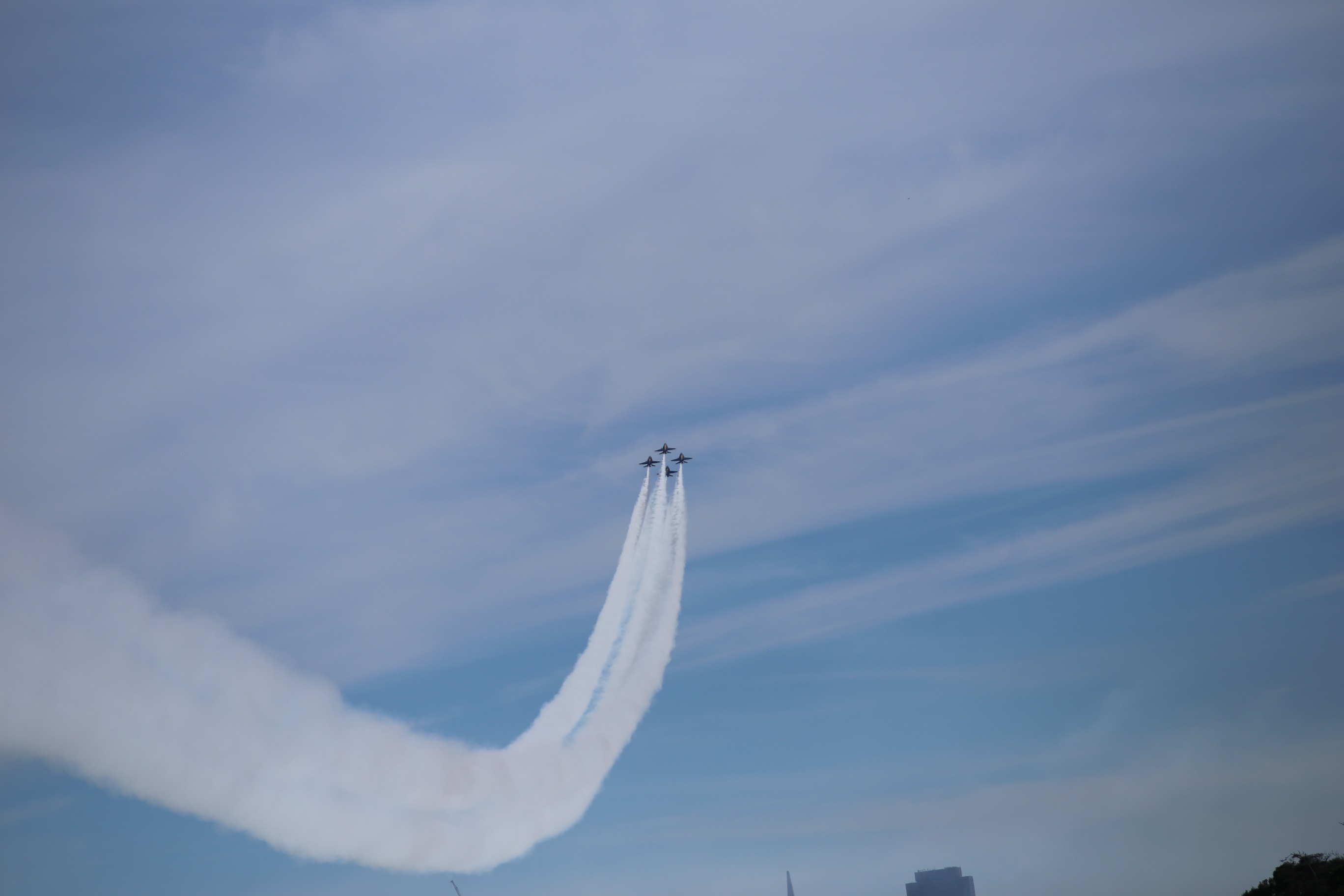 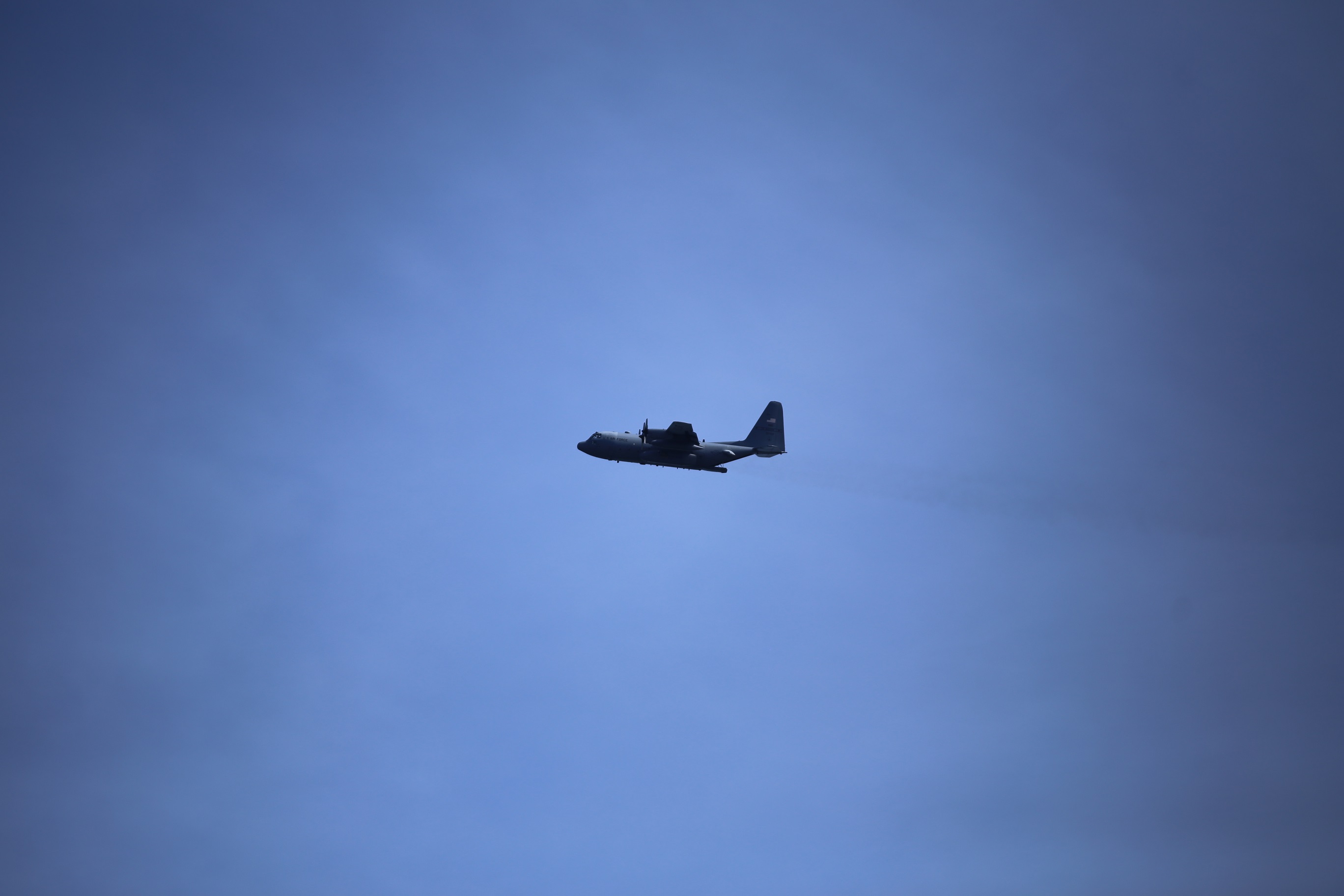 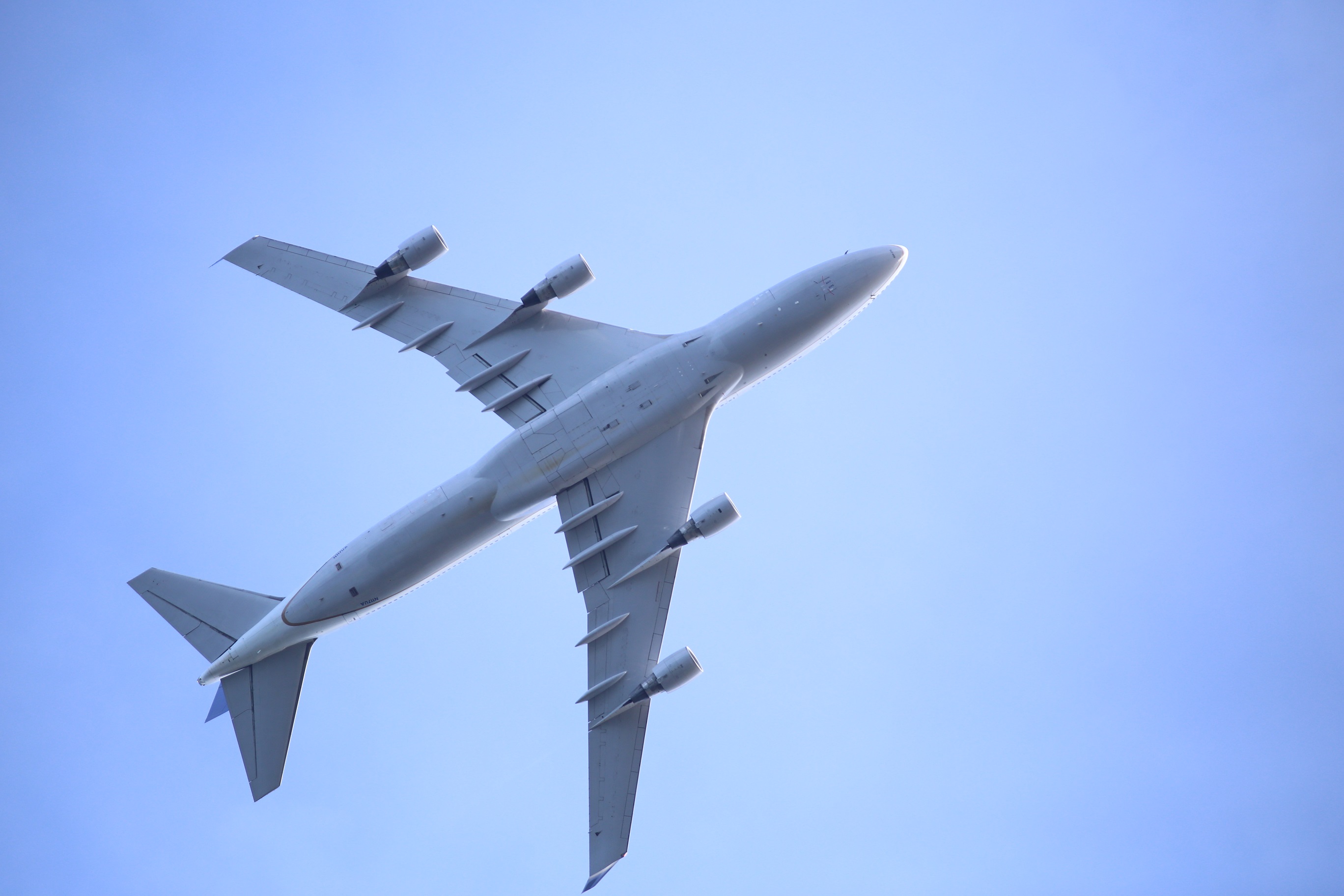 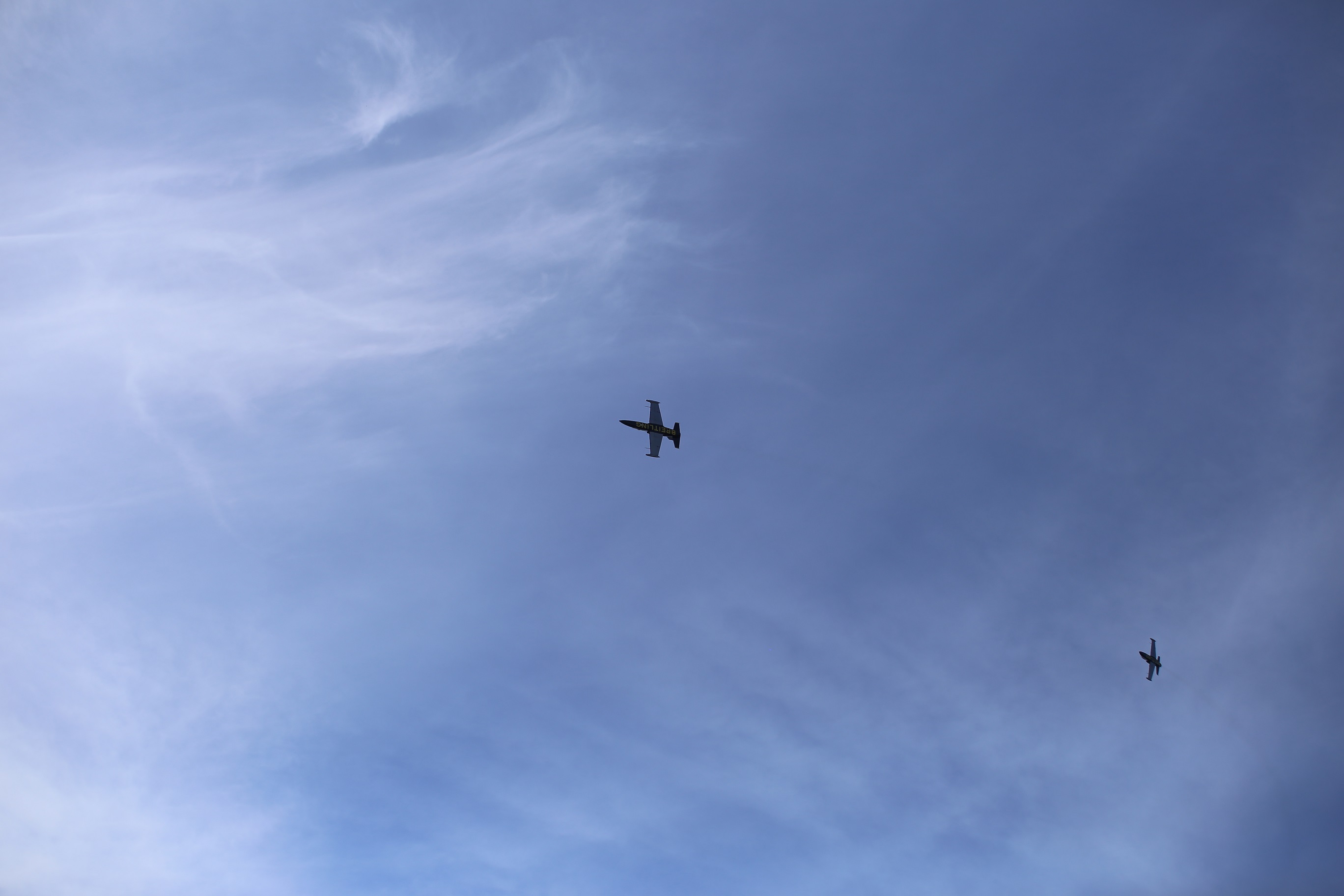 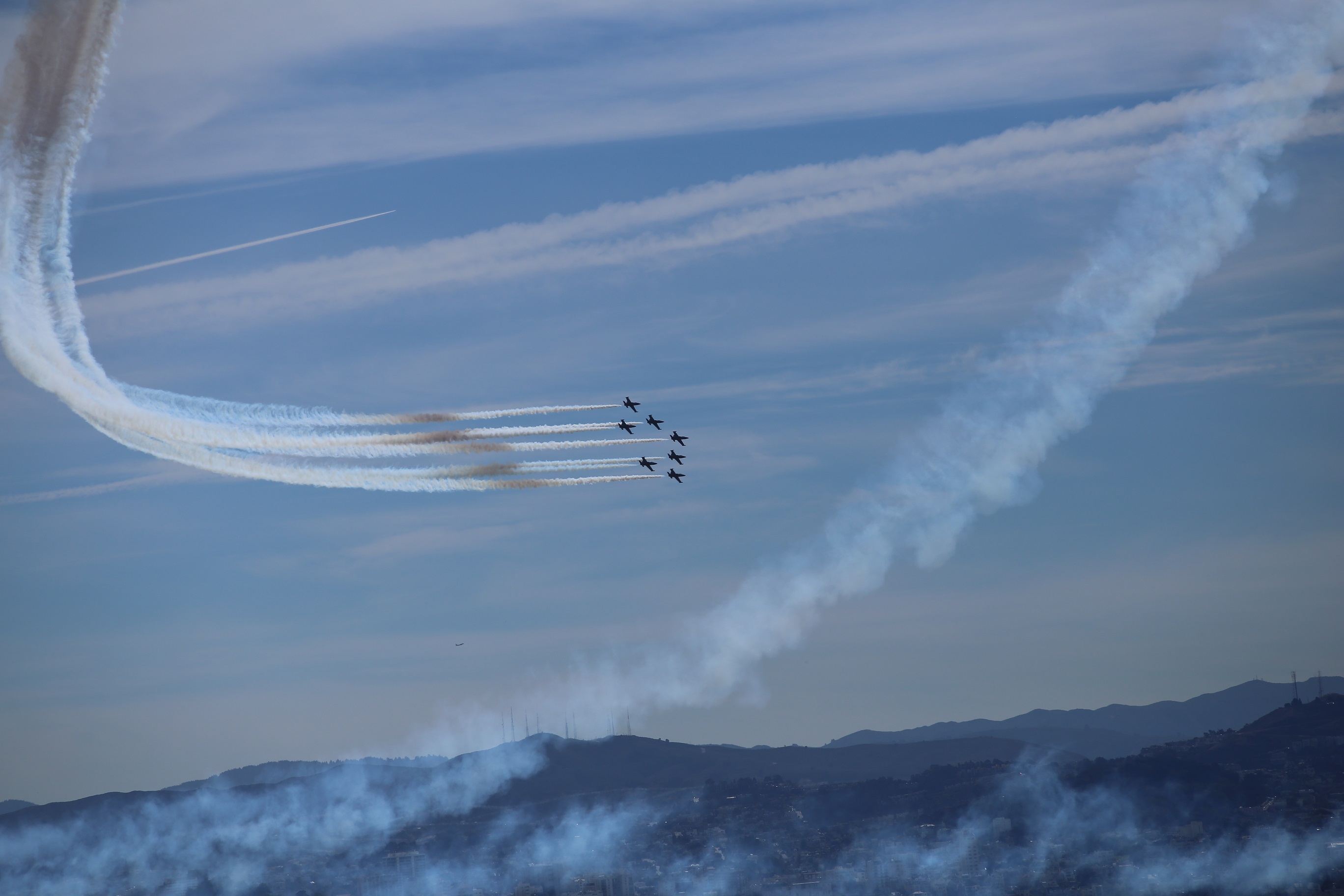 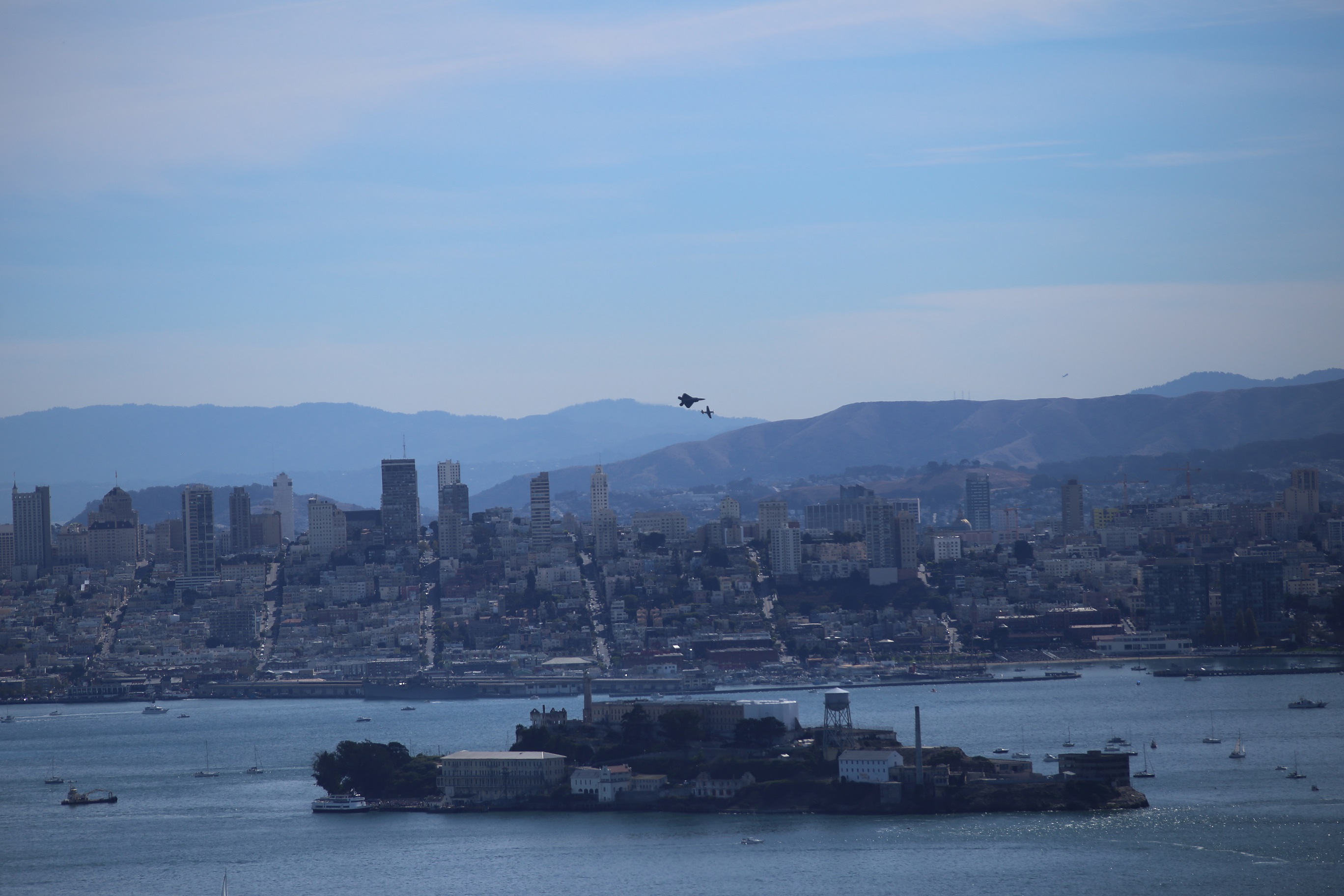 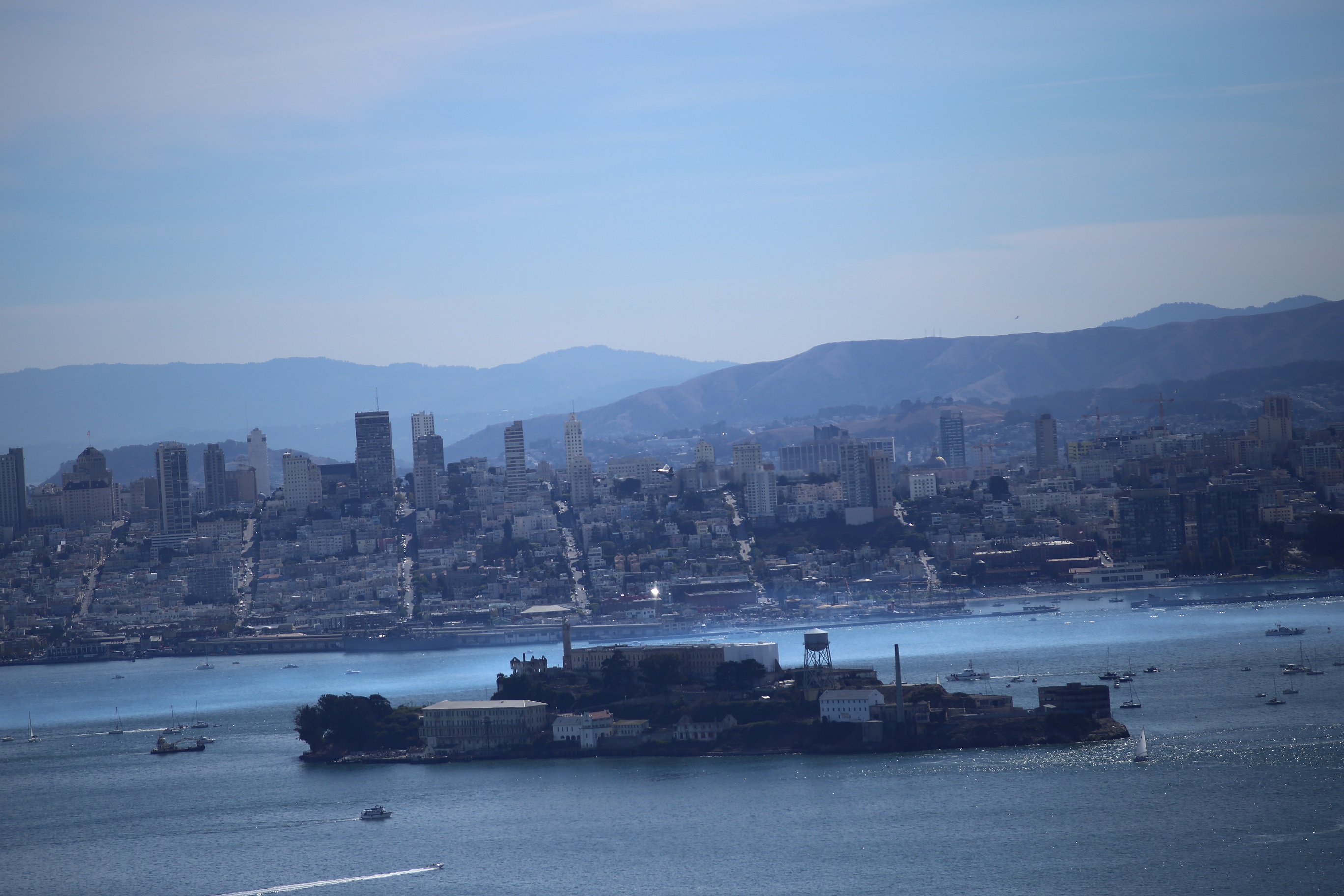 Raptor Demonstration team. Out of the 26 fleet weeks this year, the Raptors showed up for only one demonstration, the bay area. I can't remember who is flying the Stunt plane, but he sure put on quite the show. 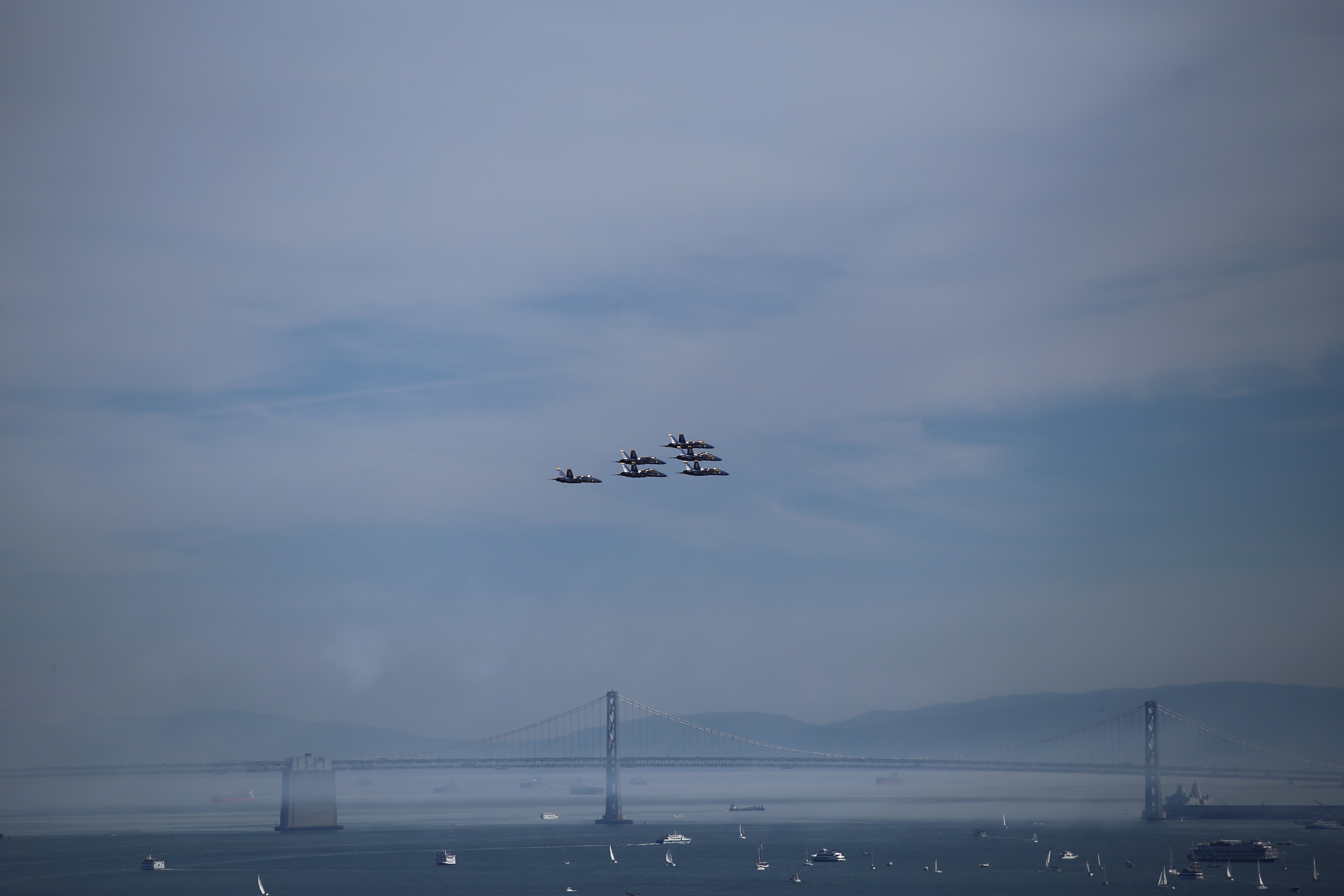 Another Fly over.
Sorry I haven't cropped these, but if you open the image in a new internet browser tab (or download it) and zoom in, the photos are pretty crisp, as I was shooting with the shutter speed at around 1/40000 second.
This lens is the business, especially for plane spotting. Even when you're maxed out at 200MM, the aperture will stay at 2.8 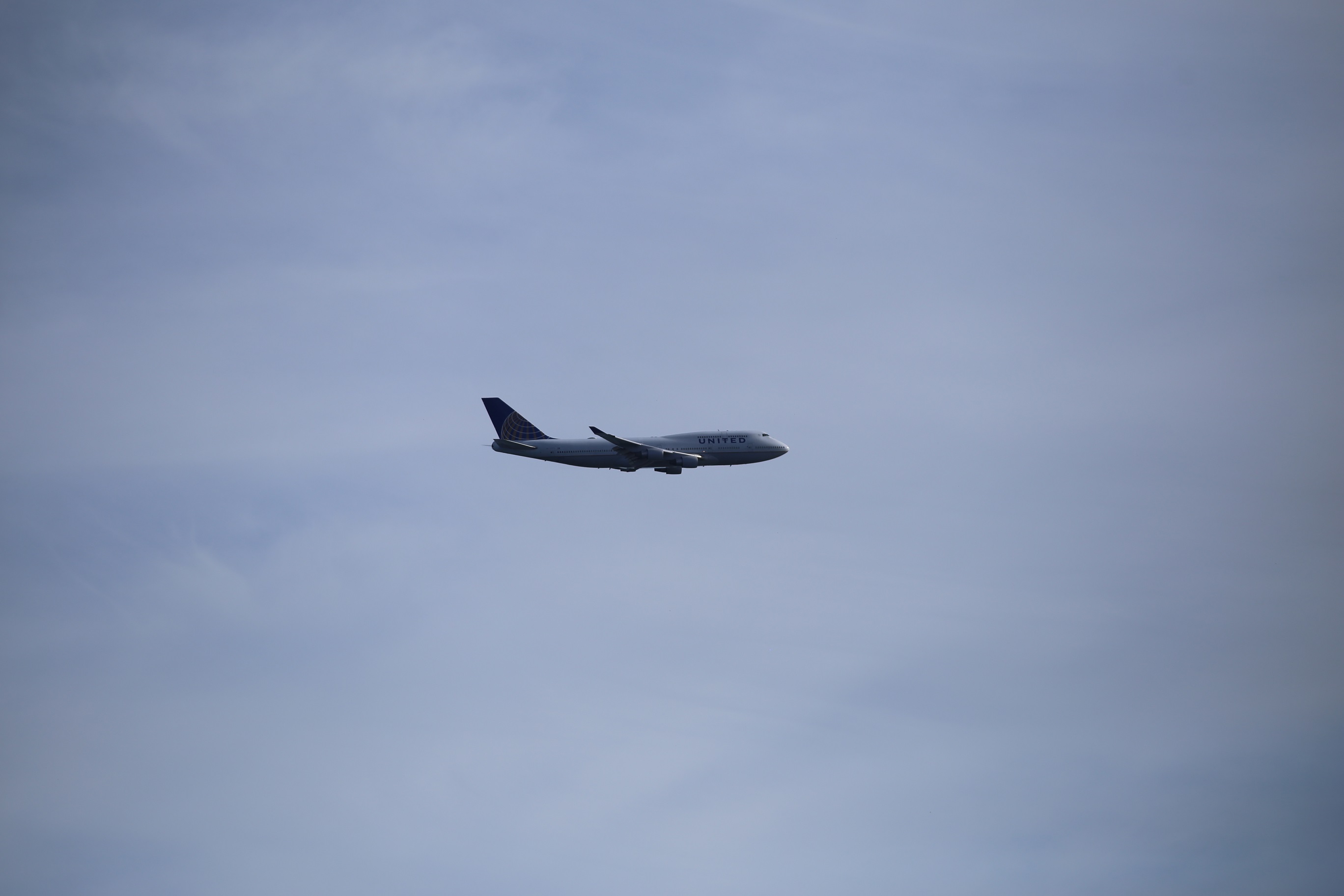 A different view of the Boeing

posted on Oct, 11 2016 @ 01:08 PM
link
Wow, those are some Awesome pics! Fleet week, especially the blue angels, is something that will always occupy a fond place in my heart with lots of memories for me. Some may think that's odd given my beliefs, but I can appreciate the technology, pilots, and coordination required! And many a happy group outing when I was younger to see it all at aquatic park were spent.

Fleet week. A noisy but impressive and in its way beautiful thing to behold every year in my neck of the woods. Come for the planes, stay for the assortment of waterfront restaurants and shops! 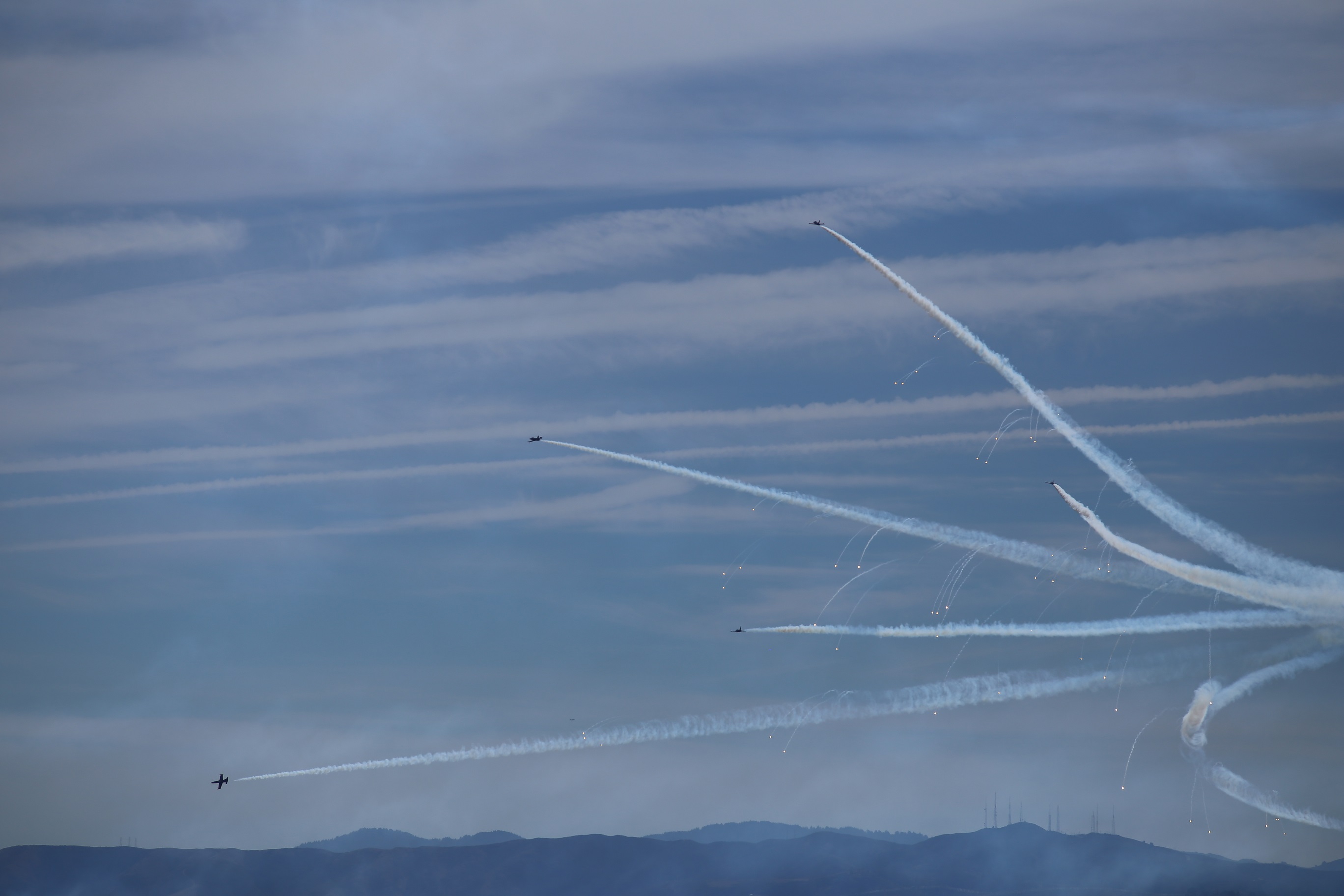 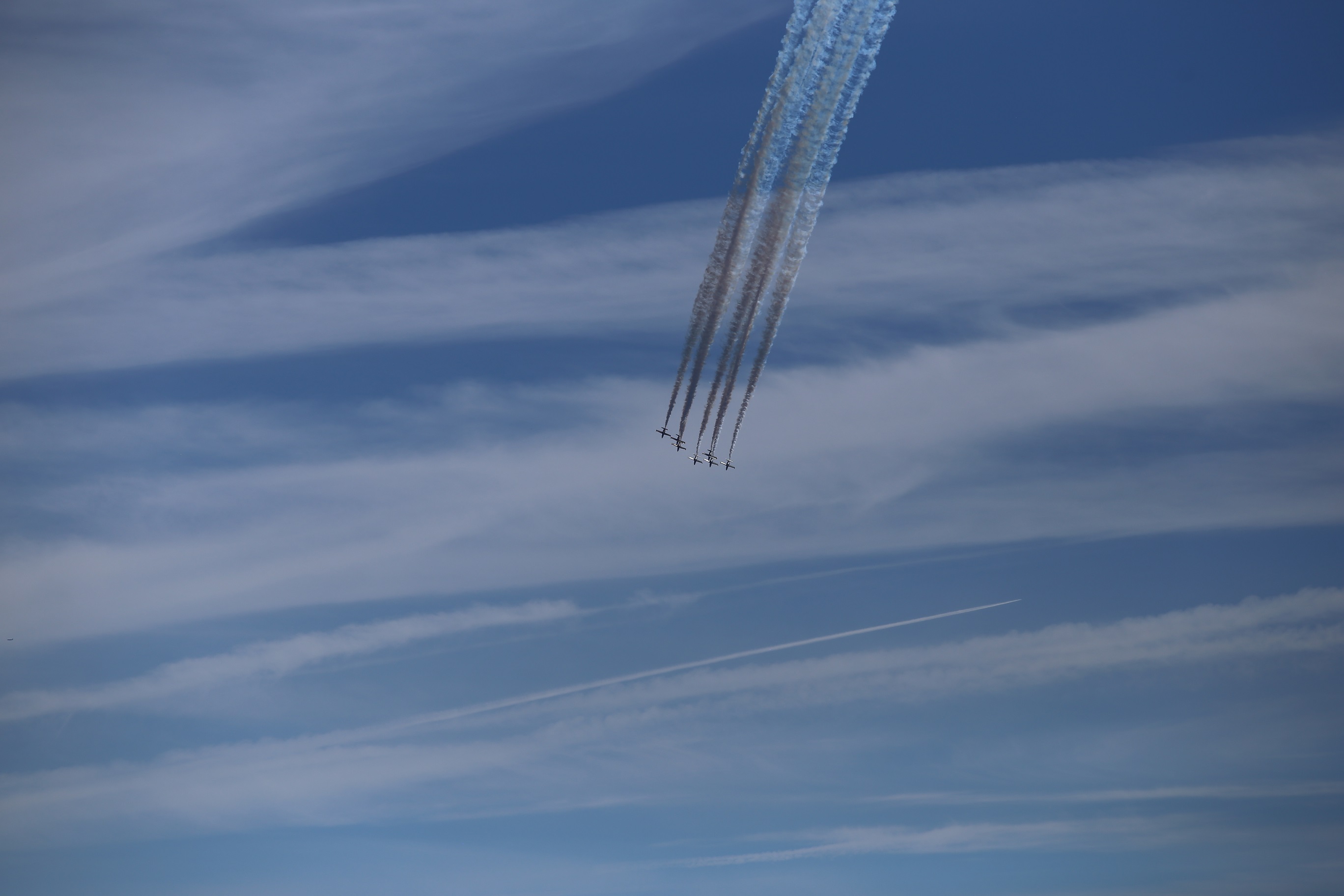 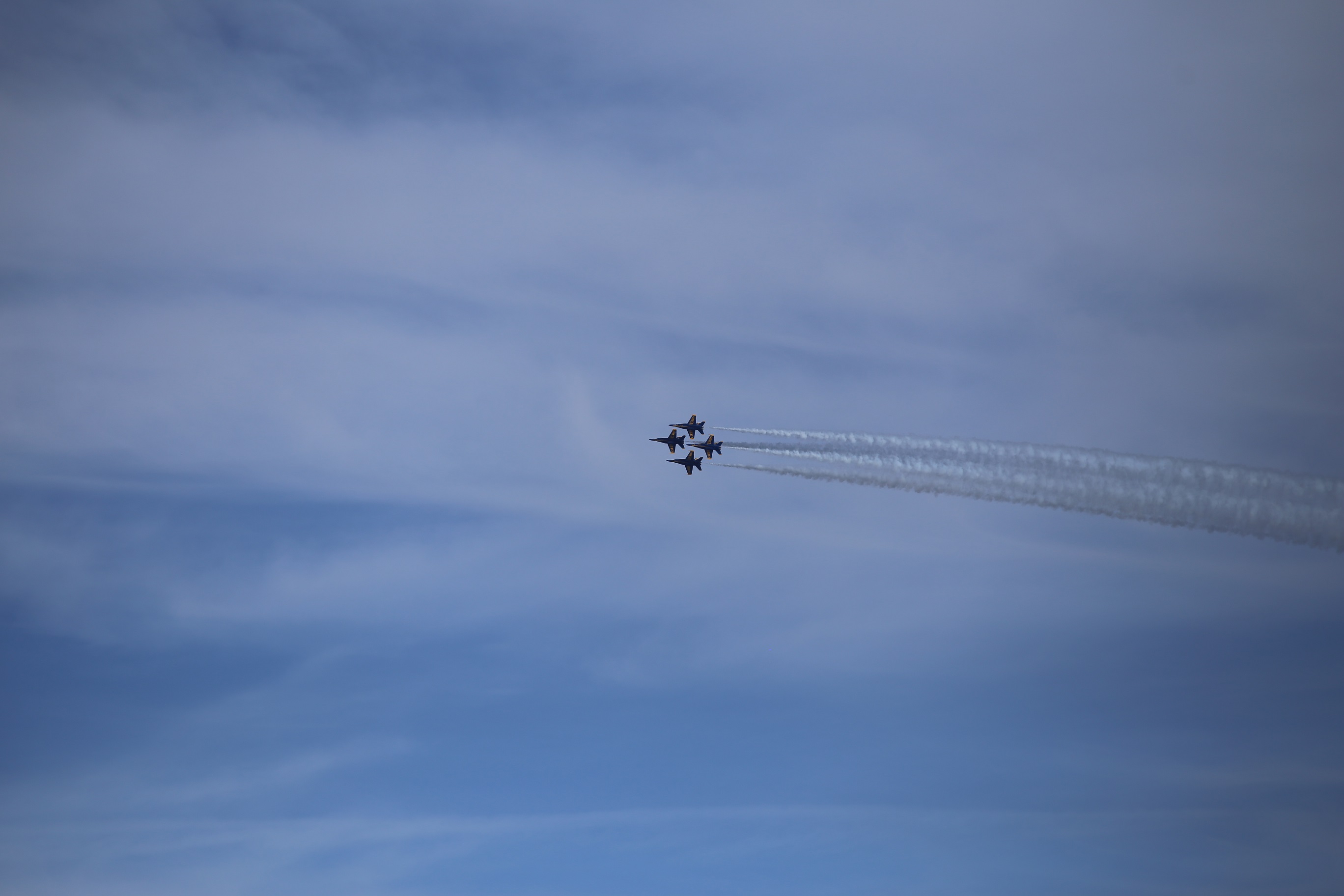 Thanks for the photo love, Ace!
I agree with your thoughts on fleet week Wombat. I think anyone who is lucky enough to see a blue angels demonstration really can appreciate how much skill is involved flying such advanced technology. I took a buddy of mine to the USS Hornet last year to watch the Angels fly.
This guy hates Airplanes, and whenever I bring them up, it goes in one ear, and out the other.
After he saw them fly, he actually will now listen when I talk about military aviation
The same happened at this years show:
My girlfriend has been amazing and has put up with my aviation obsession for over a year now. She visits the museums with me, never rushes us to leave, even if she's tired, bored or anything. She's always been slightly interested/impressed with planes, but it wasn't until this weekend that she had seen demonstration teams in action.
When the blue angels did their first fly over angel island, (they must have been within 1000 feet of us) they passed and flew diamond formation straight into the heavens, I looked down at my girlfriend who was also taking pictures, and I noticed the smile on her face, and the tears coming down her cheeks.

She finally got hit with the plane bug

Another really fun thing to do whilst the Demonstration teams are in the air is to have a scanner radio handy.
The blue angels are hilarious on comm's. whenever they perform a turn in a very tight formation, the lead pilot will throughout that turn say "Puuuuuuuuusssssssssssshhhhhhhhhhhh.......AND BREAK!" maybe its funnier when you see what these guys are doing, and yet are so calm in such a dangerous situation. Sometimes the pilots will even sing songs on comm's whilst flying.
I've mentioned it in earlier posts of mine, but I have a recording from last year of the Angels in Diamond Formation, and the lead pilots wing tip smacked into his wingmans canopy.
Big Whoops.
no one was injured, and I assume the plane was fine, but the RTB command came over the radio as soon as that happened. No one really noticed the early return since they were already 45 minutes into their routine, and it was a Sunday(The final day)

My other half is always giving me crap because she's learned more than she ever wanted to know about planes. But she's always taking pictures as we go by somewhere, and listens to my stories.

She laughed her ass off yesterday, because I took my camera and went walking down to Bell in Amarillo. A while after I left, a Bell security truck pulls up in front of our truck and I hop out.

Great pics, and I'm jealous. That's one of the shows I'd love to get to.

originally posted by: Zaphod58
a reply to: HomeyKXTA


She laughed her ass off yesterday, because I took my camera and went walking down to Bell in Amarillo. A while after I left, a Bell security truck pulls up in front of our truck and I hop out.


Was security not appreciative of your enthusiasm for aviation photography?
What a bunch of meanies. But I'm glad they brought you back
I had a fun encounter with some security last year...

After my love and I visited R-4808N last thanksgiving time (post about the sign change at the front gate I posted last year) we stayed at an inn close by(Red Wagon inn was the name I believe, highly recommend it) after leaving our cabin and sitting down at the restaurant in the main building, I returned to the cabin to get my camera.
I approached our cabin from the rear, rather than taking the lit path, to save time.
Well, when I turned the corner to approach the front of our cabin. I must not have been expected. Because all of a sudden, A white, Ford F-150 raptor parked right outside my cabin hit its high beams, temporarily blinding my night vision, gunned its engine, and vamoosed it double time back to the highway.
I always find myself wondering what would have happened if I hadn't gone back for my camera at that exact time.

Thanks Stingray. We had a great vantage point. Plus that Boeing was REAL low. Definitely a demonstration for the photographers & Plane Spotters at the event
I'll post some pretty cool C-130 shots for your significant other
edit on 10112016 by HomeyKXTA because: (no reason given)

I think they didn't like me taking pictures of their horse statue.

The usual, "we have a no picture policy, do you have id, what pictures do you have (only one they objected to was one of their hangars, so I could zoom in and try to identify the helicopter in it)". It was quite a hike to get back so they drove me back and got the basic truck info at the same time.

She started to get interested when we were leaving a Conway in California that was right next to a small airport. As we were sitting at the light, a T-38 did a touch and go and passed straight over the top of us at about 50 feet.

We would occasionally launch one or more B-1s early in the morning (you want to talk loud). They'd get airborne, make the right turn for noise abatement, then turn back left, and stay in full afterburner, making a very slow climb, until they were past the far end of downtown Honolulu. If anyone complained, the excuse was they were fully loaded and needed the power to climb.

So true. Fleet week creeped up on me so quietly, this year, I didn't realize they'd be flying through the weekend until last Tuesday. Didn't hear about the F-22's until Thursday
I still can't believe I was fortunate enough to get a campsite. They're next to impossible to reserve at the last minute. Most everyone I spoke with Booked these sites in March. But even without a camp site, it still would be a great day trip.
You don't even need to climb to the summit of Mt Livermoore, there are plenty of places en route that are a higher elevation than Alcatraz, so you get to see all the action without anything In the way.
I'll post the Coast guard demo and more KC-130 pics in a few hours.

There was a HUGE scandal many years ago, when Microsoft was the go to earth program. It was mostly the fault of the shipyard, but still...

I think it was Bangor. They pulled a Boomer into Drydock for a routine overhaul. Normally before they lifted the dock, they shrouded the screw, as it's one of the most closely guarded secrets of sub design. This time, they didn't. And it hit the net.
edit on 10/11/2016 by Zaphod58 because: (no reason given)

Oh man, that's bad. It's amazing to think how many in the intel world probably browned their pants when they realized how powerful civilian satellite imagery was.
Seems like Microsoft earth really let some big things out. But seriously...how could the armed forces drop the ball on something like that....
I'm reminded of your post regarding 1995 (I think that was the year) and a Microsoft earth bird took a photo of something at an air base that should have been in a hangar
I've tried looking for even a mention of that event. Nothing. The non-deep web internet has been scrubbed clean of any mention/image of that incident.
I have a friend who used to work for Microsoft, I believe in its mapping department. I'll see if he can shine some light on that incident.