posted on Oct, 10 2016 @ 08:01 PM
link
Awwwwww! Don't get your hopes up too high that your candidate is really going to take it to the establishment Trump supporters! Donald Trump's Virginia campaign chairman just got the boot after protesting the RNC's mistreatment of Donald Trump outside of RNC headquarters.

Corey Stewart, Donald Trump’s Virginia campaign chairman, was fired Monday afternoon for organizing a public protest of the Republican National Committee, which he argued had been insufficiently supportive of Trump’s candidacy.

“They threatened to fire me if I didn’t shut down this rally,” Stewart said in a phone interview. “They had me fired, it’s really that simple.”

He said it was close Trump adviser David Bossie, a Maryland member of the RNC, who demanded his ouster. Bossie wasn’t immediately available for comment.

Stewart described his ouster as “unsurprising” because the campaign and RNC are attempting to present a united front at a time of turmoil for the campaign. He said the protest, which he organized with Virginia Women for Trump, a grass-roots group, was an attempt to send a message of defiance to the GOP establishment and encouragement to Trump, who he still supports.

Hours before his firing, just as the protest at RNC headquarters began, Stewart accused the RNC of withholding resources from Trump’s Virginia operation and using the weekend leak of Trump’s sexually aggressive comments about women as a pretense for pulling the plug. 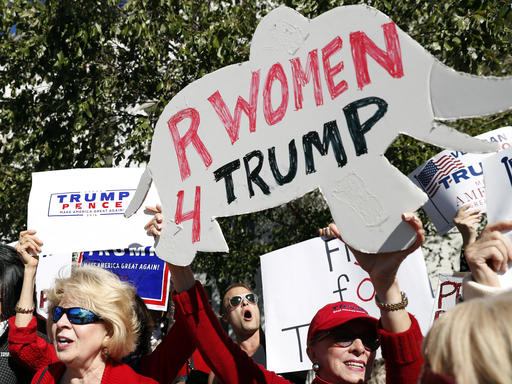 I read another source that also pinned it on David Bossie, President and Chairman of Citizen's United (united to get more of that establishment dark money into the GOP establishment) which I find particularly hilarious.

You see folks, only Donald Trump is allowed to let the deplorables out of the basket. Can't have them taking it to the establishment all by themselves can he?

Bad useful idiots! Bad! Get back in the basket!

posted on Oct, 10 2016 @ 08:24 PM
link
a reply to: theantediluvian
Don't worry Trump can take the heat, he's a Sociopath, they have no feelings, except for themselves.

Think about what you just posted!

Your blind aggression could be considered a mental illness? roflmao
edit on 10-10-2016 by seeker1963 because: (no reason given)

posted on Oct, 10 2016 @ 10:36 PM
link
The GOP is in total chaos. The White House is lost and the Senate appears to be as well and if things keep going this way Trump will take the House down with him as well.

If your in down ticket race in the GOP if you support Trump then you lose Democrats, Independents, Women and College educated white male Republicans thus you lose the race, if you do not support Trump you still lose Dems and also Trump supporters and are left with Educated white GOP voters and more indies still not enough to win the race.

The GOP has gotten itself into a real pickle. To make matters worse Trump is so off the rails he will waste time attacking his own party. Granted the election is lost but, he could at least try and help the down ticket races, instead he will try and take the entire GOP down with him.