Can anyone i.d. this aircraft? 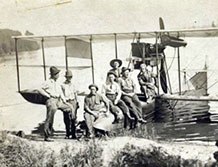 While doing some local history snooping, I came across this pic. Would love any info as it was my area's first fire spotting / prevention aircraft. Thanks.

Select one from the link i provided. 😊


It is here, an article all about it.. Ole Evinrude is mentioned and a pic is shown:

Thanks for the links and info Bigburgh! Spot on. Local historians were digging through articles and saved the picture so I could scan it. They were curious of the make to see if they could find a purchase order as a few aircraft were simply listed as aeroplane/state of Wisconsin. Thanks again.

Awesome, nailed it the first try👍

Thanks JimNasium, apparently it made its way to my neck of the woods and landed on the iron river, and flew over the brule river where the president was visiting during a trout fishing vacation. Thanks for the link will print it out and bring to the ladies.

It's interesting to note that Miami Springs was the home to Glenn Curtiss.

And his mansion and hunting lodge still stand in Miami Springs.

I was tempted to buy the lodge since it was for sale.

The guy was a pioneer in aviation.