Are aliens moving the moon, again?

posted on Oct, 10 2016 @ 01:00 AM
link
Many light years ago, in another galaxy, it was decided that the planet earth needed a companion. So they hauled an abandoned small planet into orbit around earth and because they decided to not bother sending the "hauler" back they disguised it and placed it in Crater Tsiolkovsky. At least that is approximately what former ATS member John Lear wants us to believe.

Lear also argued that the moon was towed into its current orbit by a huge electromagnetic vehicle, and that vehicle can be seen in a photo taken of the moon crater Tsiolkovsky.

I don't know about that but it seems too far out to accept. However, some time back someone pointed out that our moon seems to be subject to erratic behavior that can be observed and photographed by earthlings. Since I wasn't that savvy, and I still am not, about proper orbits, rotation, etc. But the notice did catch my attention and now I present some photographs that show that the moon is moving clockwise as evidenced primarily by Crater Tycho. Perhaps there are members here who can show me the error of my ways.

The moon orbits the Earth once every 27.322 days. It also takes approximately 27 days for the moon to rotate once on its axis. As a result, the moon does not seem to be spinning but appears to observers from Earth to be keeping almost perfectly still. Scientists call this sybchronous rotation.Feb 28, 2014

posted on Oct, 10 2016 @ 01:12 AM
link
The orientation of the moon will vary slightly depending on its libration, and a lot as a result of the location from where you are viewing it.

posted on Oct, 10 2016 @ 01:39 AM
link
Exhaustive analysis of moon rocks show that the isotopes of oxygen and titanium and relative quantities thereof, are effectively the same as Earth’s and different from elsewhere in the solar system. So, no, it is not a drive-up moon.
edit on 10-10-2016 by charlyv because: spelling , where caught

Again? When did they go the first time?

Any place that has kangaroos...is just...

originally posted by: Village Idiot
We need to get a message to these aliens and get them to take the moon away......

LOL. We sh old send someone to put parking tickets on it.

originally posted by: seagull
a reply to: Phage


Man alive! That country is f*cked up.

Since the subject matter of the OP has already been addressed with regard to the issue of the Moon and its behaviour, I must point out one other thing about your OP, which requires addressing.

Lear, like many before him with similarly fantastical claims, is nothing more than a salesman. A personage whose sole task is to sell an idea, and preferably get an awful lot of speaking fees and book sales, out of claims which even the smallest element of scientific awareness could put holes the size of a navy destroyer in.

Collier, Greer, Lear... these individuals have in common one overriding principle. Tell nothing but lies, make nothing but profit, spend as little money as possible doing it. They are the conspiracy equivalent of snake oil salesmen. Take little to no heed of their nonsense, since they singularly fail to provide evidence which actually supports their claims, leave alone proof which stands up to scrutiny.

posted on Oct, 10 2016 @ 07:48 AM
link
Nibiru is coming soon....maybe they will pre-position it to protect the Earth from bombardment by space rocks.

You forgot to mention Hoaxland sorry Hoagland in that sorry band

Have you met John Lear? Sat with him for any length of time? Obviously not. You clearly don't know him. He is nothing that you said and very much a quiet man, stepping out into the public when he feels compelled to help shed the light of truth on a subject important to him, to all of us.

But, the topic is the Moon and not John Lear, right?

The subject of this thread is unsubstantiated BULL about the moon, not about the moon itself, which is only doing now, what it has always done in accordance with the physical principles governing it, and all other bodies featuring mass.

If Lear is so different, perhaps he should explain why his science free approach to thought on these matters is any more relevant or important than the waffle of others who exhibit the same total lack of devotion to what can be proven scientifically.

Even the link doesn't make it clear -- the moon is NOT wobbling, our observation platform -- Earth -- is moving up and down relative to the moon's axis. The moon is rotating straight and true around its own axis. OUR relative motion is what makes the 'libration'.

The fact that the moon's axis is so much closer to right angle to Earth's orbital plane around the sun is the weird factor that frustrates collisional origin theories. All planets should have coalesced originally with axes ;perpendicular to their orbital planes, with later collisions knocking some of them akilter. The moon's axis orientation is what creates the situation of polar craters whose floors are perpetually shadowed -- the sun never rises high enough to illuminate [or warm] them. The same situation holds on sun-scorched Mercury, of all places, which is why ice deposits have been found in polar craters THERE as well.

originally posted by: OneBigMonkeyToo
The orientation of the moon will vary slightly depending on its libration, and a lot as a result of the location from where you are viewing it.

True, and there is also this to consider: 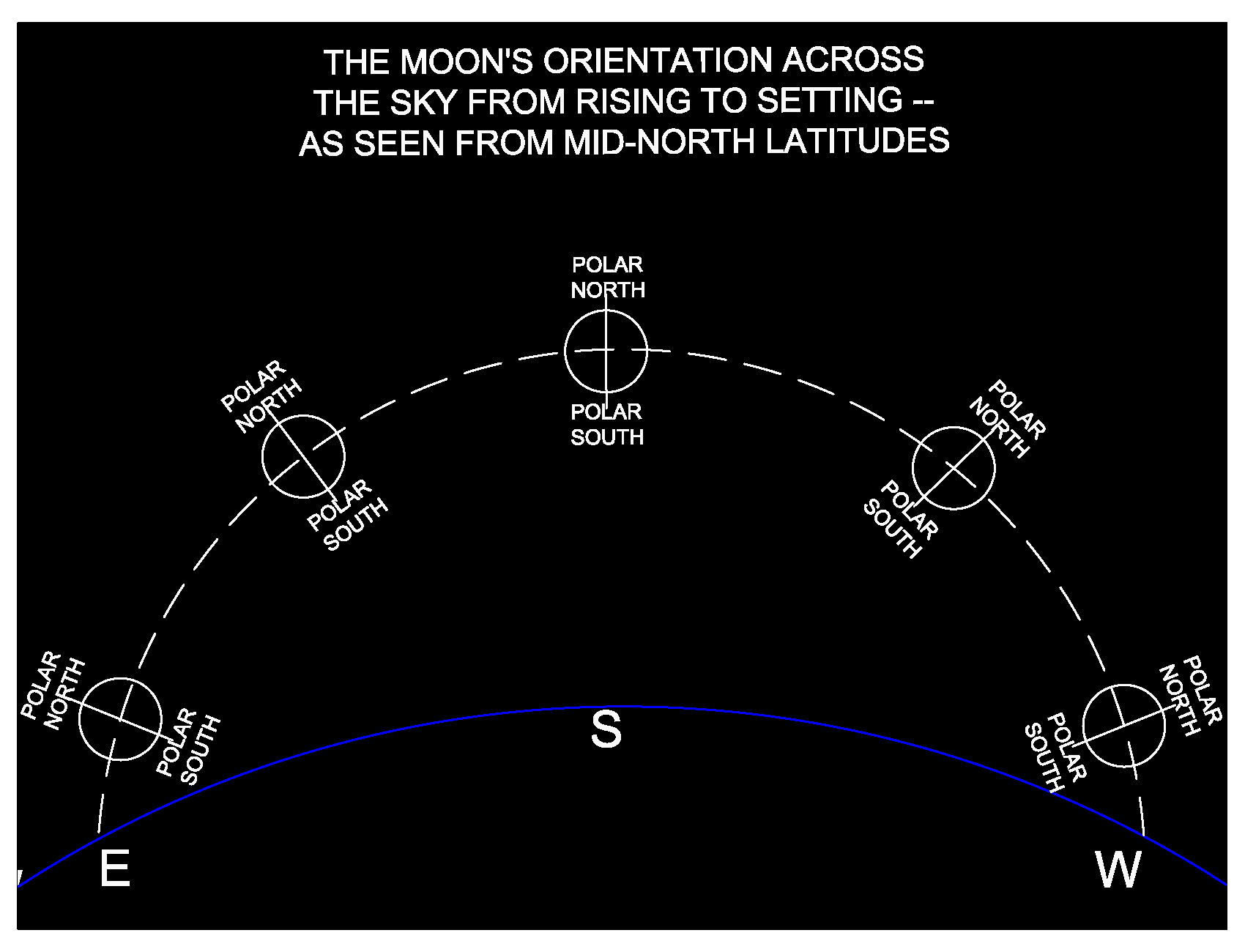 The apparent orientation of the Moon (the orientation as seen from Earth, relative to Earth's horizon) can change from moonrise to moonset. The amount of this effect varies with moon phase and time of the year, but this is in general what happens.