I know I can’t post a link to the direct wikileaks emails, but the email id is 1120, so you can search for it yourself. The contents below were in the email attachment. I hope I don't violate any rules posting a screenshot. 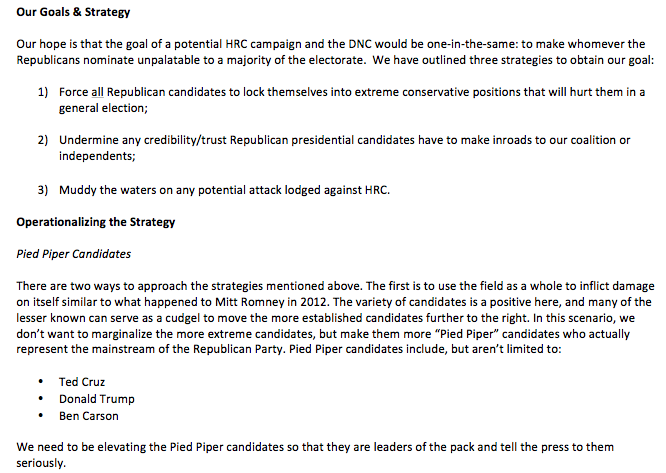 
The above is pretty self-explanatory.

This email happened before Trump announced his candidacy, perhaps they knew in advance because they convinced him to run in the first place? Perhaps the Clintons manipulated him into running? They were all friends once, after all. (pure speculation)

It looks to me like Trump was indeed used as controlled opposition, but I think Trump had no idea he was being used. I mean, why would anyone willingly participate in a scheme that would ruin their own reputation?

The above isn't criminal (as far as I am aware), it is just interesting and I thought I'd share.

edit on 8-10-2016 by primespickle because: (no reason given)
edit on Sat Oct 8 2016 by DontTreadOnMe because: added links so the attachment can stay

Strange how the three candidates they named were the ones that made the final debates......

Doesn't matter, the republican base chose trump because he represents their real values.
They should be more judicious in the company they keep.

Trumps failings are not the fault of Madame President Hillary or democratic consultants, they lie squarely with trump.

The republican voters in this country chose this bloviating gas bag of a buffoon because that is what they wanted.

Maybe I just missed something recently, but who originally sent this, who was it sent to? Was this from the DNC dump?
Taking it at face value, it's very interesting indeed.

Truth of the matter is it's a one party system split into two to make the public think they have a choice.

2 wings on the same bird as no matter who you vote for the Government gets in but in the case of Trump it's blatantly obvious that he is the face of a populist movement that has the establishment trembling because they never envisioned to get so much support despite himself.

Maybe I just missed something recently, but who originally sent this, who was it sent to? Was this from the DNC dump?
Taking it at face value, it's very interesting indeed.

There is much context and detail missing from the leaks.

Sorry , but that just does not Pass the Smell Test . Mr. Trump is Very Unpredictable , Loose Cannons are not easily Controlled .
edit on 8-10-2016 by Zanti Misfit because: spelling

Strange how the three candidates they named were the ones that made the final debates......

No wonder people refuse to admit the obvious... it is quite painful when the reality that you have been brainwashed into believing is shattered before you!

The power of those behind the screen is blatant here and lets be honest it has absolutely nothing to do with "Democrat or Republican" it is simply what the social engineers decide is in their best interest.

To quote the infamout Edward Bernays in his quite revealing book Propaganda, written in 1928!

The conscious and intelligent manipulation of the organized habits and opinions of the masses is an important element in democratic society. Those who manipulate this unseen mechanism of society constitute an invisible government which is the true ruling power of our country.

We are governed, our minds are molded, our tastes formed, our ideas suggested, largely by men we have never heard of. This is a logical result of the way in which our democratic society is organized. Vast numbers of human beings must cooperate in this manner if they are to live together as a smoothly functioning society. Our invisible governors are, in many cases, unaware of the identity of their fellow members in the inner cabinet.

The bastard had the hubris to call this "democracy"!

Months ago, and numerous times since, I have personally outlined this precise plan and tried to tell people that this was what was happening and I'll be goddamned if things have not unfolded exactly how I said they would. I could take photos of all my notes and post them for proof, but I'm not even going to bother. I started getting very freaked out when the dirt started to flow on Trump, right on schedule...now I just feel like crying. Wow. I don't even know what I'm feeling right now.

Trump absolutely knows. He agreed to it. However, they never planned to follow through with their end of the bargain, and if he hasn't realized that yet, he's going to very soon. And I said that was going to happen, too, on a thread in this forum several months ago. I believe they lied to him too...what do you call that, when someone is playing the person who thinks they're playing everyone else? It's like that. From the very beginning, it's been like that. Holy #. I need to go take a walk. I'll be back later.

originally posted by: Greggers
I'm puzzled by the last line of that email. What does "tell the press to them seriously" mean?


I think it's supposed to read "tell the press to take them seriously". That would fit the context of the other parts, which describe elevating the extreme right wing candidates to prominence.

Maybe the Russian to English translator had a problem.

originally posted by: Greggers
I'm puzzled by the last line of that email. What does "tell the press to them seriously" mean?

I think they've just left the word "take" out by accident.
"tell the press to take them seriously", referring to the Pied Pipers I assume.

Edit: I see the fella above pointed this out already.
edit on 8-10-2016 by AbdulAlhazred because: (no reason given)